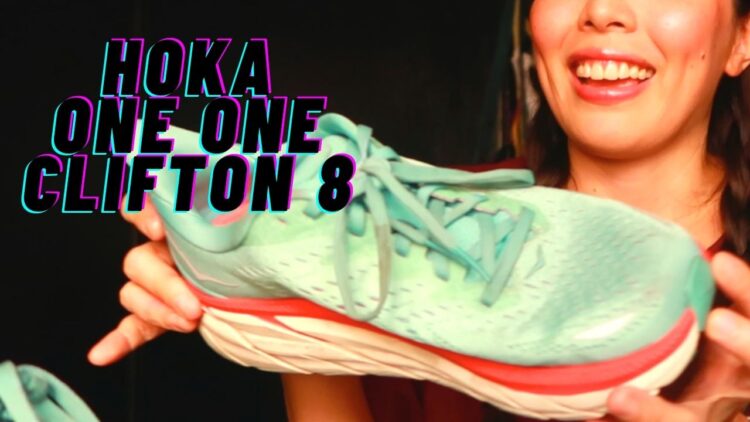 Back in September I received the Hoka One One Clifton 8 to review, but I wasn’t able to run in it right away due to my injury.

By the time I was ready to run again, I had to start at a really low volume so I decided to hold off on doing my review until I had logged more kilometers in the Clifton 8.

Watch my vlog review below or scroll on for some highlights.

I found that because the Clifton 8 feels like a traditional running shoe (rather than the super shoes I was running in before I got my injury), I felt comfortable and confident starting my running journey again in it. The Hoka One One Clifton 8 has a padded tongue and heel counter, a thick EVA midsole that’s signature for Hoka’s maximalist cushioning, a blown rubber outsole for durability, and a 5mm heel-to-toe drop balanced by rocker geometry. In other words, it felt very familiar and I didn’t feel like I had to change how I ran in order to stay pain-free.

In my Hoka One One Clifton Edge review from 2020, I liked how much cushioning it gave me, but didn’t quite appreciate the shoe’s elongated heel and the lack of an outsole that saw me wear down the midsole foam by the time I hit 50 kilometers. The Clifton 8 hews closer to the concept of the Clifton line as an everyday trainer: good for easy miles as well as tempo efforts.

I’m not running very long distances (I have built up my runs to last an hour long now, though), so I can’t say if the Clifton 8 feels good for a marathon. I do have this to say: even at the short distances and slow paces I run, I never feel beaten up. This is a big thing if you haven’t run in a while, have gained weight, and/or run slow, because the added pounding usually doesn’t feel good for hips and knees.

With regard to paces, I have been running the gamut from six minutes per kilometer all the way up to nine minutes per kilometer. The Clifton 8 is pretty much capable of taking you to whatever pace you want to go; however, it’s not as springy as other shoes, so it might take a while longer to get that pace up. Once there though, it’s easy to maintain your chosen pace.

I’m probably a little bit superstitious in that I currently do all my running in the Clifton 8. Right before I got injured, I was wearing a few other shoes very often; part of me can’t shake the feeling that they contributed to my injury (even though actually it was poor glute activation that did the deed).

The Clifton 8 played a major role in getting me back into and keeping me running during this recovery period. I’m very thankful that Hoka Philippines sent them to me when they did, because I don’t know if i would have been as bold getting back into running if i didn’t have the Clifton 8 in my arsenal.

I know these aren’t the freshest, hottest shoes on the block; at this point they’ve been on the market for about six months already. But I am here to tell you that they are a good buy if you’re looking for something that’s a steady everyday neutral trainer.

The Hoka One One Clifton 8 is now available at Planet Sports Abreeza, Veranza, Trinoma, Cebu & Greenhills, and Runnr BHS and Cebu. Follow @hoka_philippines on Instagram and HokaPhilippines on Facebook. Shop for Hoka One One online at the PlanetSports Viber store.