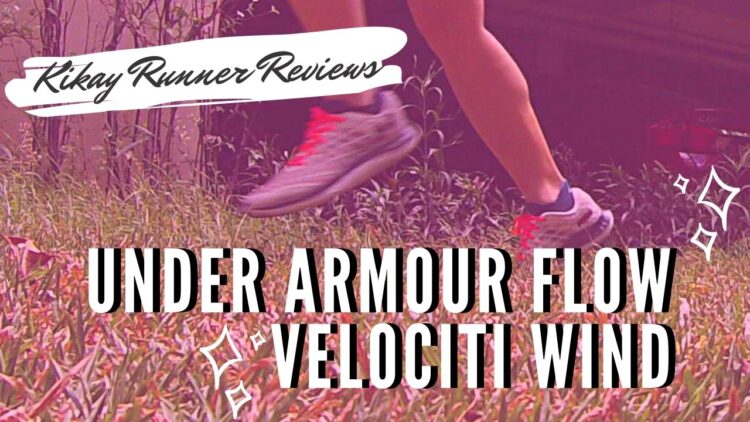 After running in the Under Armour Flow Velociti Wind shoes for a month, my first impressions about them were confirmed — but also the shoe seems to have grown with me.

I initially found the fit to be a little snug, but as I continued using the Flow Velociti Wind, the Warp upper started accommodating the shape and movement of my feet. I’m happy to report that all of my toenails have survived some increased mileage this month.

The Flow Velociti Wind also felt good whatever kind of run I was doing, whether it was sprint intervals, longer tempos and threshold runs, or even easy “time on feet” runs. And because they have the UA Connected feature which links via Bluetooth to the MapMyRun app, they log distance, pace, cadence, and even footstrike angle. This made me quite conscious of keeping my cadence up and avoiding overstriding, which had the net effect of making my run form a bit more efficient. Thanks to this I also felt less stiff and beat up in my knees and hips even after hard runs, even with the UA Flow midsole being thinner than the maximalist cushioning shoes I’ve previously run in.

Watch my vlog review below, or scroll further for a quick written recap.

I ran twice this month in different pairs of shoes just for comparison’s sake. I think among the shoes I have in my rotation, the adidas adizero Boston is closest to the use case for the Flow Velociti Wind: they’re meant as marathon trainers for elite runners, but for recreational runners like myself I use them for distances up to 10K.

I really like the UA Flow Velociti Wind. I think its only cons are: how much dust the Warp upper can pick up because it’s got a lot of crevices in its wide weave, and how the Flow midsole wears away.

For problem number 1, you can remedy it by buying a darker colorway and/or washing the shoes more. For problem number 2, there’s not really a solution because the midsole is unprotected by blown rubber. I’ll keep running in these shoes to see if they’ll absolutely flatten and become slippery, or if the Flow midsole will retain its grippiness despite being worn smooth. I do think that if I were running on softer surfaces like packed dirt instead of concrete, the midsole wouldn’t wear out as fast.

I’ve written about the UA Connected feature on a previous pair of Under Armour shoes. I think there must have been some sort of upgrade to the chip embedded in the shoe, or in the MapMyRun algorithm that extracts and interprets the data from the chip. Communication between the shoe and the app was much snappier, and the shoe recorded and reported all of my runs unlike the HOVR Machina that failed to record my last few runs in the shoe (I actually gave up trying to sync the shoes).

I’d say that the P7,995 price point for the Flow Velociti Wind is well worth it if you don’t already use a fitness watch to log your activities, and you also get the nifty cadence and footstrike analysis that helps you tweak your form as I mentioned above.

Unlike other shoe tech trends where you definitely feel (or are made to feel) the bounciness or cushioning underfoot, the Under Armour Flow Velociti Wind gives your feet and body just enough protection, then gets out of the way so that you can run your way. It matches with the way I like to run, and that’s why it’s entering my shoe rotation. Do check it out if you’re in the market for a fast lightweight shoe.

The Under Armour Flow Velociti Wind is now available at Under Armour stores in the Philippines, retailing at P7,995. For more information, follow the official Philippines Under Armour distributor on Instagram at @athletesproPH.