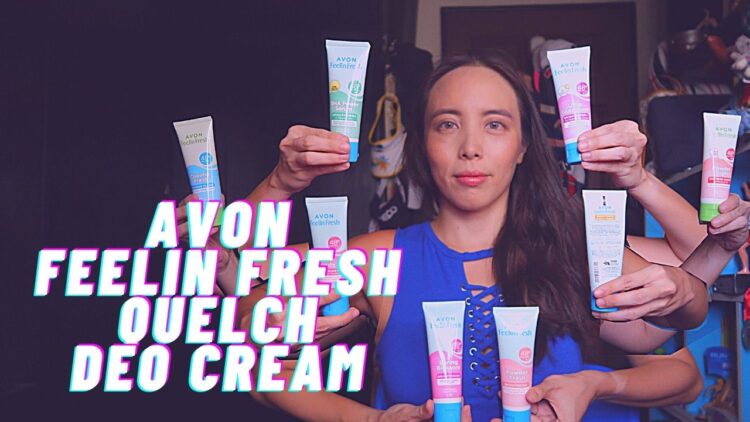 I don’t mind getting sweaty when the situation calls for it, but sweaty armpits are a different matter for me. I’ve gone through a number of brands and products ever since I started wearing deodorant-slash-antiperspirant and have always just gone with what’s available and functional.

Then, Avon sent me all ten (10!) varieties of their Feelin Fresh Quelch Deo Cream. It’s been a few months now, and I wanted to have used more than one before starting on my review — but I haven’t even gotten halfway through a 60-gram tube!

So instead, I looked at the similarities and differences among the 10 as well as the ingredient list for a rough idea of what is on offer. Watch below for my vlog review, or scroll down for a written summary.

The Avon Feelin Fresh Quelch Deo Cream is formulated with their 48-hour Dry Pore Technology, which means that your armpits are supposed to stay dry for 48 hours. I never put this to the test, but I noticed that throughout this summer, I didn’t have “baskil” (basang kilikili – wet armpit) which usually plagues me when wearing dark-colored or sleeved clothing.

Feelin Fresh Quelch Deo Cream is alcohol-free and colorant-free, which eliminates two known sources of skin sensitivity. It’s also dermatologist-tested, which means the formula is generally safe for skin and in most cases did not cause skin reactions.

However, if you know you’re sensitive to scents or certain ingredients, you should definitely check the label and ingredient list. While the scents are mild for me, I know some other people cannot tolerate scents at all. And I’ve known since I was a teenager that I’m allergic to tawas (potassium alum), so I’ll steer clear of the Tawas variety of the Quelch Deo Cream.

A few of the Deo Cream variants contain niacinamide, which is Vitamin B3 that helps your skin form a protective lipid barrier to keep it moisturised. One variant contains glutathione, which is an antioxidant widely known for its off-label use for skin “brightening”.

I think the most powerful formulation is the BHA Power Serum variant, which contains a Pore Control complex that reduces hair growth, as well as salicylic acid and witch hazel which help resurface skin.

All Avon products are not tested on animals anywhere in the world, and Avon is a long-time partner for FRAME: Fund to Replace Animals in Medical Experiments.

Avon has a manufacturing facility here in the Philippines, in Calamba, Laguna. So when you purchase this from Avon, you are supporting the employment of Filipinos.

Avon is well-known as a direct selling brand, so if you have an Avon Lady in your life (or neighborhood) you should put your orders in through them. However, Avon has also opened an online shop at avonshop.ph.

For more information about Avon, visit avon.ph. Check out their social media accounts Avon Philippines on Facebook and @avonph on Instagram.

A day away for my birthday 😊

Running is the closest you can get to flying under