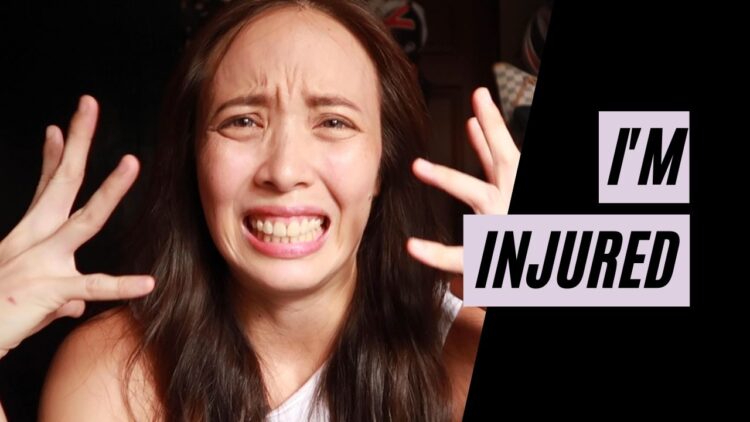 I have some bad news. So you remember that vlog I did maybe two months ago when I said that I’ve never been seriously injured from running and triathlon? Well, famous last words…

I have actually been feeling strange in my right leg since August or maybe even earlier than that, but it all came to a head when I did a high intensity interval workout. My right knee twinged when I did a weighted lunge. I didn’t think anything of it at first because I’ve had minor niggles before, and nothing really serious happened from them.

Then I noticed whenever i would squat down it was really painful coming back up out of that squat. Also while pedaling on my bike on my indoor trainer, I couldn’t tolerate having too much resistance.

I waited a month to see if the pain would go away on its own, but this week I had had enough of this pain in my right knee.

I scheduled a consultation with the great folks at PACE Prehab and Recovery to find out what’s really going on. Being injured enough to need professional help is kind of a new place to be for me. I’m not happy I’m injured, but I do feel positive about the road to recovery because these are really knowledgeable people managing what I need to do. I don’t think they found any sort of tears or mechanical issues; it’s really just soft tissues that are affected.

The knee pain is actually just a symptom of something else that’s going on. The problem is happening higher up the leg somewhere in my hip and in my glute muscles. My glutes aren’t really firing all that efficiently, so other muscles are coming in to kind of take over the functions that the glutes are normally supposed to be doing.

We found some swelling, some irritation which is causing the pain in my knee. But because of that knee pain, I am starting to change the way I move. For instance from the deep squat I was talking about, with this knee pain it’s like I’m shifting my weight towards the other side of my body just to avoid putting any pressure on this right knee. That can cause other problems because I’m favoring one side. It’s a cascade of things I want to avoid, so I’m glad I did the consultation early on.

Aside from frequent checkups and follow-ups going back into the PACE clinic, I also have to do some home workouts once or twice a day to strengthen the glutes and re-train them to fire when they need to. I actually experienced a lot of relief after that one session.

Then I went and did a silly thing because they said that I could run. So I did a run that same afternoon and triggered the pain all over again.

I’m a little frustrated that I might have set myself back by doing the run after the consultation, but I know I can come back from this a stronger and more resilient athlete. At least it happened now, and not during an actual season where I had races and goals planned. This injury might have been a long time coming, but I just didn’t feel any pain and it just surfaced now. I do think that things happen for a reason; the way you can grow is in how you approach and respond to these problems.

Taking you with me on this journey, hopefully it’s all forward progress from here and I don’t do anything stupid to set myself back.