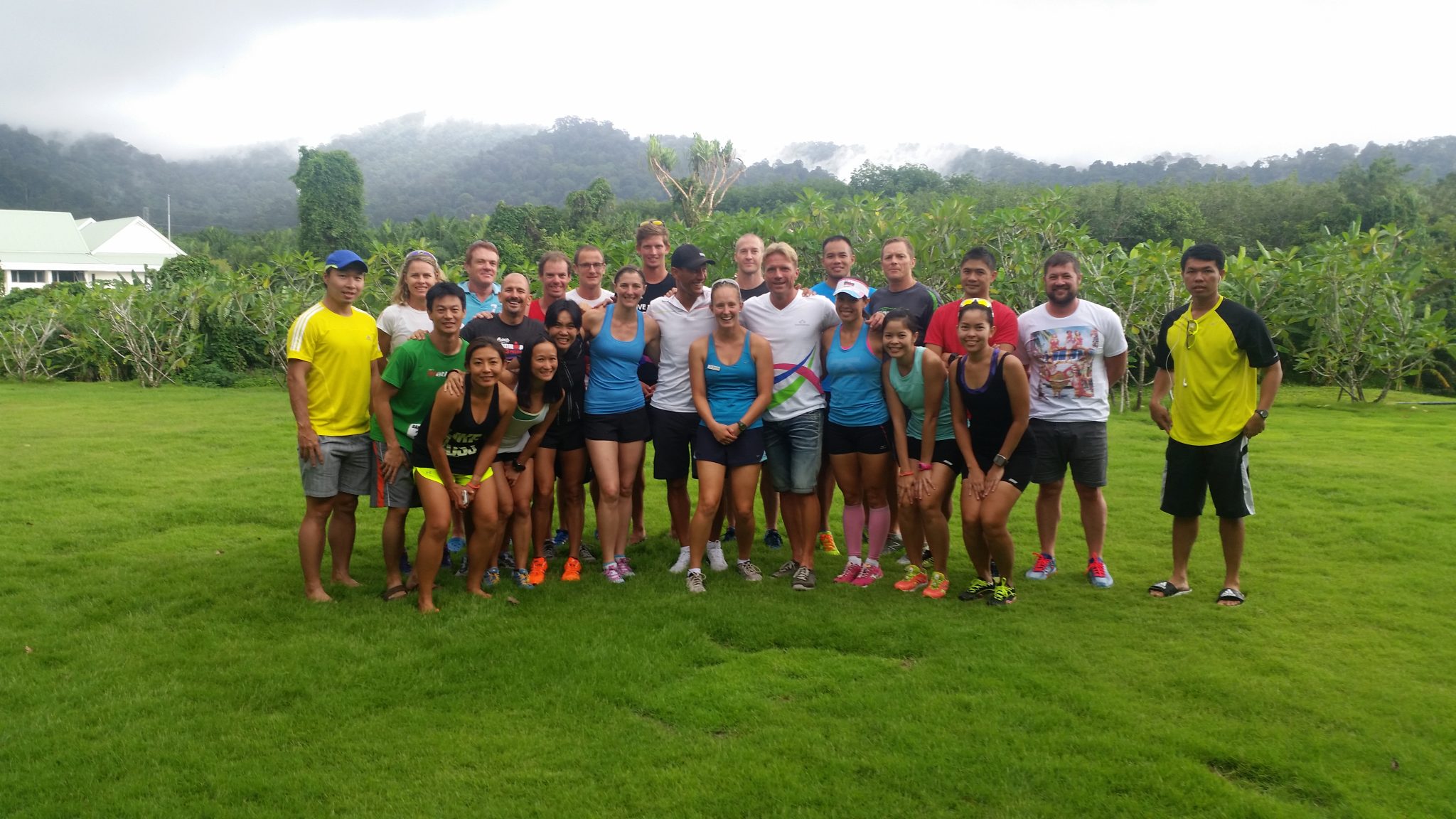 This is part of a series of posts about the Triathlon Supercamp. Check out Supercamp Day 1 & 2, Supercamp Day 5 to 8, and the Supercamp podcast with Caroline Steffen and Macca.

Hello everyone! It’s been four days of our eight-day “Supercamp” triathlon training here at T*** in Phuket, Thailand. It’s been a blast! We’ve had some tough sessions, but also lots of downtime where our bodies are able to recover and absorb the work. Yesterday was quite tough, but today was softer. Check out what’s happened so far. We opened Monday morning with a long swim, but it isn’t like the long swims I do where it’s completely aerobic work, like my weekly 10×200’s. Instead, our main set alternated between aerobic long straight swims and hard 50’s. For us in the first 2 lanes it equaled about 2,400 meters of swimming in total (including warmup and cooldown). Ben Hammond, our camp director, and Jurgen directed the swim session, although Macca was also there for most of it. I started the warm-up in Lane 1 (the slowest lane), but Ben moved me up to Lane 2. It was certainly more my pace, but the recovery times in the fast 50’s weren’t as long as they were in Lane 1 so I started to struggle in the last two rounds. I smacked the wall in frustration after I finished some 50’s, and Macca said, “You gotta want it, Noelle!” I whinged that I didn’t want to be in Lane 2, and Ben replied, “But I want you in Lane 2!” They relented though when they saw that Lane 2 had started the last round without me and two other guys, so we got moved back into Lane 1. Score! I realized that I don’t have that top-end speed to surge forward in a swim because I’d done too much mileage and not enough speedwork. I’ll make a mental note of that for my next training block. After that hard swim we got into our cycling gear for a recovery ride. Rides with Macca are always fun.

There were two options: 60 kilometers with Jurgen and the fast group, or 40 kilometers with Macca and Ben. Naturally I picked the 40-kilometer option, which grouped together the slower cyclists and those who wanted to recover. But because Macca was up front, some people got really motivated to push harder. The recovery ride turned into a threshold ride for some. After being in the front bunch of that for a bit, I slid back into the middle section where the group was breaking apart. I took care of not letting them get too far behind by allowing them to draft behind me so I could pull them back up to the lead group. It was a bit more challenging for my legs, but I was happy to do it because I saw how a number of them were struggling. It was a nice feeling after the ride to get hugs from some campers who appreciated the help.

trying to recover before the next session

I threw some Zensah compression calf sleeves on before we got our run video recording done. Ben had us do a short warm-up before he started filming us with a GoPro on his bike. Our running would be analyzed individually the next day by the three coaches on a big screen in front of all the campers so we could all see how we could stand to improve.

Samnom from Switzerland is caught on cam It was a pretty short session, and we were all encouraged to join the Strides & Drills session led by the fastest Thai duathlete Ricky Phanthip. This wasn’t a camp session but is one of the sessions offered weekly with membership at T*** Sports and Leisure (kind of like group exercise classes at a gym). Ricky was funny yet informative and I kind of regretted not having done the drills and strides before the run videos were taken — I could definitely have run prettier. 😉 At the end of the track session, Ricky handed eggplants (???) over to the fastest male and female runners. These eggplants had previously been used an hour before in a relay for a company’s team-building activities at T***. Tim and Veronica with their prize

I didn’t sleep well, so I knew I was too tired from the previous day’s activities. When Ben offered a 20-kilometer easy ride to precede a quality run off the bike on the track and trail, I immediately latched on. We rolled out at about 26 to 27 kph on average, which allowed those of us who took that ride option to go really hard on our run. Caroline Steffen on the track early in the morning. Macca ran with her.

After that we had a swim video recording done, the thought of which alternately intrigued and horrified me. I’m not the best swimmer, but I’m curious how I look above and below the water and would love to know what I need to do to go faster — is it technique or is it fitness? We also had some fun between takes

After lunch as clouds gathered for rain showers in the afternoon, we sat down at the Booster Bar for the run video analysis. It was just my luck that as my video came on for analysis, Macca got called outside to have an intense talk about business and didn’t return immediately. Jurgen and Ben did a number of analyses before he came back inside. I don’t mean to say that we’re more important than running T***, but most of the people on this camp had booked because they had the impression that Macca would be present. One would think that maybe the guy who called him away could wait a few minutes until after our video analysis session… But maybe it’s best Macca didn’t pick apart my running form. 😛 According to Jurgen, I have a mild heelstrike, pronate on take-off, but my leg turnover is decent. Don’t rain on my parade.

It was a good thing we didn’t have any outdoor sessions planned because it rained really hard in the afternoon. Instead, we had a strength and conditioning session where we learned what muscles needed stretching and what exercises we could do to strengthen our core. This is a core exercise. This is not a core exercise. 😛

It was a productive session where my fitness background came in handy regarding flexibility and core strength, although it did expose how much more I need to work on my core. When I came out of that session, I came across Macca doing a swim session with his old training partner Michael Murphy (a mainstay pro in Philippine races) who had just come back from doing Budapest 70.3, and one of his buddies Nick Gates, a retired professional cyclist-turned-triathlete.

Even though they were at the tail end of their session they still looked pretty serious, so I went ahead and had some cocktails to wind down with Steve, the editor-in-chief of Triathlon 220 Australia, his photographer Lucas, and Aaron and Kaye from T***’s PR arm. Things are tougher as we get into midway through camp and I think I’m just cranky because I’m tired. To remind myself how being here is still awesome and a blessing, I made this short video montage.

I’ll check back in here again in a couple of days. Let me know if you have any questions you’d like to ask Caroline Steffen! I have a chance to record something with her for my podcast.