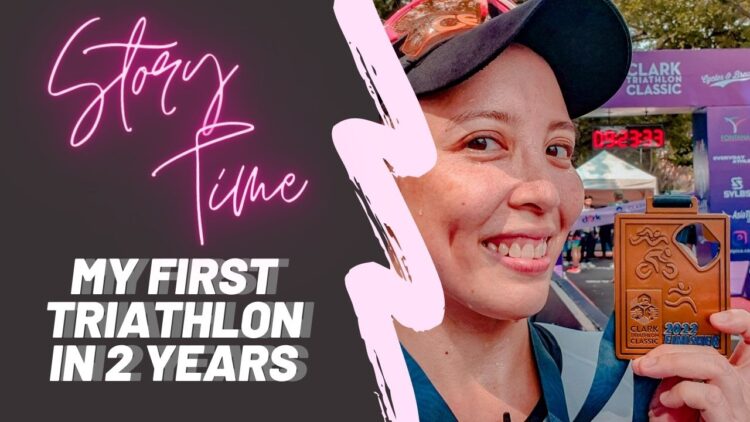 A few months ago I posted a vlog about what you should consider before signing up for a race. That was during a time of greater movement restrictions and regulations around mass participation events.

These days as the COVID-19 situation continues to improve in the Philippines, more races have come back with only a vaccination card as the health protocol prerequisite. So back in March I signed up for the Clark Triathlon Classic organised by GoClark Sports & Events… and then promptly forgot I had a race until the week leading up to the event.

Watch my vlog about the race below, or scroll down to read my takeaways from doing my first race in two years.

I did this race entirely off the base fitness I managed to maintain through the past two years, so I really wasn’t expecting much. But here are some things you’re better off knowing if you’re knocking off the rust from not racing for a long time.

Make sure your equipment is in good shape.

I wasn’t able to give my bike a proper tune-up, but the gears were still shifting smoothly. The issues I needed to solve were my tires’ inner tubes which weren’t holding air properly, my 12-year-old tire pump which wasn’t pumping properly, and my bar tape which was flaking off. So I replaced all of them.

I decided to use my Nike Tempo NEXT% after months of keeping them in storage. They were a pretty good race shoe, but then fell apart afterwards. The outsole flaked, and the upper separated from it. (Serves me right for neglecting them…)

I somehow missed the final race announcements email and the race day schedule in them. All I knew was my rolling gunstart time, so I thought I just could rock up an hour before to set up my transition. Thankfully I was scrolling Facebook on race morning while have breakfast and saw that transition would close at 6am (my initial intended arrival time). After a scramble I made it to the venue with 10 minutes to spare, but that left me with no time to warm up in the pool or to get my head properly in the game.

Usually I have my bike shoes clipped on the bike for a “flying” mount, but given my lack of racing I considered putting my shoes on in transition and just clomping through to the mount line. Thankfully while I was setting up my transition, habit took over and I clipped my shoes onto the pedals. That saved me a lot of time during the race because I just went on automatic after coming out of the swim.

Get through the race one leg at a time.

After 12 years, I still get the race day yips, and this one was made worse because of the morning stress. I had a panic attack in the water, so to survive and avoid being pulled out in the swim (how embarrassing!), I did backstroke for most.

Then for the bike, I sort of knew the course: I would be better served riding steady on the downhill out because I would need to push it on uphill back. I focused on staying hydrated and not spiking efforts because I still had one leg to go.

On the run, I set off at my own pace knowing other people would be ahead of me. But after shaking off the brick-legged feeling, I realised I was steadily making my way forward through the field. Still feeling somewhat good, I put targets on every female’s back I encountered and somehow overtook all of them except for two.

Set reasonable goals based on your current fitness.

I didn’t know how fit everyone else was; I only knew how (un)fit I was. So I think I raced well within myself, did my best, and let the chips fall where they did. “You miss every shot you don’t take” and “You can only race who shows up” — I’m glad I showed up.

After the Clark Triathlon Classic I have a better idea of where my fitness is, and what the way forward is for the rest of the year.