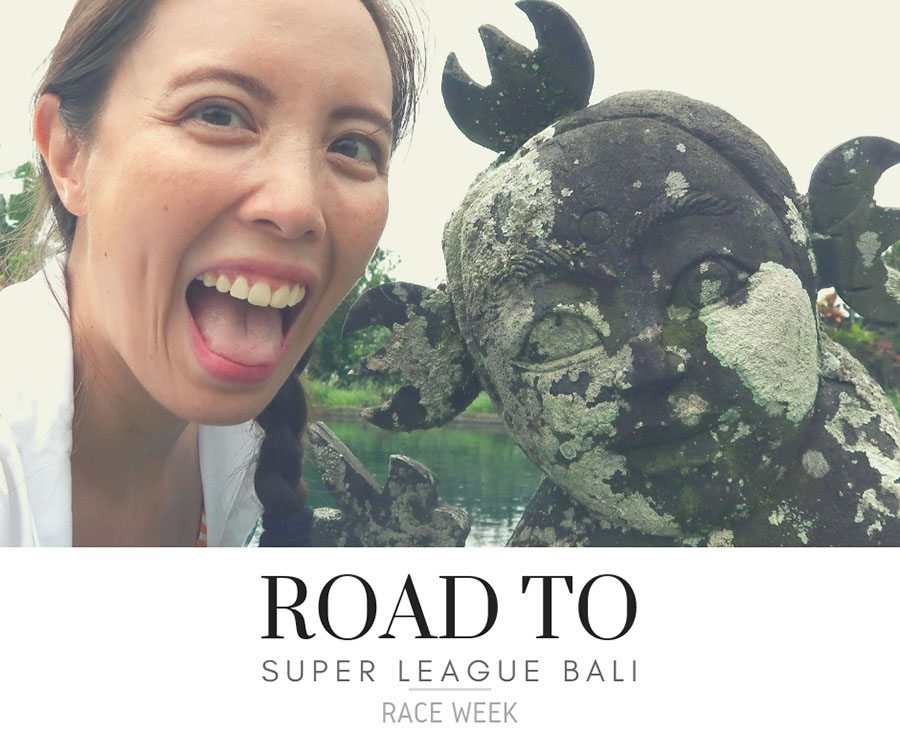 Earlier this morning I attemped to write a blog post, and found out I couldn’t access my website. After trying a few things, I’ve now realized that Kikay Runner is blocked in Indonesia. *insert cry-laughing emoji here* So here I am using a VPN…

I’ve been in Bali since Wednesday morning, but stayed in the Seminyak (Kuta) area for a bit so I could check out the scene over there and also take a day tour. While some people would opt to take their holiday after the race, I wanted to decompress beforehand. I also wanted to see if I could do any surfing while I was there, but changed my mind and decided to take things easy.

No matter how long I sit out in the sun I can't even out the tan lines from swimming in @dolfinswimwearph suits — that's how much I love my Uglies 😆 Just taking some downtime on this side of the island before I head to Nusa Dua where it's heating up for @superleaguetriathlon Bali. If I race right on Sunday, I won't be out there long enough to rack up new tanlines on my arms and thighs 😂

My body was a little weird last week, and for some reason while I was out walking my dog I tripped on air and twisted my ankle. So that really put a kink in my plans to run. Instead, I rode my bike on the run days and kept up the swimming.

For the past few days however, it’s just been walking and sightseeing. The only time I was in water was during yesterday’s tour, where I went to a waterfall and bashed my shin on a submerged rock. (!!!) I’ve still got a few days to rev back up once I’ve rebuilt my bike — I kept it in its box while I was in Seminyak.

It hasn’t been all play, though. I somehow got (willingly) roped into writing a piece for Super League Bali, and it was then I realized what a major undertaking this whole weekend is and will be, and what it means for the endurance community in Indonesia.

An estimated 90% of the total of 2,500 athletes racing across the run race categories, sprint triathlon, and enduro triathlon hail from Indonesia. This also marks Super League Triathlon’s first 10-kilometer run, in a nod toward the huge run culture that’s picking up steam in the nation.

Check out the rest of my Super League Bali Countdown article here.

Right now I’ve checked into the host hotel Ayodya Resort in a different area of Bali called Nusa Dua. The place reminds me a lot of Bintan Island when I was there for the Bintan Triathlon, especially with all the random bike boxes hanging out in the lobby.

Once I’ve built my bike I’ll take it out for a spin and see what the 10-kilometer loop has in store for me. Tomorrow I’ve got a short fun run to participate in, which will also be my first run in more than a week. I’m hoping that despite some stiffness my ankle is no worse for wear, but I’ll do whatever it takes to start and finish my race on Sunday.