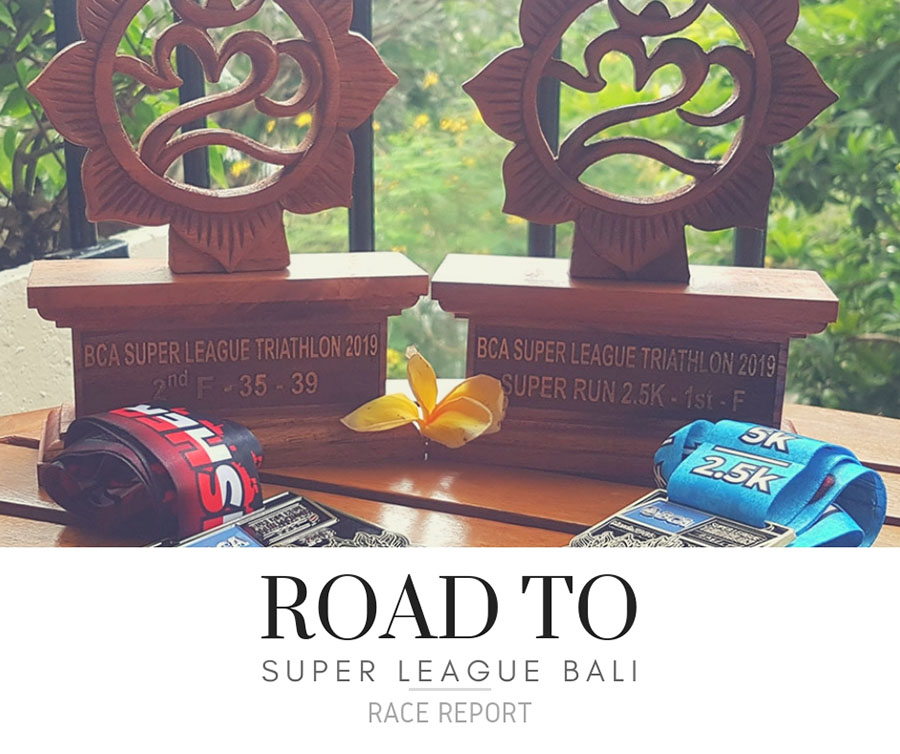 I’ve just realized it’s been a while since I’ve written up a proper race report where there are actual results. I’m happy I’m writing one up for this particular race weekend which I will forever remember…

Even if I were a bit of a proficient age group athlete back at the peak of my powers (LOL), I didn’t know if I still had it in me to turn in a podium performance. After all, I’ve aged up, I’ve had a two-year break, and I hadn’t really tested myself in a while, only to do so at an international race which I paid good money for to travel to. I was risking a lot, and yet it has always been my way to jump in the deep end with both feet. So I did.

My previous blog post was about doing some sightseeing before the race, which helped me get over my travel stress as well as kept my mind off stressing over the race weekend. Here are some pics:

Once I arrived in Ayodya Resort with all the Super League Triathlon branding hung up everywhere, I started feeling those race weekend vibes. It is a familiar feeling full of butterflies in the belly and a sense of impending doom. While I hate that feeling, I also know it keeps me on my toes and I’m thankful for it because it keeps me organized. “Control what you can control, and leave the rest up to God” is the motto.

I’d signed up for the Saturday 2.5-kilometer “Super Run” as a shakeout before my target race, the Enduro triathlon on Sunday. I planned to take things pretty easy at the start and build up to a good pace by the end, and 2.5K is short enough to wake up the muscles but keep me fresh for the next day’s exertions. What I didn’t count on was running through hundreds of local school children. I hate not having clear road ahead of me, so I put on a burst of speed where I saw gaps emerging to get ahead of these packs.

I was running with an MX Endurance member, Kimie, who was one of my relay teammates at Super League Singapore last month. We managed to push and pull each other to keep a consistent 5-minute-per-kilometer pace. We finished not expecting anything, but an official told us to stay close because the awarding would be held in 30 minutes’ time. Apparently we were the first female and second male across the line for the 2.5K category.

And so that’s how I ended up with this awkward photo at the awarding:

Kimie and I then did a test swim out on the actual course. It was here I started to panic about actually finishing the race. Why? Because a strong current flowed from right to left, which meant that if I wanted to swim out towards the first buoy located maybe 100 meters out, I’d have to battle being swept away sideways. Additionally, the initial course design would have us age groupers swimming against that current for the final 100 meters. I tried to do that and for a time it felt like swimming in one of those endless pools — I just wasn’t moving! And on race morning we’d have to do the same thing twice…

So you can imagine my relief when I turned up on race morning, and the race director had changed the course so that we would only have to swim back to any point along the beach after rounding two buoys placed parallel to the shore. (I say “only” with reservations because it’s not as easy as it sounds.)

Up the bike went onto the rack, and I placed two pairs of running shoes alongside it. I figured that with two run legs, I wouldn’t like running in wet shoes the second time around.

We saw the sprint triathlon participants off first, and then an hour later it was our turn.

How do I describe the Enduro? Well, on this course, the first swim was a frantic scramble against a current and crashing into other competitors who had taken a different line to the first buoy. Then when the current had dumped us back onto the beach we ran over loose sand to get into transition and onto our bikes for the first ride. Because it had been a mass start and the ride was draft-legal, I was able to latch onto some strong male riders and “cruise” those 10 kilometers. This made my first run very easy-breezy because my legs were fresh.

That went out the window on the second swim, when the current was even stronger. Aside from pulling sideways, it was also pushing out to sea! I could feel the start of a cramp through my hamstring as I staggered up the beach, and had to walk into transition to calm my racing heart.

The second bike I had to ride by myself as the packs had broken apart. I tried to tag a few that went past me, but I wasn’t traveling at a fast enough pace and didn’t have the explosive power to ride hard for a few seconds before getting on the train. I could feel the fatigue start to seep in. It was on the way to the bike dismount that the fatigue truly set in and I made a few embarrassing mistakes. As I was sliding my feet out of the shoes and kept pedaling, one of my shoes dragged onto the ground and fell off. So I dismounted, pulled off the other shoe, and put them both in my right hand — only to realize I couldn’t grab onto the brakes! I suddenly found some leverage and was able to dismount, albeit with the commentator laughing.

I slid my feet into the second pair of running shoes, promising myself that no matter what I would not stop running until I’d crossed the finish line. Sure, my pace could slide to a slow jog, but I WOULD. NOT. STOP.

And so I crossed the finish line without major incident, called in as “Noelle from the Philippines”. I think I was the only Filipino woman, and there was one Filipino man (Wacky Baniqued) who raced the Enduro. Small victories, I told myself. Besides, I’d come into the race with no expectations because I’d never done anything like it before…

And then they released the results: I’d placed second in my age group!

After racing in the morning I spent the rest of the afternoon pinch-hitting as Super League Triathlon’s writer, running around to vantage points and taking down notes during the pro races so I could write the wrap-ups faster.

It was so awesome to race in the morning and then catch these super talented pros in the afternoon racing to get their Golden Tickets. Bali was an amazing and unique venue and I’m so happy I could tick two things off in one trip: to see Bali, and to race again. It was also really nice to catch up with some friends from MX Endurance and have people to race alongside with!

If a Super League Triathlon pops up near you I would not hesitate to recommend that you travel to watch it. If that particular Super League Triathlon offers an age group race, it should be a no-brainer to go! If you don’t, you’ll really miss out on an awesome triathlon experience both as an athlete and as a fan of the sport.

Well I have to wrap up this article because my flight back to Manila is about to board. Vlog coming very soon. Thanks for reading, and see you on the road!