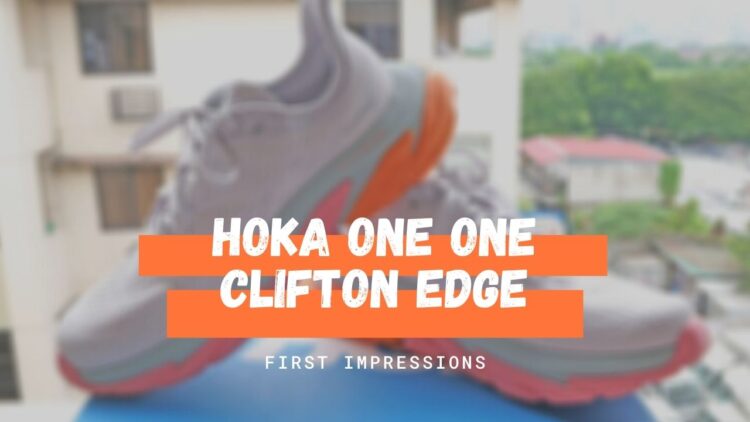 A lot of my triathlete and trail running friends have been raving about Hoka One One shoes for a while now, but I’m not one for bulky-looking shoes so they’ve never been on my radar. But when RUNNR sent me a pair of the newly released Clifton Edge (in hopes of converting me?), I decided to see what the fuss is about. After all, if Ironman world champion Jan Frodeno is wearing Hoka One One then surely there must be some magic in them…

I’m a bit shamefaced to say that I panned Hoka’s earlier release, the TenNine, for having a long giant heel. That’s because the Clifton Edge sports the same feature albeit less exaggerated. The extra heel surface area is meant to provide stability (especially on downhills which are the TenNine’s specialty), and for the Clifton Edge it’s meant to guide heel strikers forward into toe-off instead of putting the brakes on their running motion.

The high stack height (26mm for women, 29mm for men) but small drop (5mm) is a Hoka signature feature. While I’ve been using shoes with about a 10mm drop prior to this testing period, I didn’t feel much difference in how my foot lands or pushes off. According to my reading I should have experienced some Achilles tendon or calf soreness, but I had none of that. About midway through this testing period I’ll do a proper shoe comparison run to understand how different the drop heights are and how this can alter run form.

Despite its bulky look, the Clifton Edge is actually lighter than my previously tested shoe: 7.2oz versus 8.28oz for the Pegasus 37. They also ride very similarly in being a steady-run or long-run style shoe — I find these resist fast pace change.

Check out my vlog below for further first impressions, then check back here in about a month for my full review.