This is one of my favorite times of the year for training and racing. Metro Manila temperature hovers around a low of 25 degrees Celsius and a high of 30 degrees Celsius, so exercising outdoors feels almost like you’ve got a giant air conditioner pointed at you.

It probably explains why I was able to achieve 100% of my planned training hours. Although I still need to get up early to run (and beat the traffic rush hour), I can delay swimming until the afternoon and still enjoy a nice cool pool.

Of course, this cool weather won’t last and I will still need to train through a hot Manila summer. My project for the year is increased run mileage and improved run splits. Since I now have a great appreciation for the structured run sets I can only do on a treadmill, you’ll see me do at least a few of my sessions indoors.

Recovering on the flats after 5 minutes at 3% incline.

Last week I attended the launch of PACE Prehab and Recovery Center. I’ll be writing a bit more about that in another post this week, but I’m just happy that as athletes we have more advanced tools at our disposal. I’ve been at this game long enough to know when to ask for help, and even from this preliminary tour through the facilities I’m already very interested in the advanced gait analysis they offer. I started on this training plan the week after Christmas and it’s set to taper into the National Age Group Triathlon Subic race. Because I won my age group last year at the same race, this year I’ve qualified to race with the elite wave. While that is a huge honor, it doesn’t play into my goals for myself this year.

Racing with the elites means a few changes from my norm. Firstly, we’ll be starting the swim with them. While I may excel in my age group I am under no delusions that I am even on the same level as they are especially during the swim leg.

Secondly, I’ll also need a draft-legal road bike with drop bars because my tri bike isn’t legal for ITU-style competition due to its triathlon cockpit front end. While I could try to borrow a roadie (if I don’t want to buy one just for this one race), many of us age group triathletes invest big sums of money to race on our preferred bike and set-up. We’re also ill-equipped with the skills needed to draft safely — if we even have the strength to bridge the gap from the swim, that is.

Lastly, we will be ranked overall rather than in our respective age groups. This whole process is meant to make talent rise to the top and provide even higher levels of competition for the top age groupers, but I’m not feeling the need to do that to myself especially this early in the year.

I guess I should be thankful that age group women were invited to compete in the elite wave at the NAGT. You’ll have to pardon me because I’m about to go into a rant at this point.

At the ITU Subic Bay International Triathlon this coming April, a new category has been created, called Age Group Select. According to the information given, it’s only open to male age groupers who have registered a time of 2:27 or faster in a standard-distance triathlon. 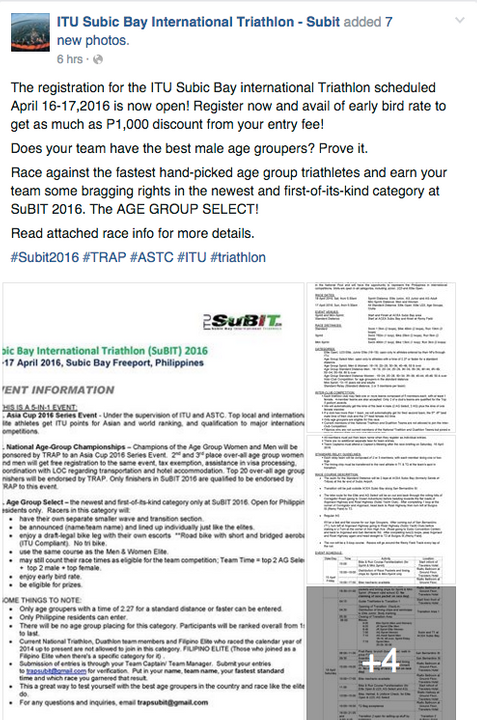 I understand if they want to limit this category to only the fastest age groupers, but why limit it to only male athletes? Maybe there are very few female age groupers who can lay claim to a 2:27 or faster standard distance finish, but that does not mean you bar all females off the bat from entering this category.

This is especially baffling because the ITU is held up as a shining example of equality in sport. Where Ironman has failed in providing equal opportunity for female pro athletes to qualify for its world championship, the ITU has always provided for equal spots for both male and female elite athletes at its races.

Given that I’m already boycotting Ironman events for gender inequality, I’m now on the fence about registering for SuBIT. And because I’m still undecided about joining the NAGT elite wave, I am probably doing all this training without any target race in the near future. 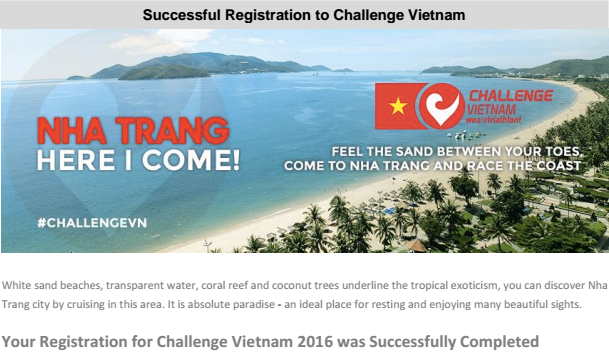 One of my New Year’s Resolutions was to focus on only a few big races so I can properly train and peak for them. Last year was a bit of a crapshoot with three half-ironmans and I wasn’t very happy with my performance at any of them.

I use sport as an excuse to travel and I’ve never been to Vietnam, so the inaugural Challenge Vietnam on September 11 is perfect. I plan on writing a few more posts about that race and my preparation for it, and I hope you can consider putting it on your race calendar as well. It would be fun to have some company. 🙂