The past week has been great for me at the heat acclimation camp. With new friends made, old friendships strengthened, and a new understanding of where triathlon fits into my life, I can say I’ve come out of this a healthier and happier person. 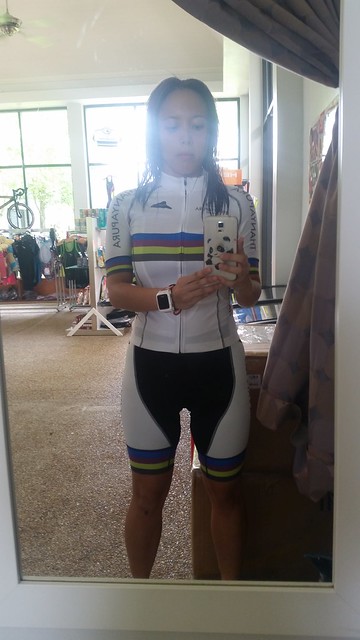 I bought a new cycling kit, too!

As a bonus, I shed a kilogram of weight, which I find is surprisingly hard to do with the good food and ample portions at DiVine Restaurant.

Like at the previous camp, the fatigue had really built up over the week. By Friday I was just about ready for it to be over. We still had three days of sessions to go through, though, so there was nothing else to do but get in the water for the usual Friday triathlon group swim. We used fins for a majority of it which gave me a feeling of success leading my lane (albeit the slowest lane still!). In the afternoon we had a long run scheduled, but two of my camp mates had scheduled a lactate threshold test to find out their zones for running. Me being the inquisitive one, I braved the rains that had suddenly descended on the facilities to check out what they were doing.

This test involved running on a treadmill while monitoring heart rate and perceived effort, periodically stopping to take blood samples. 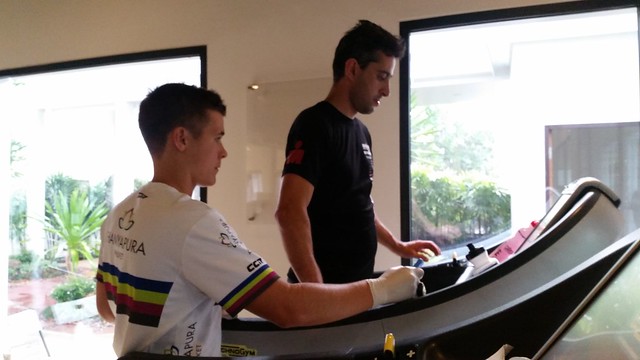 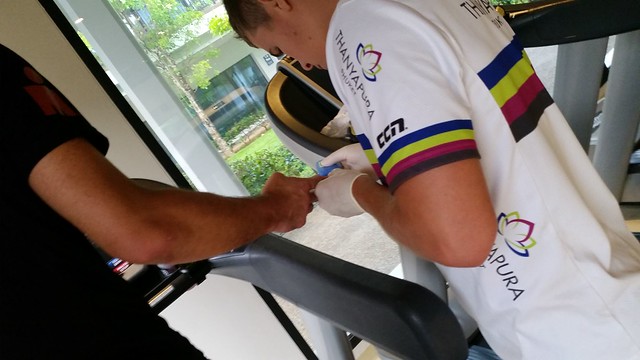 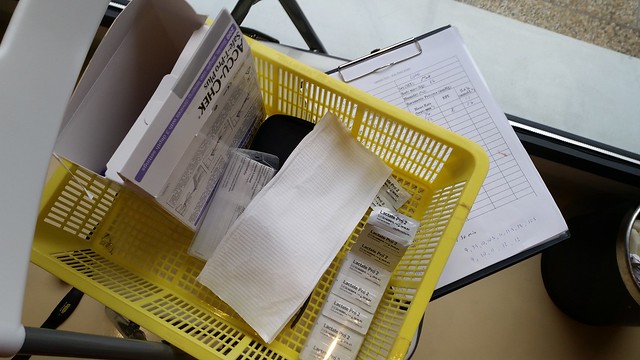 When you know where your lactate threshold lies and what your training zones are, you can train more efficiently to improve aerobic capacity and endurance as well as top-end speed, instead of just trying to go fast or far with no specific heart rate numbers to target.

That afternoon I planned to run an easy 8 kilometers since I felt quite good running off the bike the previous day. I suppose since T*** is set against the foot of the Sirinat National Park with plenty of forest cover, there’s that much more moisture in the air. While it’s not much hotter here in Phuket than it is in Manila, the higher humidity makes the air thick and heavy, and sweat doesn’t evaporate as fast. It’s a good challenge for my body though; after a period of difficulty where the heart rate is elevated, the body is supposed to start adapting to the heat and will show a decreased heart rate after three or four days. Other heat adaptations include increased blood plasma volume which provides more blood to circulate to the skin and regulate temperature, earlier onset of sweating during exercise, and lower excretion of sodium in sweat.

Unfortunately, my Kryptonite (mud and puddles) was very evident on the four-kilometer loop we use, since it runs through an unpaved path that turns to mud after heavy downpours. With even more humidity in the air, soaked shoes, and a blister that opened up after trying to keep up with a fast-paced group, I called it quits after one loop. With time trial efforts on the bike on Saturday and a long ride on Sunday, there would be plenty of exercise to go and I didn’t feel too guilty about cutting the session short. 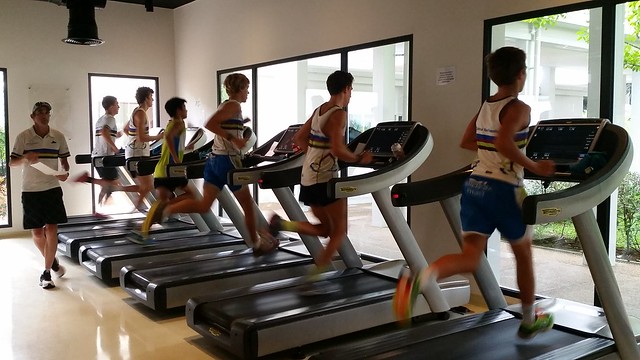 I don’t think I’ve mentioned it in the previous posts, but there were three Filipinos training at T*** when I arrived. August Benedicto, one of the top Filipino elites, had been in Phuket for nearly two months when I happened on him in the triathlon sessions. He returned to the Philippines on Friday evening after completing a good build for Challenge Camsur.

The other two Filipinos are juniors Bambam Manglicmot and JB Sarmiento, who already show promising results in our local triathlons. They’ve both tried out for scholarships for the Elite Junior Sports Academy boarding school here. If admitted this will be a great opportunity for them to receive an excellent education as well as mix it up with some of the best athletes residing in the region, including Macca who conducted their tryouts himself.

I want to shout out to their parents as well for actively encouraging the talents their children possess, and instilling in them the value of going after their dream. 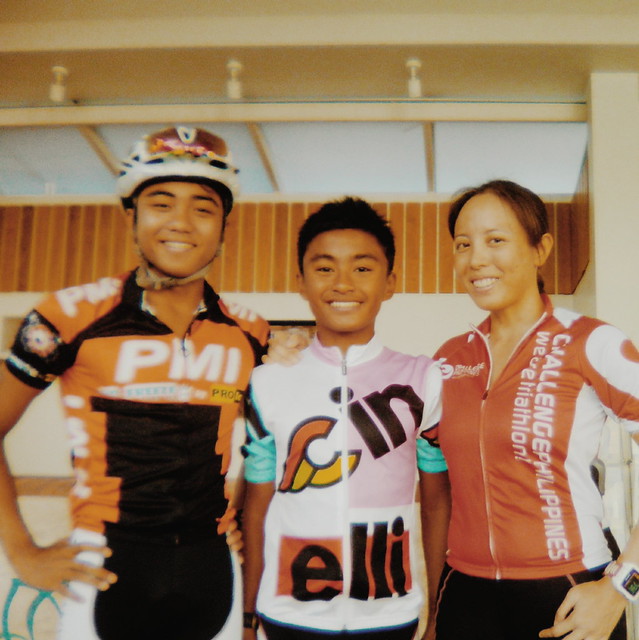 The future of Philippine triathlon is in supporting kids!

I was extremely paranoid about getting a flat tire on the Sunday long ride, after my aborted session the week before. “Please God just let me get this ride in!” I prayed as I rocked up in my snazzy new cycling kit. While this was supposed to be an “easy” ride, anyone who’s ever joined it knows the pace up front can get quite fast for an average age grouper like me, especially with my bike handling skills. I did manage to stay with the lead group for most of the ride out to Phang Nga and the U-turn at the Home & Life Bakery; I felt some resistance on my rear tire and realized former Tour de France cyclist Nick Gates had grabbed my rear wheel with his hands. 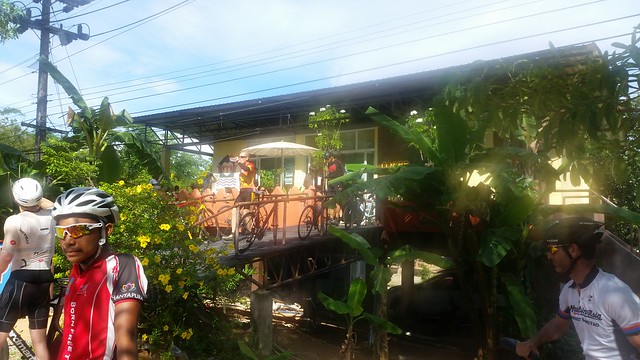 I made it to the bakery! 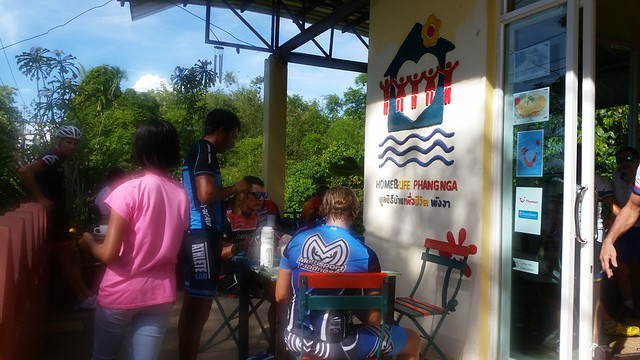 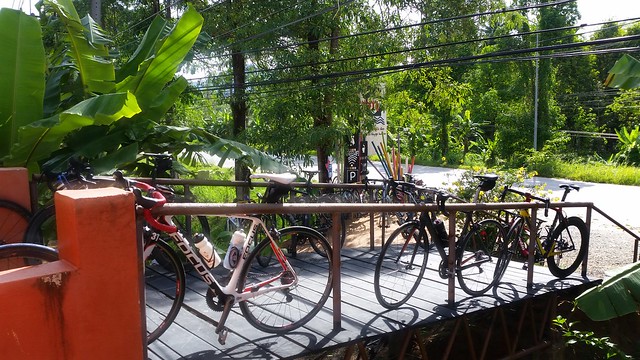 Maybe about 30 percent of the group split off to do an even longer ride, while I rode back at a more leisurely pace with some of the friends I’d made in previous triathlon group sessions.

As I rode into the T*** parking lot, I felt a strange but familiar sensation in my rear wheel. It was flat again! Just in the nick of time, and I guess that was my sign to end further training activities for the rest of my stay here.

I checked out of the Sports Hotel, got in my rental car, and drove down to the south of Phuket to Chalong to visit Wat Chalong (Chalong Temple) and the Big Buddha, and then to Rawai to see Laem Phrom Thep (Promthep Cape). 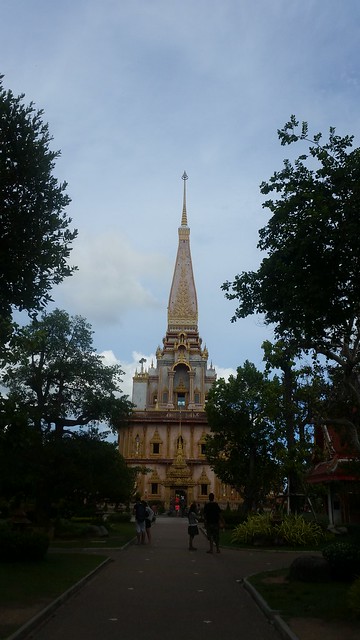 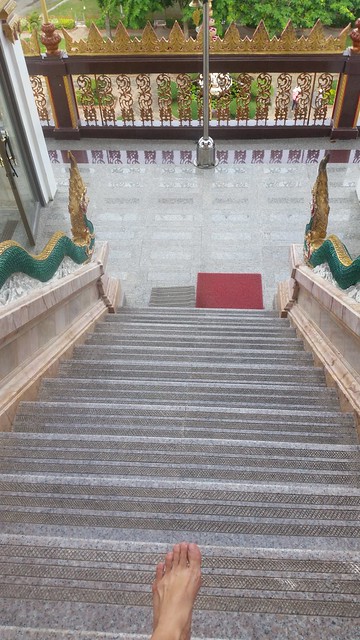 It was a long and steep drive up to the Big Buddha in the hills overlooking Phuket, but it was definitely worth it. It’s a pretty ambitious project to build one of the largest Buddha statues, but it’s getting done thanks to the devotion displayed by many I saw there, and donations from tourist dollars. 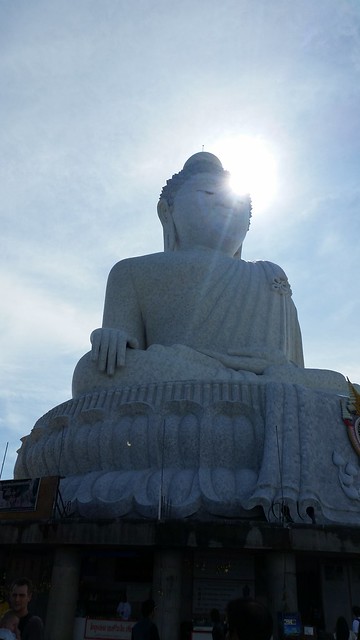 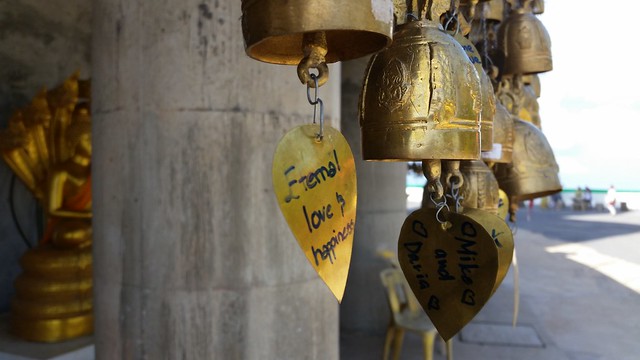 For a donation to the building project, you can hang these bells around the base of the Buddha and write your wishes or greetings on them. 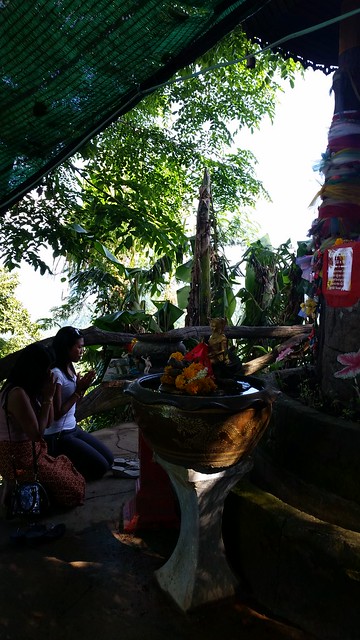 The drive southbound to Promthep Cape wasn’t too long from Chalong, but it involves taking a right turn at a spot where the road says “Dead End”. It kind of felt like I was getting close to the edge of the world I knew, and that the seas fell downward beyond the horizon. 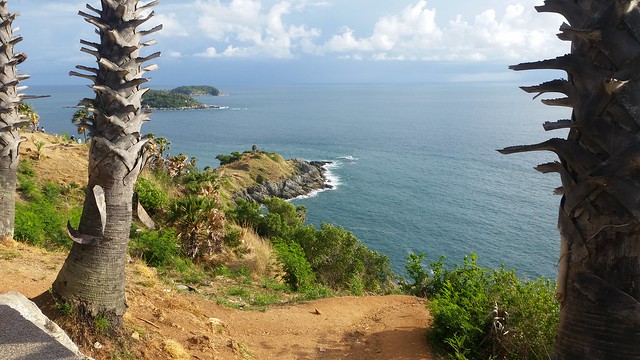 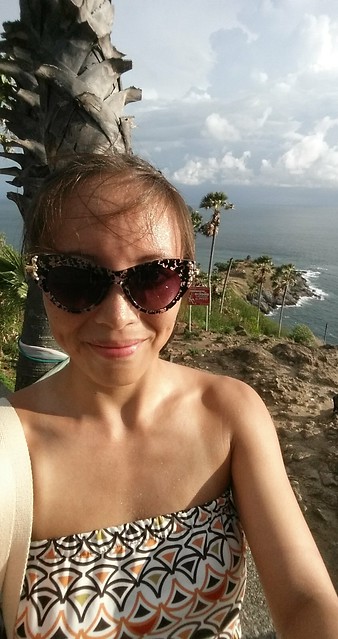 A selfie to show I was actually there! 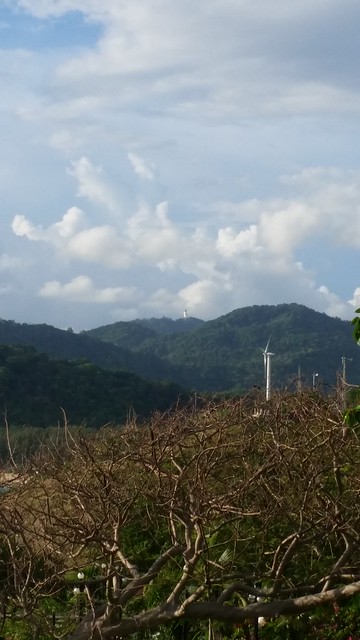 You can spot the Big Buddha from here.

I’m taking the rest of today, Monday, off to recover. Maybe I can get to a beach this afternoon, because the weather is starting to look great after this morning’s thunderstorms. Tomorrow, I head to Phang Nga Bay to do some kayaking and island-hopping, and then it’s goodbye Phuket, hello again Manila on Wednesday.

I’ve definitely had my fill of training and triathlon during my stay here, and it’ll be good to be back home. But I can feel my fitness has definitely improved, and I’m more hopeful now for a good race in Challenge Camsur than I was two weeks ago.

Tweets by KikayRunner
If you keep your eyes open, you can still find won