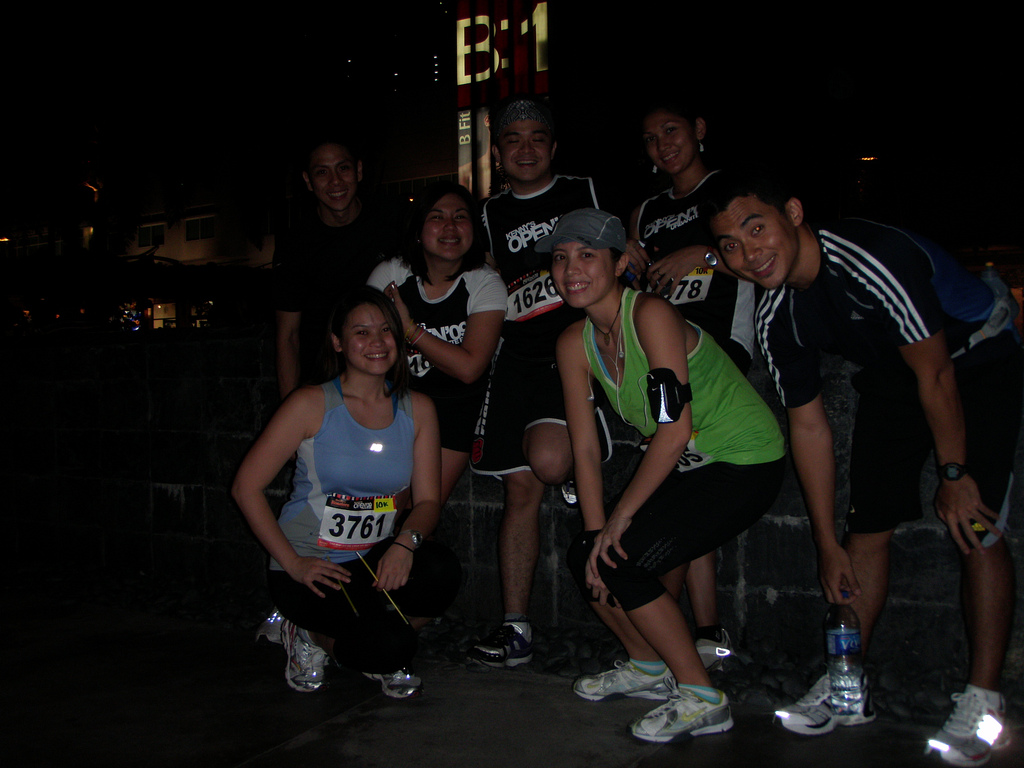 Whenever I meet new people and they find out I run and do triathlons, they end up asking how I got into it all. I used to think it wasn’t an extraordinary thing to want to run for an hour or more, or swim laps in a pool, or ride a bike fast. How naive of me! So how did I get into all this craziness?

I’ve thought about this very carefully, and I can trace it to the influence of one person.

(No, it’s not Piolo, but I think this person can hold his own against Piolo’s good looks.)

Joel Ramos, this is all your fault.

Joel’s the guy on the right. We look so young and chubby!

I always say that I started joining races in July 2009, but had been running off and on even before then on gym treadmills and around my alma mater’s campus. I never thought I was fast, though, until one fateful December night in 2008.

It being the holiday season then, I felt pudgy and wanted a good workout. Joel and a group of people from church who called themselves the Samahan ng Midnight Runners had a regular late-night run session around the UP Academic Oval. I got myself invited along and dutifully laced up my barely-used running shoes (which had only previously been worn inside the gym).

Joel put on his earphones and said he was going to jog at a slow pace. I paced beside him for about half the circumference of the Oval (so maybe just a little over a kilometer). I got bored though; I was used to heart-pounding, sweat-dripping treadmill sessions so I said I was going to try running a little faster…

I ended up doing two or three rounds of the Oval at that pace — I didn’t have a GPS watch then, so I don’t know exactly how fast I went — and enjoyed myself immensely. Shortly thereafter, the story of that night spread among the Midnight Runners; according to Joel he felt so challenged by the speed I’d displayed that he resolved to get faster. (And he did!)

You know how in the film Inception, the process of inception works by planting the simplest form of an idea deep enough in a person’s psyche, and then that idea grows until it defines the person? Joel planted the tiniest idea in my head back then that I was a runner, and a fast one at that.

So I started joining races in 2009. In 2010 after Joel paced me on the last few kilometers of my first half-marathon at Condura, he introduced the idea of doing a marathon. He had observed the people crossing the marathon finish line and said to me, “You know sis, we’re fitter than some of the people crossing. We can definitely finish a marathon!”

And then I found myself running two marathons that year while Joel went on to pursue triathlon as a co-founder of Team Endure.

After I did my first marathon, I was tired of running. Here entered Joel yet again with these words: “Sis, come swim with us. It’s good cross-training!” And then when I finally turned up at the pool, he told me, “You can swim, you just need to learn how to pace yourself.” Before I knew it I was signed up for the Speedo NAGT minisprint triathlon in Ayala Alabang. Now here we are, three years hence, and I’m on the cusp of doing my first half-Ironman. I started believing I could do the whole thing when I saw Joel finish at last year’s Ironman 70.3 Philippines.

Thanks, bro. See you this weekend. You’d better take some amazing photos!

9 thoughts on “The Secret Origin of Kikay Runner”