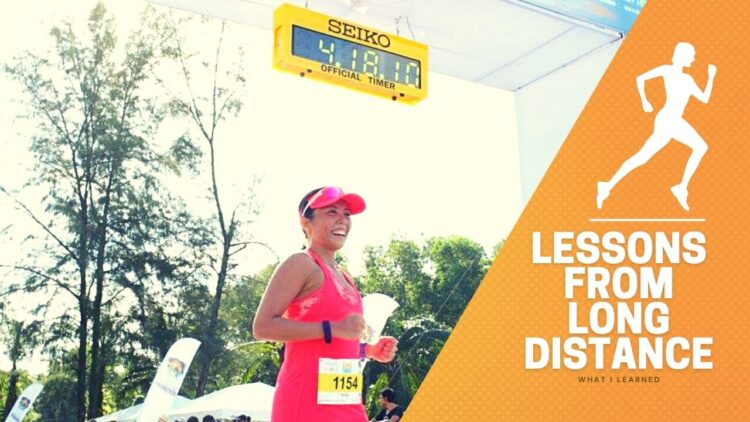 Last weekend we saw the return of marathons to the Philippines through the Asics Rock ‘n’ Roll Manila Marathon. I’m so happy that mass participation events are back on the calendar, and I’m certainly feeling a bit of FOMO from not having registered for any of the distances available.

This year marks my 13th year of running, and my 12th year doing triathlon. Having done endurance sport for more than a decade now, I’ve also done the distances which people believe are the respective pinnacles for these sports: for running it’s the marathon, and for triathlon it’s ironman.

I think as a runner and as a triathlete you learn a lot about yourself and a lot about your capabilities when you do these banner distances. I know some people are happy doing 5K and 10K; for triathletes I have a friend who has no intention whatsoever of doing an ironman (or so he says). That is completely fine, and a respectable choice considering these long distances take a lot out of you in terms of time and resources and commitment and desire to do them.

You need to enjoy the training in the moment, because you won’t remember much of it after.

A friend once asked me after I did my ironman, “So what have you been doing for the past few months? What do you do on weekends?” And I realized I didn’t remember any of them because they were spent doing long rides and runs where nothing eventful really happened.

When you’re actually doing these sessions, you’re not always thinking about the race you’re training for. You’re just trying to get through these sessions one at a time. But it’s important to enjoy the sessions in the moment because that helps them get done and that helps you stay consistent. Whether it’s trying to do these sessions more often with friends, or listening to some great music while you’re doing them, going to training venues which rev you up to want to keep training.

You don’t need motivation to get through the training and the racing. You need patience and persistence.

Motivation is an emotion, and like all emotions it ebbs and flows. You don’t necessarily have to be motivated to get through any sessions or to get through your race.

Long distance teaches you that consistency is more important than feeling motivated. You don’t wake up every morning wanting to swim, bike, and run — but you can wake up wanting to check the training sessions off. Then training becomes a habit, part of your lifestyle, easier to get through. When you put enough of these sessions together, you create that firm foundation upon which you can race.

Non-reliance on motivation helps you persist whether in training or in racing despite what you’re feeling. In my second marathon (the 2010 Milo Marathon finals), at the second kilometer I started asking myself why am I doing this? Why am I even here? What benefit is it to me to run this race at this pace? But I just kept putting one foot in from the other and before I knew it, I was at kilometer 15 feeling a bit better about running.

“Highway hypnosis” is real, but dissociating can help you finish a race.

If you’ve trained properly, your body can actually go on autopilot for long stretches, and even if you want to quit you’re probably not going to.

During my one and only full distance triathlon race at Challenge Roth on the marathon, I had been in a crash on the bike. So I was just trying to get through the marathon. But at one point at kilometer 17, I wanted to quit. Luckily the design of the race at that time was full of out-and-back stretches where ambulances couldn’t get through the footpaths. So if I quit out there, I would still have to walk myself back to the finish area. I kept postponing quitting until the next aid station, and the next, and the next, and suddenly I was only seven kilometers from the finish. So that’s how I tricked myself into finishing.

You can endure more than you thought you could at the beginning of your journey.

Before you signed up for it, you weren’t capable of doing those distances. Then you started training properly, you got yourself to the starting line healthy, and then you got yourself across the finish line in one piece. You realize you’ve done something you couldn’t have six months ago. I’m not just talking about race day endurance; I’m talking about the training you did leading into race day — who knew you could sacrifice so much?

It’s not so much character-building, although sometimes people become better versions of themselves after doing these long-distance races. But it’s more of character-revealing: you reveal who you are in the way you approach and finish a long distance race.

You should just race your own race.

This is not for people who are in this competitively to win. If you’re just there to finish, if you’re there to beat your own personal record or to achieve something for yourself, then you need to race your own race. Many times you’ll see someone going faster than you at the start, but then you can reel them back in by the finish line, if you race within yourself. You know what you’re capable of physically, mentally, and emotionally; you were the one who created your game plan for the race, so to perform at your best you really need to follow that regardless of what everyone else is doing.

Mistakes can add up, but you also can come back from them.

If you make a mistake in a short distance race with nutrition or with pacing, the race is over before you even realize that you’ve made a mistake or you’re towards the finish line so it doesn’t really matter. But during a long distance race, all your mistakes have a cascading effect that can affect the end of that race.

But paradoxically, a long distance race gives you some leeway to come back from those mistakes if you catch them early enough. You can slow down, take on some nutrition, and allow your body to recover so you can make that final push toward the finish line.

I guess what I’m trying to say is that I learned a lot of life lessons from long distance racing which I might not necessarily have learned just doing 5Ks and 10Ks. Aside from the health benefits and the achievement benefits of doing long distance racing, I highly encourage you that if you have the desire to do a marathon or to do an ironman, go for it. Plan for it, train for it, commit to it — and you will reap so many benefits not just physically but also mentally. It nourishes your soul in ways that I’ve never felt from other things that I’ve done in my life.