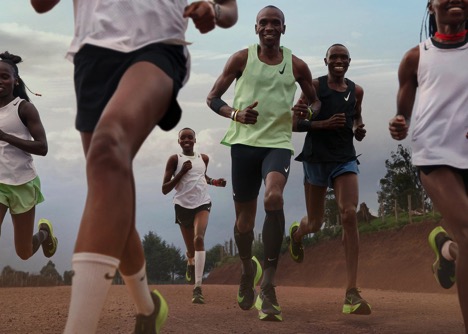 When I watched Eliud Kipchoge’s INEOS 1:59 attempt at going under the two-hour mark for the marathon, I marveled at the shoe he was wearing. With its thick sole, it defied my preconceptions of what a racing shoe looks like. That shoe turned out to be the prototype for the Nike Air Zoom Alphafly NEXT% which went to market on June 2 for Nike Plus members and July 2 for the general public.

Now, Nike has completed its Zoom lineup with the Nike Air Zoom Tempo NEXT% alongside the Alphafly, Zoom Fly 3, and Pegasus 37 (previously reviewed here). These are the latest Nike Air Zoom models that will suit runners across the ability and fitness spectrum.

Last week, Nike invited running bloggers and shoe fans to a virtual presser about the “Nike Zoom family” with a focus on the NEXT% platform. Their EKIN (brand evangelist) Zaini Mohamed Sani took us through how the NEXT% platform evolved and what to look out for.

Much of the development of the NEXT% was based from runner feedback out of Kipchoge’s training camp in Kenya. According to EKIN Sani, they found that more cushion equaled more benefit, even in racing shoes. This runs counter to conventional wisdom which says “train heavy, race light” — but then again, Nike’s cushioning material especially with ZoomX and React are very lightweight, no longer the clunky foam chunks of yesteryear.

Anyway, here’s what to expect from the Alphafly NEXT% and the Tempo NEXT%. 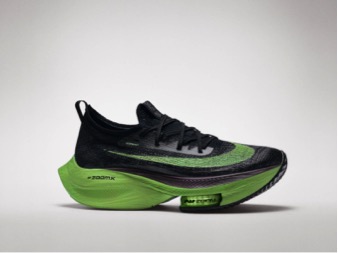 The Alphafly is meant to be the “pinnacle of expression” to help athletes break barriers and reach new levels of potential. Inspired by the various iterations of the Vaporfly series, the Alphafly features some of the same concepts taken to another level.

For instance, the upper material called AtomKnit is based on combining the best aspects of Flyknit and Vaporweave. Vaporweave is very lightweight but structured so it can hold a foot down, and it does not retain water. Flyknit is light and breathable but can stretch a lot. AtomKnit maximises ventilation with no sweat absorption and has a contoured fit with less stretch and more support.

The midsole is a combination of ZoomX (Nike’s lightest and softest midsole material that provides the most energy return), two Zoom Air units (instead of the usual one unit), and a full-length carbon fiber plate to keep the system stable as well as provide propulsive sensation (it’s a literal spring).

The outsole is rubber with different angles of traction. The Alphafly’s forefoot has light and soft blown rubber, while the heel has traditional rubber for durability, unlike the Vaporfly NEXT% that offered up midsole material in the heel area.

Still, the Alphafly is meant for the rigors of one-day racing, not so much to run your everyday miles in. As many who have bought the Vaporfly 4% and NEXT% have told me, for their high price point they don’t last very long if you also train in them.

That’s where the Tempo NEXT% comes in. 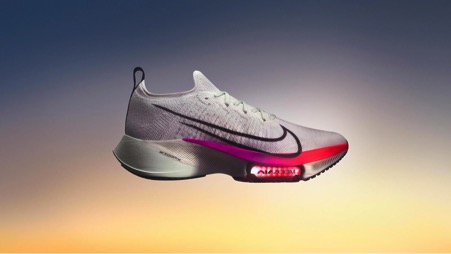 The Tempo NEXT% is Nike’s fastest trainer shoe, meant to bridge the gap between training and racing. It has the same feel as the NEXT% so the transition from base training miles to race pace doesn’t feel as jarring (versus coming from the Pegasus, for instance, which has no Flyplate). However, Nike wanted to give this training shoe more softness and comfort rather than the rigidity of a racer so you could log plenty of tempo miles on it without beating up your body. So, the Tempo NEXT% uses the same two Zoom Air units as in the Alphafly NEXT%, but instead of a carbon fiber plate it has a composite plate made of nylon, like that used in the first Zoom Fly. It also has React foam in the heel. It uses Flyknit in the upper, and its heel design allows for easy entry but also a very locked-down feel once your foot is in there.

The outsole takes learnings from the Kenyan wear testers. While they usually run on packed dirt roads, with the modernisation in Kenya these roads are starting to be replaced by pavement, which tears up less hardy outsoles. So the outsole is more durable, but retains the feel of running on packed dirt.

The way Nike explains it, using shoes within the Nike Zoom family means you start off logging base miles in the Pegasus, then go for faster runs or even race in the Zoom Fly. If you’re looking for that extra edge, you can start sharpening up by using the Tempo NEXT% before breaking out the Alphafly NEXT% for your race.

I think the Alphafly is a bit hyperpowered for a runner like myself, but it will be interesting to run in the Tempo soon.

The Nike Air Zoom Tempo NEXT% retails for P10,195 and will be available in select Nike Park stores on September 15.