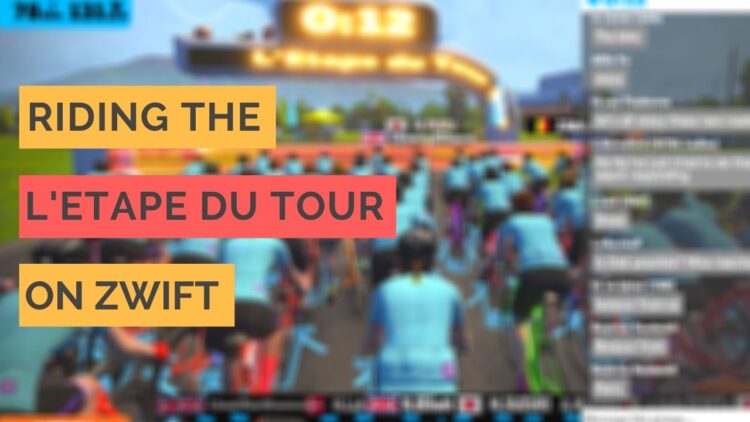 I don’t know when I became a sucker for virtual jerseys, but I just love “dressing up” my avatar on Zwift. So when Zwift announced their Virtual L’Etape du Tour de France event series and said I could earn a jersey by doing just one of their three planned stage rides, I was IN.

Zwift built new France and Paris maps specifically for the Virtual Tour de France, in which the world’s top professional cycling teams are competing all throughout the weekends of July. But these routes and maps can also be accessed through the numerous events held throughout the week. Hopefully they can remain accessible beyond July as part of Zwift’s rotating worlds.

This weekend, Stage 2 of the L’Etape du Tour takes riders on two loops of Casse Pattes route. It starts out flat, has a climb up around an aqueduct in the middle, and finishes up a long hill. Check it out in my vlog below:

It’s really quite annoying that I had a Watopia directional marker frozen on my screen throughout the 40+ kilometer ride, but otherwise I really enjoyed the event — the sights and sounds which transported me to the French countryside (and those cobblestones!), the cyclists of various abilities who participated in this which made for some great ride dynamics, and of course the two carrots of Sprint segment and QOM segment to make you put out that extra finishing effort.

One word of warning: you won’t be able to take things easy despite your best intentions. I was just going to make this a long easy ride, but there’s something about trying to stay in a group or bridge up to the next one that really got me grinding the gears. Also, you tend to finish faster, and indoor rides tend to make my bits sore where outdoor rides don’t.