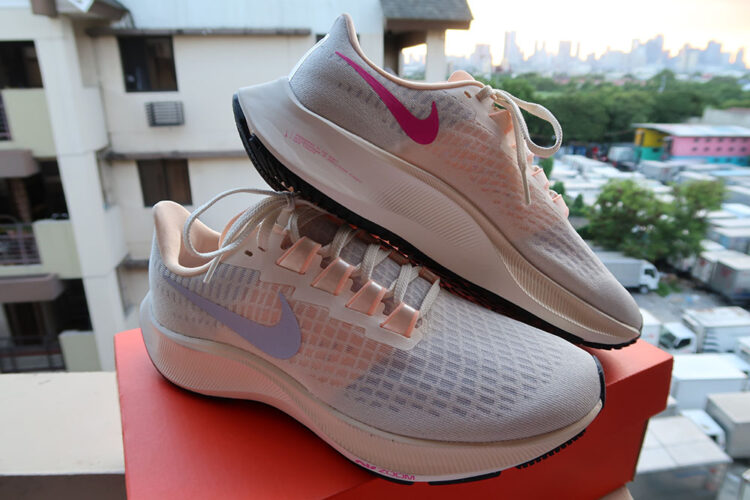 The Nike Air Zoom Pegasus 37 arrived in Philippine stores last June 27, so your truly has had the shoe for about a week now. I’ve started to form my own opinions about how this shoe runs, but first let me give you the rundown on the changes between the Pegasus 37 and previous models.

Introduced in 1983 as “the shoe for every runner,” the Nike Pegasus has earned a reputation in the running community as a trusted, dependable training shoe. The Pegasus has undergone major technology shifts — though incrementally — while gracing the feet of both recreational and elite runners. That small detail is its magic: The Pegasus’ evolution has been made step by step through each model, leaving runners with a shoe that they know intimately well, a relationship that continues with the new Nike Air Zoom Pegasus 37.

One runner who has a special relationship with the Pegasus is Joan Benoit Samuelson, who made a last-minute swap to run in the shoe in 2008 for a pivotal race in Boston. She had regularly worn the Pegasus for more than 30 years (before that, she trained in now-classic silhouettes such as the Daybreak, Odyssey and Althea). But the switch into the Pegasus for the race was all the proof she needed to rely on the silhouette’s fit, responsive ride, lightweight feel and durability when she needed to rise to the occasion.

Thinking back to the earliest Pegasus models, Samuelson is reminded of the value in the line’s iterative progress.

“The innovation, the design and the function of the Pegasus have come so far, but in thoughtful and calculated steps,” she says. “You want to evolve that way if you want to keep the devoted, knowledgeable runner. Throughout my career, when I wasn’t sure whether I was able to go the distance, the Pegasus was my go-to shoe.”

The Pegasus has amassed a huge and faithful following over 37 years, so changes had to be made very slowly to accommodate diehards and every kind of runner. Hence we see the introduction of Nike React foam for the midsole only now (replacing Cushlon), despite it having been in Nike’s arsenal for the past three years. The new Pegasus also does away with Flywire construction, instead using a midfoot fit band to secure the foot. The Air Zoom unit placement has also changed, from full-length to forefoot; they’ve also taken gender preferences into account here, making the unit in the women’s pairs softer than in the men’s pairs (apparently women like it softer across the board?).

There are some things that have remained the same, though. The “elf” heel collar still flicks away from the Achilles tendon, while the waffle outsole remains largely the same to provide trusted traction and durability.

And now, some photos of the Nike Air Zoom Pegasus 37 before I sullied the soles by running outdoors in them 😛

Let’s get my biggest complaint out of the way: due to the change in the Pegasus 37’s lacing system, there is some heel slippage going on. But lacing up tighter doesn’t remedy it; I don’t have a high arch, but the top of my ankle felt strangled no matter how I laced up. Tying the laces one row lower helps free up the strangling sensation, but then makes the heel slipping worse. I’m not sure how to resolve this, but I’ll try using bungee laces to see if their elasticity will improve comfort.

The Peg 37 is higher in profile than the Peg 35 thanks to the thick React midsole. There isn’t any lateral instability which you would expect from a thicker sole, but the ground feel is more muted. I definitely felt the Air Zoom unit under the ball of my foot, and it was weird at first — it almost felt like I had heels on the front of the shoe. I think this could provide a lot of comfort during longer runs, though.

There’s definitely a big change in feel between 35 and 37, but I’m willing to give it some time before I create my full review on them. My friend, Nike sneakerhead and Boston marathon finisher Jael Wenceslao, says it would take a good 50 kilometers to break in the Peg 37.

Given how short my runs have been lately — no thanks to needing to wear a mask outdoors — I realize it’s going to take a while before these shoes start to feel like they should. And then I recall that there was a huge difference in feel between when I first used the Peg 35 and when I’d broken them in and used them for triathlons. (I did eventually end up using the Peg 35 at last year’s Singapore Marathon 21K; that was their last hurrah.)

I also need to run in the Pegasus 37 versus my Nike React Infinity Run to compare the difference or similarity in rides.

I’ll check back in with you folks at the end of the month for a full report. I would have run more than the 50 kilometers needed to complete my World Vision Virtual Run for Children.