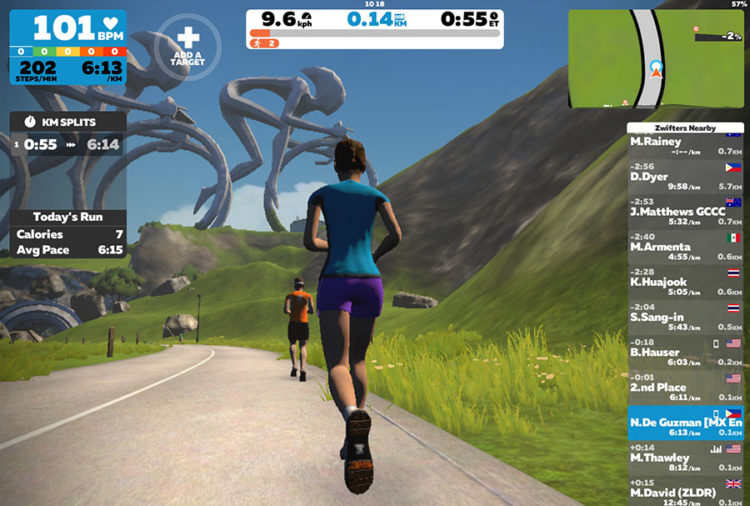 In the first month of enhanced community quarantine, we used to be allowed to run within our condo compound, in the parking garage. We were only “encouraged” to exercise indoors in our own homes. Unfortunately, some people abused the discretion given to us, using the excuse of “running” to meet up and socialise in large groups. So, when the second month of ECQ began, we were effectively banned from running outside.

While a few of my fellow triathletes and runners have been able to shift to running indoors on a treadmill, unfortunately in a 50-square meter condo unit that houses three people a treadmill takes up too much space. Initially, I coped by riding my bike trainer three times a week (see How I Use a Non-Smart Trainer with Zwift) and doing yoga and HIIT on the days in between. But there’s something about running that relieves my stress, and this week I badly needed it.

So on a whim, I decided to try using my Garmin Forerunner 945‘s Virtual Run mode with the Zwift app. Virtual Run was designed by Garmin to interface with apps like Zwift to provide heart rate, cadence, and speed data. While I don’t have experience using it on a treadmill as a basis of comparison, for the purposes of getting cardio in through a running-like motion (jogging in place) and playing Zwift to level up and rack up achievements, this will do!

Watch how I do it in my vlog:

Apparently, Nelson Mandela during his unjust incarceration would do stationary running in his cell for up to 45 minutes a day from Monday through Thursday. He said, “Exercise dissipates tension, and tension is the enemy of serenity. I found that I worked better and thought more clearly when I was in good physical condition, and so training became one of the inflexible disciplines of my life. In prison, having an outlet for my frustrations was absolutely essential.”

It’s a pale shadow of the true joy of running outdoors and indoors (yes, I appreciate treadmill running even more now), but in these exceptional stay-home times, jogging in place will do.