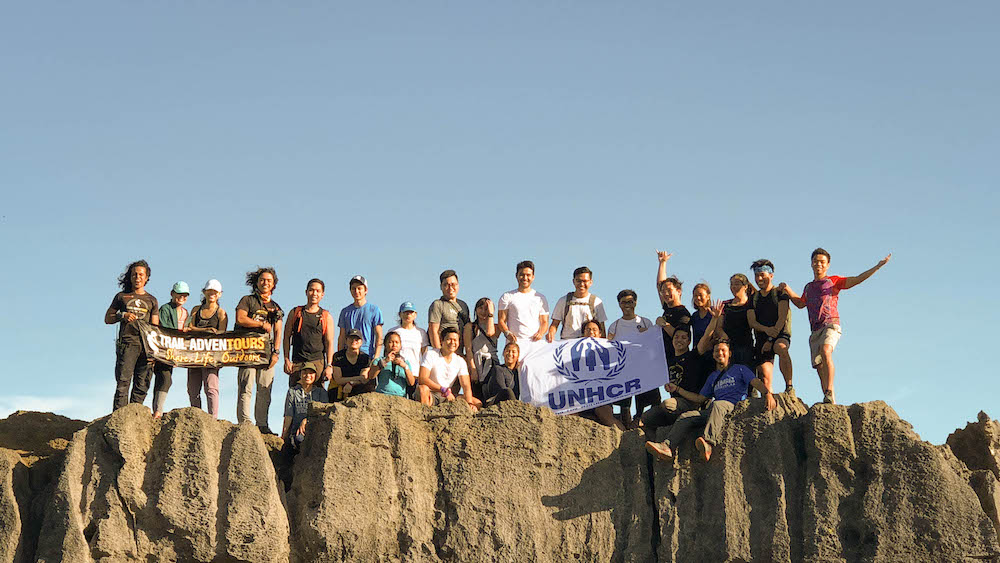 Two weeks ago while I was racing SuBIT, I missed a trek I’d been invited to join.

Last April 27, 2019, UNHCR Goodwill Ambassador Atom Araullo and eco-tourism group Trail Adventours hiked up Mt. Nagpatong in Tanay, Rizal. But this was no ordinary hike; it was to log kilometers in support of the plight of refugees and internally displaced persons.

According to the UNHCR (the UN Refugee Agency), refugees around the world walk an estimated 2 billion kilometers every year to reach the first point of safety. The UNHCR has launched a global campaign called “2 Billion Kilometers to Safety” calling on people all over the world to cover this distance travelled by refugees. Through this collective effort people can show solidarity, build better understanding of refugees and raise money to protect refugees and help them to rebuild their lives.

Trail Adventours has conducted several hikes in support of the Two Billion Kilometers to Safety campaign. Previous ones include an ascent to Mt. Everest’s Base Camp and up Mt. Pulag in Benguet. Trail Adventours has logged a total of 1,614 kilometers for the global target. The hike up Mt. Nagpatong would add a cumulative 150 kilometers.

Mt. Nagpatong, also known as Nagpatong Rock, is a hiking hot spot consisting of two towering limestone cliffs facing
each other with huge blocks of rock placed on top of each other. Trail Adventours co-founders Coby Sarreal and Guido Sarreal along with Atom led Filipino hikers and enthusiasts on the 2.5-hour Nagpatong Rock hike, which involved a challenging path, bamboo ladders, and vertical climbs. The hike drew parallels to the difficulty faced by refugees’ seemingly impossible task to make it to a safe place just by walking.

Watch the video below:

Join the next Trail Adventours hike to come every third Sunday of the month at Trail Adventour’s website trailadventours.com. Proceeds from these themed hikes will support the Two Billion Kilometers to Safety campaign. Learn more about the UNHCR and Trail Adventours partnership.

You can add your kilometers directly onto the campaign website at stepwithrefugees.org. I’ve synced my Fitbit app to automatically add any kilometers I rack up. Strava integration is also available, but you can also add kilometers manually.

To date, supporters of the campaign have racked up about two million kilometers running, walking, cycling, and hiking. I cannot imagine the two billion kilometers annually walked by refugees worldwide fleeing war, persecution, and famine. Just goes to show how massive this issue is, and how urgent the help they need.

Within the first 72 hours of a refugee emergency, UNHCR intervenes to deliver life-saving reception services to assist more than half a million people. Working with government authorities and local partners, their emergency response team quickly locates and identifies those needing urgent help to save as many lives as possible, and also transfer people to safer, more equipped locations to provide more comprehensive care.

You can also support by encouraging others to join the cause and helping to raise funds. Aside from reaching your own target distance, you can organize fundraising campaigns to help the world’s refugees either through your very own school, sports clubs or running communities. The UNHCR engages companies to support the campaign and donate. The fundraising target for the campaign is to raise USD 15 million (approximately PHP 795 million) to help deliver life-saving support to refugees in the moment they reach safety.