The thing with signing up for a race that takes place early in the year is you always end up training over Christmas time. That isn’t such a bad thing because you can hold off some of the expected weight gain. However, the heavy holiday traffic can make the logistics of getting to your training venues more difficult.

Thankfully, I’m not training for a triathlon, so no need to hie off to Nuvali for long rides. Running is significantly easier to manage, especially when you’ve got access to a treadmill. Still there is nothing like the sheer joy of running on the open road and it makes the required mileage pass a little quicker in your mind because the scenery changes.

Last week I got out onto my regular stomping grounds for what seems like the first time in ages. The BGC Greenway has been open for a while, but this was the first time I had ever set foot in it. 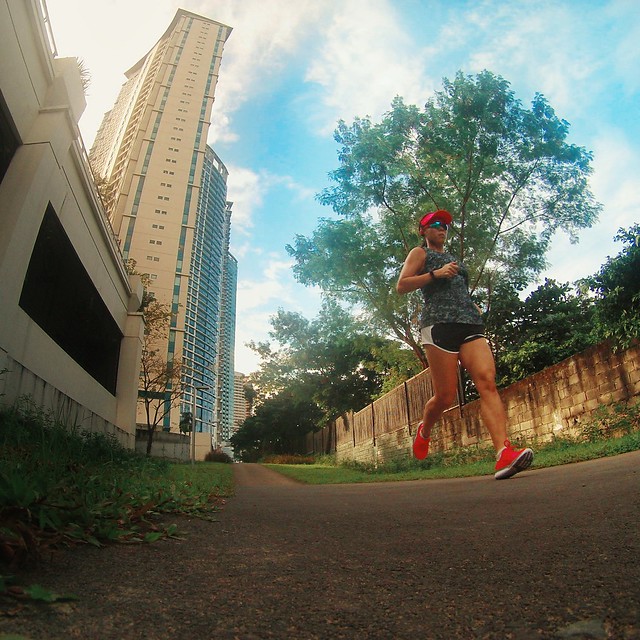 The Greenway used to be a strip of dirt that separated the condos and establishments of Forbestown BGC from Manila Golf Club’s perimeter wall. It was previously used by trail enthusiasts like Coach Ige Lopez to add some variety to their hill workouts (that gradient is a killer!), by condo owners’ helpers to walk their dogs, and by pedestrians taking a shortcut from McKinley Road down towards Forbestown.

When construction began on paving a path through its 1.5-kilometer length, I worried that it was just another roadway through which motorists would speed. I was pleasantly surprised to read all about the Greenway as part of BGC’s urban development. Kudos to them that even as BGC commercializes, they make a way to keep some of its greenery. As an urban runner it’s difficult to find spaces to run where you’re not constantly looking over your shoulder worrying about cars. That run along the Greenway was one of the most pleasant ones I’d had in a while, and I was sorry to leave it to run the rest of my assigned mileage on sidewalks alongside cars stopped at traffic lights.

The other things that makes training at this time difficult is finding time for it among other commitments. Christmas parties and get-togethers, last-minute shopping runs, and the like all conspire to tempt you to put training off for another time. But having great training venues to look forward to always helps me make the right decision.