I haven’t raced a triathlon at all this year due to my marathon focus. I just couldn’t pass up the opportunity to return to the Bintan Triathlon, a race I had “slayed” two years ago by placing second in my age group.

Getting to this finish line was tougher this time around.

Doing a triathlon out of the country is always bound to be an adventure, but I made it harder on myself by scheduling it the week before the Phuket Marathon. I’m the kind of person who wants to give everything I’ve got, but these two races so close together meant that if I wanted to do well in one, the other would have to suffer.

I traveled with Raymund Magdaluyo and Bea Grabador. Raymund you already know from my previous races with him to Phuket and to Bintan. Bea is on the marketing team for Powerman; she is also a former UP Varsity swimmer, member of the national water polo team the Philippine Sirens, and the winner of both the Atleta Ako Women’s Aquathlon and the Aquaman Aquathlon this year. This was to be her first triathlon in three years, and her first one overseas. (I think I should also mention she was on the developmental Alaska squad in 2013 when she raced Tri NOAH in Narvacan, Ilocos Sur, biking in her running shoes!) 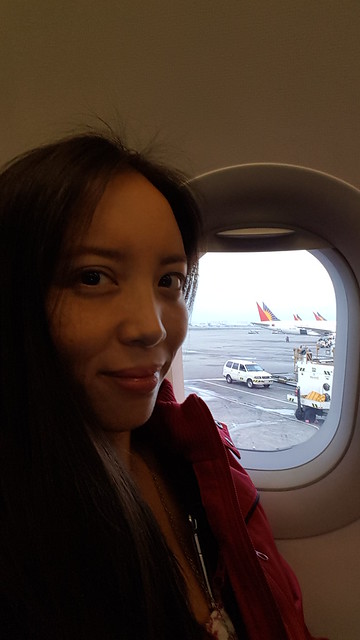 flying with “the heart of the Filipino”, Philippine Airlines! 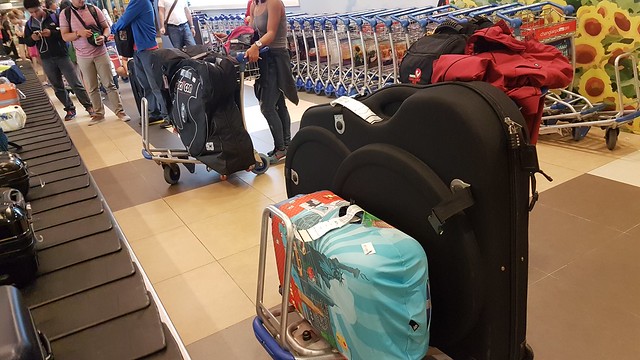 managed to keep everything under 30kg 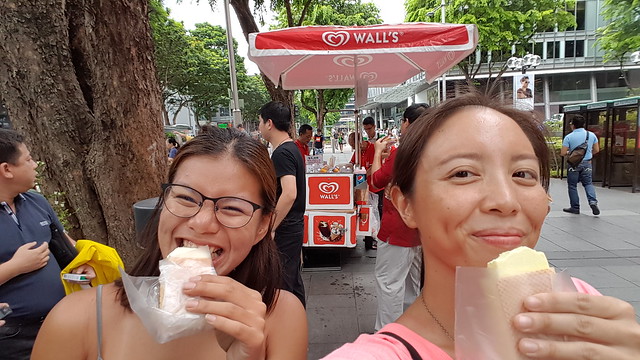 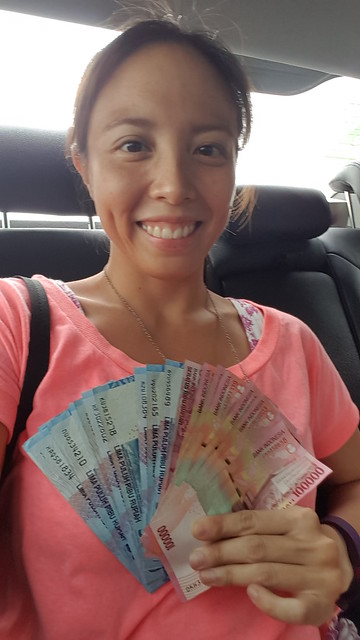 A lot of the pre-race hijinks were on my Snapchat, so check out the videos below for the scoop:

While the race takes place on the peaceful Indonesian island of Bintan, the metropolitan pleasures of Singapore are only a 55-minute ferry ride away. Being the inveterate shopper I am, I had to stop myself from buying anything when we were on Orchard Road for a few hours before getting on the ferry to Bintan on Thursday.

On Friday we were supposed to get our bikes checked over in the morning before going on a recon of the bike and swim course for Bea’s benefit. Unfortunately, all three of us had issues with our bikes and the mechanics were due to come in only at 2pm. Instead, we went for the swim, had lunch, and waited for things to start happening. Meanwhile I was in my wet bike kit starting to feel sick. Ugh. 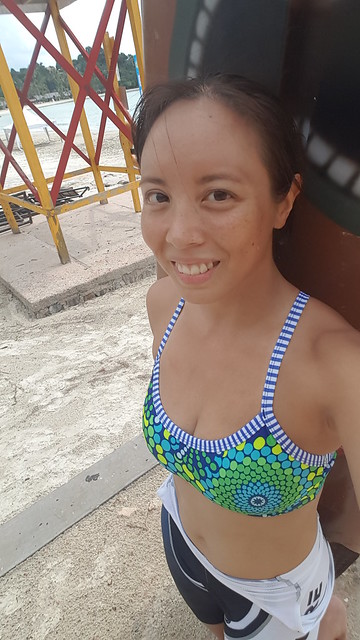 rocking my Dolfin swimwear during the test swim

In hindsight, that was the best thing to happen because it forced me to reduce my race day exertions and prioritize my health. I know my body well enough to understand that if I pushed any harder, I would topple like a house of cards. It was also part of the “taper blues” of lethargy, irritability, and phantom colds. If I kept myself well, I reasoned, my immune system would bounce back just in time for the marathon.

The good thing about the Olympic distance at the Bintan Triathlon is that it starts at 2pm instead of the usual 6am gunstart. The bad thing about this scheduling is that it starts in the brutal heat of the day! I was positively melting while waiting for transition to open, then had to rack my bike in the sun (so you can imagine what that did to the fluids in my bottles), then found some shelter in a shed, then in a cluster of palm trees while waiting for the women’s gunstart. 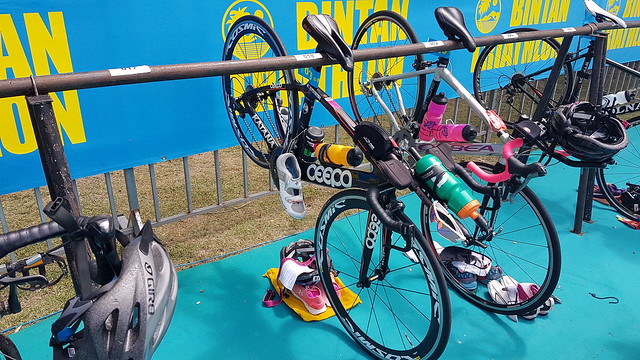 Think about how awful drinking hot tea is when you’re exercising. 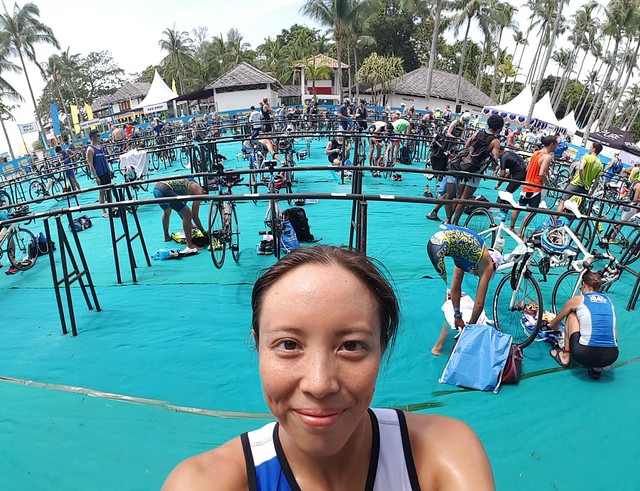 Sweating and the race hasn’t even started yet! 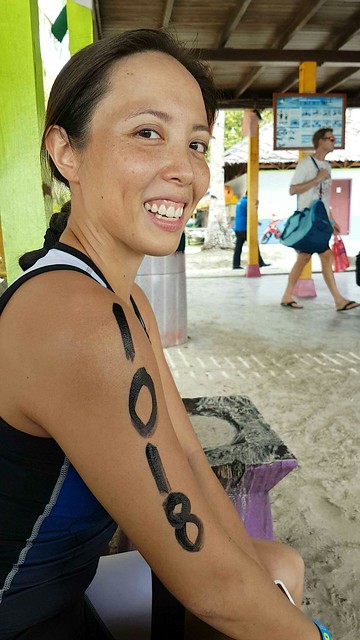 Happy in the shade

Honestly, if you know what I’m capable of over the Olympic distance, this race was a shocker. The only thing I’m happy about is a PR on the swim. Even if my Garmin showed it was kind of long and all over the place, I still swam 1.7 kilometers easy in 33 minutes.

The duck dives helped getting into and out of the water.

I was going to keep the bike leg entirely aerobic and aim to avoid all accidents. That meant keeping the pace steady and letting other people pass me. It didn’t help that my water bottles had been in the sun for an hour already. The one hydration stop on the bike course was at the 15-kilometer mark, which meant any chance of a cool drink to soothe my overheating core temp was going to be a while.

Check out the drafters already on their way back. Sheesh.

I was so relieved to get off my bike and start the run, not least because I encountered two ambulances scooping up those who had accidents. The run is the one leg that I have the most control over, so even if I ran it at a much slower clip than usual I felt very in command.

By this time, the sun had hidden behind clouds so it was a more comfortable temperature. I still finished a good 15 minutes behind my record on this course, but I was just happy to finish.

Proud to say nobody overtook me on the run. 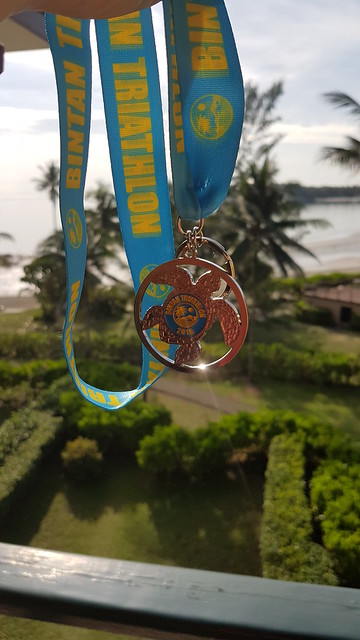 I still had to beg off from the awards party and dinner, which Raymond and Bea went to because Bea won her age group! She was also first female out of the water. Given that this was her first triathlon using cleats, and first triathlon in three years I can tell you now she will go far if she gets the right training and support.

After a good night’s sleep I felt recovered, so when we returned to Singapore I spent the afternoon walking about seeing the sights. The morning of our departure for Manila, Bea and I went for a run with Rakesh, a friend we made in Bintan. 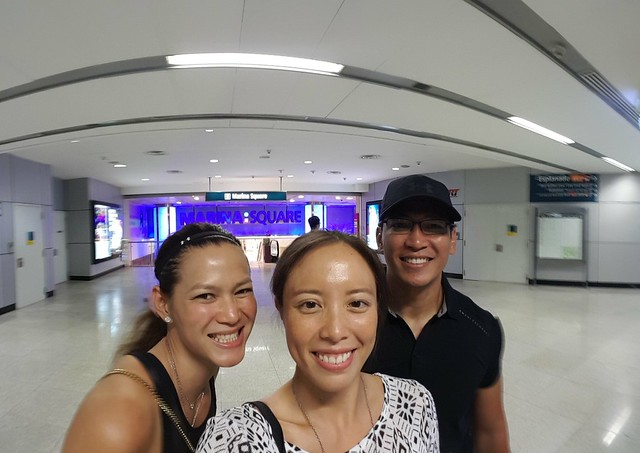 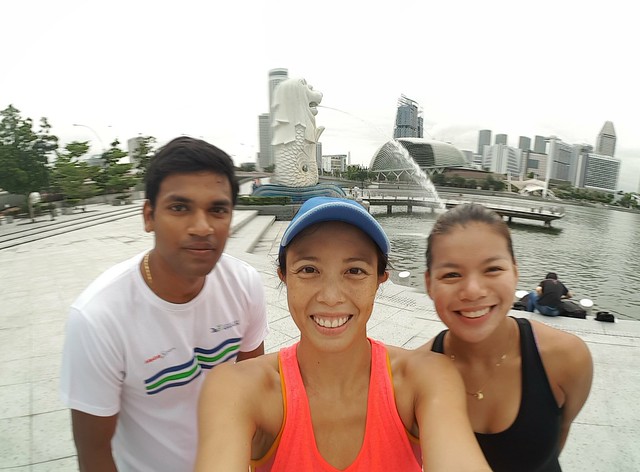 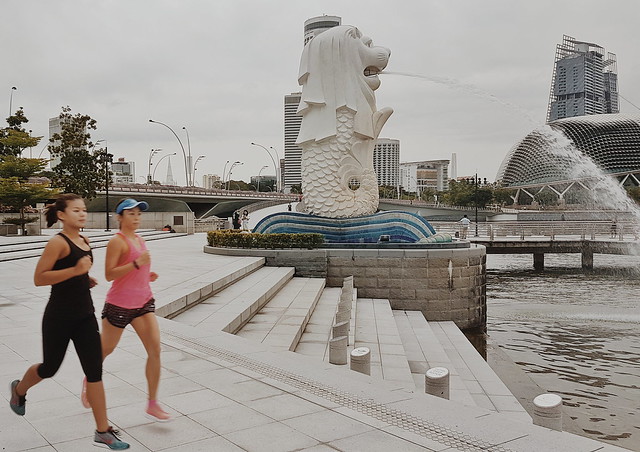 Singapore, why so pretty?

There’s always something to improve on as a triathlete, which is why this sport is so addictive — and I’m sure with different preparation and no marathon on the horizon this race would have been a different story. But right now, I need to think of myself as a runner and visualize myself crossing the finish line strong after 42 kilometers.

Phuket, I’m coming for you.