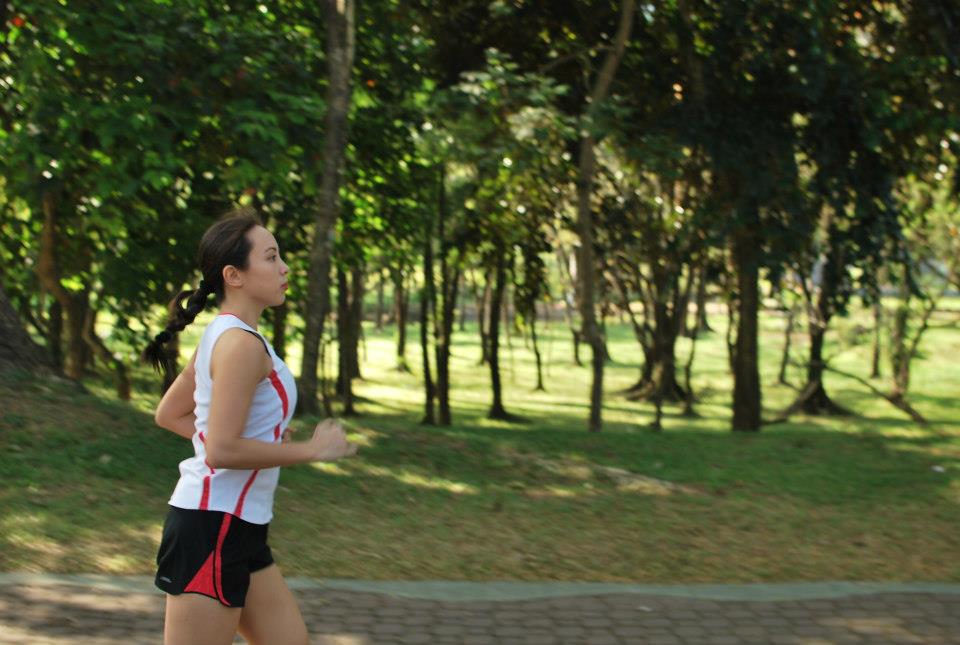 Being based out of Metro Manila has its perks. My work is here at the various gyms I teach classes at, all the good sports stores are within reach, and it’s where plenty of runs are held almost every weekend.

Unfortunately, training in the city is another matter entirely. Metro Manila the mega-city was cobbled together from different cities and municipalities that spread out and merged into each other, so there wasn’t any city planning to give us proper sidewalks, bike paths, parks, and sports complexes. It is also a highly-congested city with more than its fair share of vehicular traffic and pollution. These are not the ideal training grounds at all.

I sometimes find myself envying my buddy Joel who relocated to Cagayan de Oro City some years ago; he tells me he can ride from his doorstep out onto long stretches of road where he can train undisturbed for hours. He’s got access to a track and a pool as well, and I think he’s made the biggest leaps in his athletic fitness since he moved there. (The fresh air also has something to do with it, I think…)

But we’ve got to do the best with what we’ve got, and this blog post is an attempt at identifying the places in this city that most athletes I know train at.

Where can you train in Metro Manila?

You can run anywhere in Metro Manila — if you have the courage for it. My uncle runs 10 kilometers every day along Roxas Boulevard, which has wide sidewalks and clear pedestrian crossings. But the area around Roxas Boulevard is full of narrow streets and if you don’t know your way around them, it could be quite… interesting.

Most runners will head to the tree-lined avenues of the University of the Philippines Diliman in Quezon City, or the trendy streets of Bonifacio Global City (which has far too many stoplights now). Some with the right connections — or right face value? — may be able to get into the exclusive subdivisions of Forbes and Dasmarinas with its quiet roads and a choice between flat and rolling sections.

Ortigas is home to the twin hilly roads of St. Paul and St. Martin, which border the PhilSports Arena/ULTRA. When the track oval reopens hopefully by the end of the year, runners can once again do their sessions in style instead of dodging cars at the nearby Capitol Commons. There is also a nice small loop at Pearl Drive around the University of Asia & the Pacific.

The Mall of Asia complex has plenty of runners, but with the lack of tree cover, running after 8am in the summer becomes a huge challenge. Pack your sunscreen.

The Quezon City Memorial Circle hosts cyclists every Sunday on its innermost lane. The bakal boys keep a pretty fast pace and are able to shepherd mountain bikers out of the way safely, so if you can hang onto their wheels it’s a great workout.

On Saturday mornings, cyclists conduct criteriums on the roads of C5, Julia Vargas, Lanuza, and Ortigas. I have a teammate who did a bulk of his training for the Challenge Philippines bike course this way; he would also do hill repeats on St. Paul and St. Martin (mentioned above in the section on running).

During the week, Mall of Asia is a popular training ground, but beware novices in the pelotons and vehicles suddenly swerving into your path. When I train at MOA I usually just do individual time trialling and avoid the big groups. On Sundays the nearby Macapagal Boulevard and some roads around the Aseana complex are used for bike races and bente-bente criteriums (with casual betting on the side).

Down in Alabang, cyclists train on the long stretches of Daang Hari and Daang Reyna, and if they are residents or know someone who lives there, they can train inside Ayala Alabang Village, which used to be a popular place to hold sprint triathlons. Another alternative in the area is Filinvest; on weekends they close off the roads to encourage runners and cyclists to train there.

It’s tough to put together a solid long ride within the city only, which is why most cyclists head eastward to the nearby province of Rizal, or south to Cavite and Laguna for rides. But those are outside Metro Manila 😉

This is actually Betsy the Swimjunkie‘s realm of expertise as she keeps abreast of most of the swim venues open to public use. She recently lamented the loss of the San Beda pool, which has now restricted use to students only. Most pools down south are now members-only: Alabang Country Club, The Village Sports Club, and Palms Country Club. Olivarez College Indoor Pool in Sucat is still open for public use though.

In Ortigas, ULTRA/PhilSports Arena’s 50-meter pool is good and cheap (at P60/head). It has lane lines, a shower room, and more-or-less good water quality. Unfortunately it’s only open to the public from 8-11:30am and 1-4:30pm. So if you have an 8-to-6 office job, it’s really out of the question.

The Makati Aquatic Sports Arena (MASA) is another good swim venue frequented by my teammates. If you’re a Makati resident you get a significant discount on the entrance fee. It can get quite crowded, but if you ask nicely you can get to share a lane (and win friends?).

The Army pool at Fort Bonifacio used to be my team’s regular swim training grounds. Some underwater hockey is played there on certain nights, which means that after 8pm instead of swimming 50 meters lengthwise you may be asked to swim the crosswise 20 meters. There are also no lane lines so you might end up knocking your head against someone swimming from the other end of the pool.

The indoor pools found at Ace Water Spa branches are great; they are clean, temperature-controlled. Did I mention clean? The price may be prohibitive though, at P550 a pop.

Most triathlon swim coaches teach at set venues; for example, my coach Nonoy Basa (a co-founder of Streamline Sports Instruction) runs classes from his Valle Verde 1 condo pool on Mondays and Wednesdays. They may also have arrangements with fitness clubs and other members-only venues, so it’s best to ask a prospective coach where you’ll be swimming. Frequently training under a coach’s expert eye results in faster improvements as they can catch errors, correct your form, and give you a program to follow and adjust it on the fly as they see you swim.

These training venues are all just off the top of my head; I’m sure there are many others, hidden gems, that athletes in Metro Manila frequent. Do you have other training venues to add or suggest? Please share and comment below!

32 thoughts on “Where Can You Do Run, Bike, and Swim Training in Manila?”