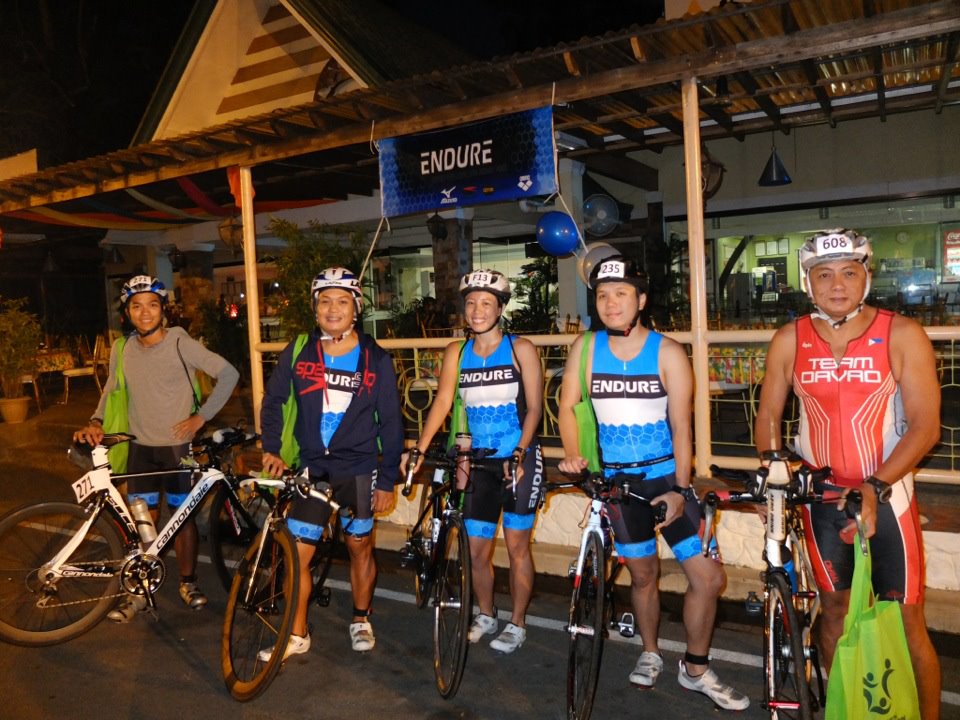 //platform.twitter.com/widgets.js
It was the night before my first standard distance triathlon (1.5km swim – 40km bike – 10km run). I had been training for this for a few months, dreaming about it since I did the sprint distance at the previous year’s edition. But in the wee hours before I needed to get up to get ready, I kept having nightmares about the swim leg of the race — deep dark salt water populated with jellyfish and thrashing arms and legs.

“How do you eat an elephant?”

I knew going into SuBIT I had bitten off more than I could properly chew. “How do you eat an elephant?” asks the old adage. “One bite at a time.” If I ever hoped to finish the race in one piece, I had to take everything a bit at a time to keep myself focused and un-panicked.

Being the only girl on Team Endure to compete at this race also left me feeling out of my league. I’d have to bike with the boys to Dungaree Beach from our hotel to reach Transition 1 since nobody else was getting driven up there. (At SuBIT, T1 and T2 are separate areas and the finish line is 10 kilometers away from the swim start, so it’s difficult to get back to your car after finishing the race.) the only rose among the thorns ^

The bike ride took longer than I expected, and by the time we reached T1, we only had nine minutes before the transition area was closed. I still had to get body marked and retrieve my timing chip from Finishline, which was handling the logistics for timing the women’s races. And I was set to start in the second wave with the rest of the women. Stress!

I had a bit of time to chitchat with some friends from the tri community on Dungaree Beach (oops! It’s now known as “The Sands of Triboa”). I wished Kuya Kim Atienza well on his first triathlon ever, then took my place in the middle of the pack at the start chute. As I looked out across the water, I prayed for God’s grace so I could finish the race within my target time (3 hours, 30 minutes).

“Riding on the boys”

Being in that mass start was nothing new to me, and I tried swimming freestyle as long as I could amid all the slippery bodies around me. Tired of having someone’s foot in my face all the time, though, I finally flipped over onto my back and started backstroking. Not really great, but it did the job. I would freestyle to overtake people, then flip over to backstroke to recover. “I thought she was a man,” said the woman who came up after me. *

I rose out of the water on the beach, and with a sinking feeling went to do my second loop. Barely 50 meters out, I heard a starting horn and realized the third wave of swimmers, comprised of men aged 25-29, had been let loose. I was about to be run over!

As this huge bolus of male swimmers swarmed around me, I realized with my backstroke I could lean back against them and sort of do a reverse piggy-back while still paddling with my arms and legs. After I rested this way while still moving through the water, most of the men dispersed, and I was free to swim in relative peace. And that’s how I survived the swim.

Out of the water into transition 1. That was quite a long run, since the whole transition area stretched out for about 150 meters, and we had to run to the opposite end of it to enter and find our bikes.

I knew getting out of transition quickly was crucial, since my swim hadn’t gone so well. After taking a Gu gel and a bottle of water, I was on my bike. My strategy was to keep my legs going on the hills of Corregidor Road with a light gear, and overtake any bike with a female riding on it. I’m spinning around, move out of my way *

I had neglected to bring enough hydration and nutrition, though. It was a 40-kilometer ride on hills and flats, so it would take me more than an hour and a half to negotiate. I had only brought 500ml of Gatorade and didn’t bring a Gel to eat on the bike. By the time I was on the flats, I was dry as a bone. I wasn’t feeling fatigued heading into transition 2, though. I thought I was just thirsty.

After chugging down another bottle of isotonic water with electrolytes and sucking on a gel, I was out of transition 2 in my Mizuno Wave Elixir 6 shoes. It was going to be a 10-kilometer run and I normally use my Inspires for runs longer than 5 kilometers, but after heavy use of my legs on the swim and bike, I was thankful for the Elixir’s light weight.

I did fine on my first kilometer. Then the cramps (due to malnutrition and dehydration on the bike leg) started creeping in on the inside of my lower thigh, just above my knee. It felt like my kneecaps were twisting inwards, and I started walking. My legs started stiffening further. At that point I had thoughts about being forced to quit — but I didn’t want to! I’d come this far.

I don’t know where the crazy idea came from, but it suddenly came to me to try to run in my condition. As I broke into a jog, I realized it hurt more to walk than it did to run! So I just kept on going. The cramp disappeared from my thigh, then started threatening my calves and hamstrings. Each twinge, I used to whip my body to go further, and faster. Chicking a boy or two *

My last gel, which I had stuffed into the top of my trisuit at the beginning of the run, had leaked most of its contents out. Frustrated, I sucked my top’s fabric to retrieve some of the gel’s much-needed nutrition. Para-paraan na lang.

And so, with a huge sigh of relief and a big “Thank you!” in my head to God, I finished my first standard distance triathlon with a time of 3 hours and 19 minutes — eleven minutes ahead of goal time. Thanks everyone for the SuBIT well-wishes! I finished under my target time & managed to chick some boys 😉 I love my team @ENDURE_Multi <3

//platform.twitter.com/widgets.js
I was very pleased with achieving my goal time, knowing I’m not as accomplished a triathlete as most of the women in my age group (aged 25-29 years old). This was also my first year to compete among them, since I had done only sprint distance last year. So, this took me by surprise: 5th place in my age group

This race was a mix of both my nightmares and my dreams coming true. Truly, God’s grace goes above and beyond what we can ask for or imagine.

Can’t wait to improve on my time next year!