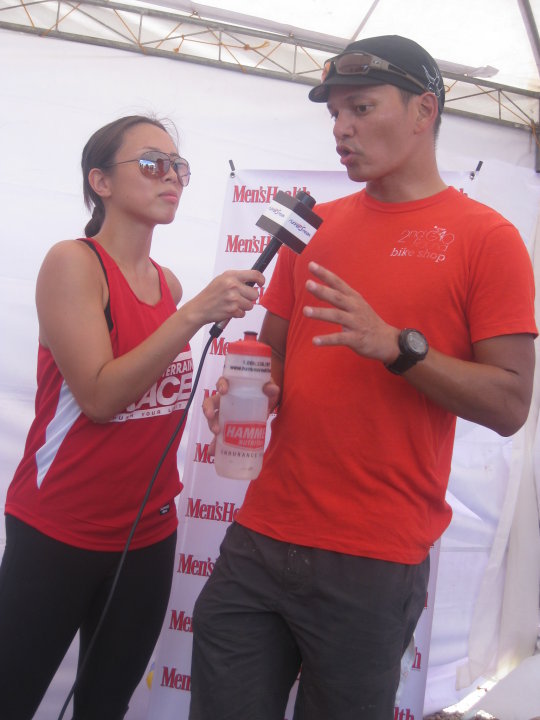 My hosting job with Runnerspeak has its perks, not least of which is gaining (free) entry to the biggest races. Yesterday, my job took me to Nuvali, Laguna to participate in the Men’s Health All-Terrain Race. This was a trail run and bike event, offering 6K, 10K, and 16K distances for the run, and 20K and 40K for the bike. For those crazy people who wanted an offroad duathlon experience, there was a combined 10K run/20K bike category.

I met up with some people from Takbo.ph who were running the 16K trail. I was only doing 6K because I was still traumatized from my first trail run, where a 3K turned into a 9K when I got lost. Haha.

While their 16K would take them on plenty of river crossings, my 6K only wound through wide, dusty trails cutting through swathes of tall grass. The only respite from this were short stretches of concrete pavement. For all their trouble, though, they’d all get finisher’s medals. I would have to fight for a medal of my own. Running on Trails with Boys

I felt a little ridiculous wearing a hydration belt at a 6K, particularly when everyone else was running light. I clung to my belt stubbornly though; what if I got lost again? Praning.

At the 6:01am gun start, people started off strong. I was wearing Kiko again but didn’t look. Instead, I was focused on keeping a comfortable pace that would keep the lead pack in sight. I would make my attack later on, when I knew people’s speeds would drop off. (Post-race, I was still surprised to see I hit a 3+min/km pace during my first kilometer. Tsk, tsk.)

And then I realized I was running with the boys — ahem, I mean men. The last woman I had seen on the 6K trail I had overtaken early in the race. Could it be? Was I going to come in first?

I couldn’t allow myself to celebrate too early, since that was what had happened shortly before I got lost during the Merrell Run. Instead, I focused on keeping the runners ahead of me in sight. They were two teenage boys who would take walk breaks, but as soon as they heard me coming in behind them they’d blast off like a shot from a rifle. I didn’t manage to overtake them, but they did pull me towards the finish line faster.

As I passed the last few water stations while swigging from my hydration bottles, the marshals told me I was the first female. I didn’t celebrate until after I’d passed the finish line marshals, though. When I met up again with the Takbo peeps, they remarked at how clean my shoes were. LOL! WOOT! is all I can say

The Men’s Health All-Terrain Race made me give trail running another chance. Next time, I’ll bump up the mileage (on purpose, mind you!) and get to take in the sights, smells, and sensations I missed on my first two trail races. I give this race FOUR KIKAY PINKIE FINGERS out of FIVE.