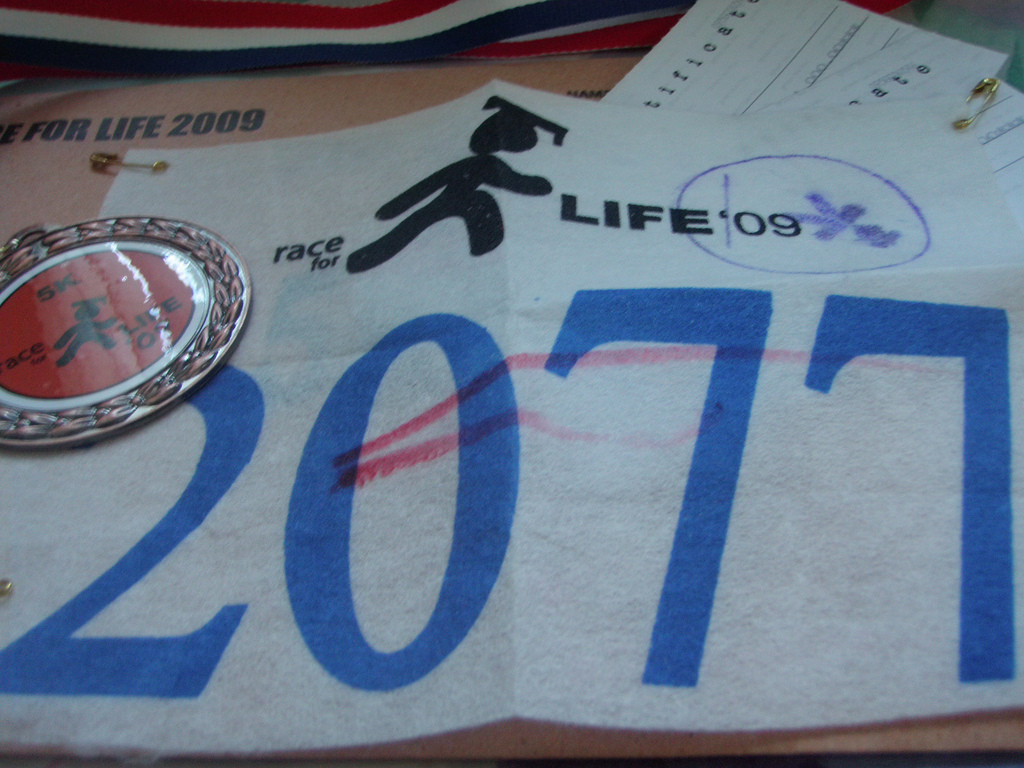 Due to a strange and mysterious confluence of events (LOL!), I found myself signed up for consecutive races last weekend: Race for Life on Saturday the 24th, and Adidas King of the Road on Sunday the 25th. Race for Life had been moved from its original date in September due to Ondoy, but I still wanted to run it with my friends. I’d considered skipping KOTR, but then got a slot for free from my Action&Fitness Magazine editor. I jostled for space at the very front of the pack, wanting to get a good start. I was competing against friends who were trying to beat their 5K times from last year, and even though I didn’t run last year, I was still determined to keep up with them.

Based on what my friends told me, the turnout this year wasn’t as big as last year’s. Whether it was because of Ondoy causing the race’s postponement, or because the Subic International Marathon was scheduled on the same day, or because KOTR was happening the next day, there weren’t too many elite runners signed up (and most of them had signed up for the 15K and 10K distances). That paved the way for me to winning the bronze medal in the 5K women’s category, with a time of 24 minutes and 41 seconds! Podium finish — therefore my racing life is complete. Ü I even got to share stage space with Rica Peralejo and Donita Rose, who hosted the awards ceremony after the race. If running a 5K is like window-shopping (like Rose told me last Monday), I went and won myself some Nike Park gift certificates to shop with! I don’t know what I’ll buy with them though; I just bought a new pair of dance shoes and I don’t really like Nike’s apparel choices this season. Maybe I should just get a SportsBand to help me keep track of my mileage. Or not; I use LogYourRun to map my routes out anyway. I should just get new running tights; I found my legs fatigued quickly while running in short shorts. Would I still be able to run KOTR the next day?

Adidas King of the Road

I got home pretty late from Fashion Week and going out after, so I told myself I’d only take a short catnap, then get ready to head back to Fort for the 10K race, which was set to start at 6am. After jumping into the shower then into my race kit, I drove like a madwoman and would have been late by only 10 minutes — if I hadn’t run into a solid wall of yellow-clad runners making their way past an intersection on their way to Kalayaan flyover.

Feeling dejected, I parked and made my way to the staging grounds thinking I’d just collect my freebies. Then I saw someone start their run. I pulled myself together, got my bib checked, then ran out the gates as well. I didn’t bother to check how much time had elapsed on the clock before I started. The important thing was to run. After all, I didn’t want to waste my outfit. Ü

I was running against the flow of a steady stream of people already on their way back. Although I came face-to-face with some familiar faces, I was running the race pretty much on my own. But as I came around the halfway point, I started overtaking runners who had slowed down, spent from the earlier sprint off the blocks. I ran at a steady pace, not really pushing because I wasn’t chasing a personal record. I even had enough time and breath to yell, “Let’s go, Miss BB!” when I overtook BB Gandanghari (nee Rustom Padilla).

I arrived at the finish with 1 hour 16 minutes elapsed on the clock, but with a huge sense of accomplishment. Even though I hadn’t managed to beat the clock, I still felt like a winner. It was then I realized I didn’t run because I wanted to win a prize. I run because I want to, period.

Next time, though, I swear I will set four alarms to wake me up for an early morning race!

6 thoughts on “Back-to-Back: Race for Life & King of the Road”