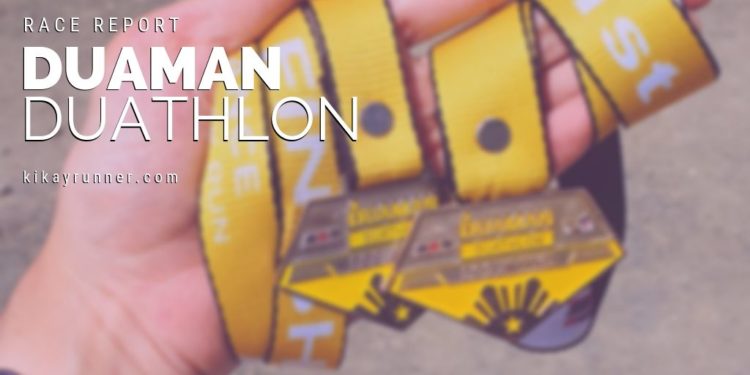 Most experienced triathletes will tell you that a duathlon hurts more than a triathlon. Duathlons truly put the hurt on the legs and lungs all throughout. This is the reason why despite nearly a decade doing triathlon, I did what was only my third one last Sunday, the Duaman Duathlon at Camp N, Nuvali.

And unlike the majority of the participants out there joining the Full category (6K run-20K bike-3K run), I opted to join the Lite category of 3K run-15K bike-3K run. Physically, maybe I could have handled the Full albeit maybe with a lot of cussing involved running and riding over Nuvali’s hills. Mentally, I wanted to cross a finish line but just didn’t want to hurt for very long — so the Lite was perfect for me.

My race suit from MX Endurance had arrived a few weeks ago, a custom make from Rocket Science Sports. What makes this suit special aside from its striking design is how you can specify the country flag printed on its left shoulder. While I don’t plan on racing again in this suit (going to make it a cycling training kit! you’ll see it more often in Nuvali), since Philippine Independence Day was on June 12th and the race date was set for the same week, I really wanted to rock that flag design.

I slightly underestimated my travel time to the race venue, so by the time I had parked and pulled all my stuff out of the car, I had barely 15 minutes to retrieve my race pack, set up my transition, and use the facilities. I squeaked into the start chute with only 90 seconds to spare before gunstart. (Whew! 5/7 would not recommend.)

My heart was already racing when we were let off, so I needed to pull my effort level back and make sure I had enough left for the succeeding legs of the race. After all, this was only the first run. So I calmed myself down, started dousing myself with water right from the very first aid station to keep core temperature cool, and found a good rhythm as we tackled some steep inclines. There was one loooooong hill and then two small rollers before the U-turn.

What goes up must come down, so the return leg on the out-and-back course was much faster without a lot of effort, and I ran into transition as the first female competitor. While the bike course would have us puffing up one long incline and three more false flats, it wasn’t any different to what I would normally ride as part of a Saturday long ride in Nuvali (familiarity with a course has its advantages). So I knew when to push, and when to ease off. Despite being passed by five male competitors, I knew I had the overall win within reach.

(The fiercer athletes were all signed up for the Full category, which was the second qualifier race for the SEA Games.)

Of course, I still had to cross the finish line, and that meant doing that 3K run again. This time I chose to brisk-walk up the long hill. It got hotter as the morning progressed, and I didn’t want to risk stressing my body too much. I had suffered from heat exhaustion two weeks ago simply from hanging out too long in an un-airconditioned food hall, and I didn’t want to feel that way again.

Finally I turned onto the finish chute, and the finish arch was in sight. I breathed a sigh of relief, and then heard shuffling behind as someone else not in age group F30-39 sprinted to overtake me. With only 25 meters to go on loose and pebbly soil, I figured one or both of us could get hurt if I matched the sprint. Instead, I let them have their moment, and got my own moment holding the finish tape aloft.

In all, it was a good one-hour effort which was just what I needed to make some space for a big Father’s Day dinner, LOL. Pretty awesome to chat with some friends post-race also just to catch up.

Congratulations to SBR.ph for putting on another great race, and well done to all the finishers! On to Triman Triathlon in six weeks’ time…