I have always found that decreasing mileage and intense efforts during the last two or three weeks before a long-distance race helps keep me fresh so that when I step on the starting line, I’m raring to go.

Unfortunately those weeks are a nerve-wracking experience for people like me who’ve grown accustomed to long and intense workouts. 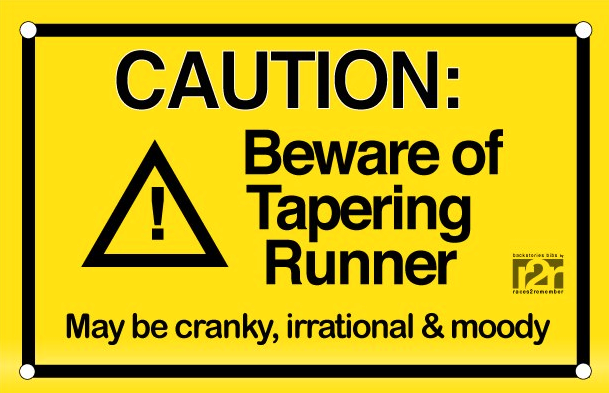 If you’ve been training four months for a goal race, you get into a groove or a habit of training and exercise. It’s quite difficult to let go of when you enter what we call “the taper”.

For my first marathon, I was forced to rest two weeks before race day when I got signs of plantar fasciitis after a 35-kilometer long run. Back then I didn’t have a structured marathon training plan; I just ran twice during the week for fun, and once a week I would do a long run and gradually built up the mileage. I had no clue what a taper was or what it could do for me, but my feet recovered during those weeks of less running (short and easy sessions only), and on race day I was really happy I could run again!

I learned the value of the taper then, and I’ve been able to apply it to all my long races afterwards. Last year before Ironman 70.3 Philippines I had a major training weekend at Pinnacle Camp which was two weeks before the race, then tapered and had a really great debut at the half-ironman distance.

So what exactly happens during the taper? 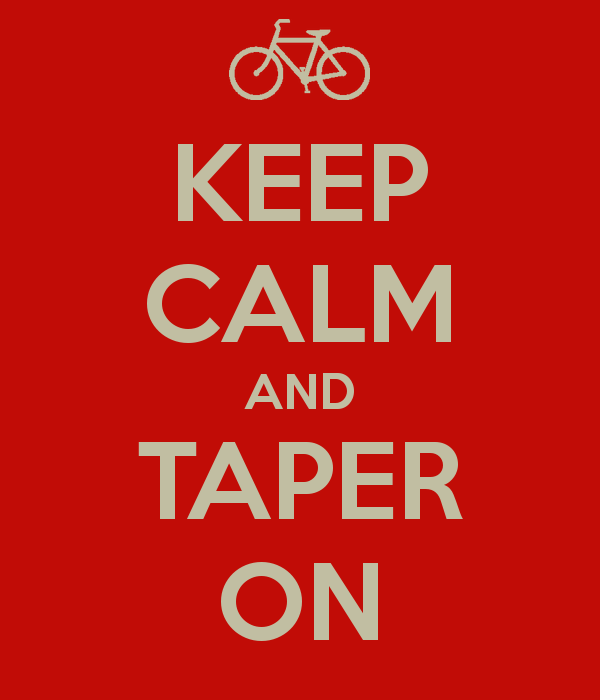 Keep Calm and Taper On

So you don’t lose any fitness during those weeks of decreased mileage. In fact, you become even fitter. When you work out or train, you damage muscle fibers and put stress on your body. It’s when you rest and recover from those efforts that the body is able to rebuild itself stronger. Joe Friel in his book The Triathlete’s Training Bible talks about this “supercompensation” process and emphasizes plotting recovery daily, weekly, monthly, and yearly into your training plan.

Friel says, “Since it takes about ten days to realize the full benefits of a given workout, training with a high workload beyond the tenth day prior to the event is unlikely to produce additional fitness.” He also says that it’s far better to be undertrained and eager than to be overtrained and unmotivated.

So if science says a taper is good for you, why is it so hard for most of us to do?

Athletes — runners, triathletes, dragonboat rowers, etc. — of any level are a pretty motivated bunch. I find more often than not our enthusiasm way outpaces our bodies’ current capabilities. The mind is willing, but the flesh is weak. 😉 Often and especially when at your fitness peak it may seem like such a waste to chill on the training. A certain degree of overloading results in improvements, but there’s no hard-and-fast rule on when to back off. For some athletes, especially the highly-trained ones, they can tolerate a lot more fatigue before needing to recover. Other athletes are genetically gifted with a greater ability to recover. The art of training, according to Friel, is knowing where the edge of overtraining is for you. If you don’t know or can’t tell, err on the side of doing less and resting more.

I will admit that this past training block for Challenge Philippines has been one of constantly dodging signs of overtraining. I didn’t have the year-end break that most triathletes were able to take because I was still racing all the way through ’til end of November. And then it was time to start training for Challenge.

It’s now eleven days to go before Challenge Philippines, and I actually was forced into this taper because at the Challenger Camp two weeks ago I felt pain in my knee as I was running a downhill. These past few weeks I’ve dropped my running mileage and stretched and foam rolled to help my inflamed IT band recover.

With all this free time from reduced training, my mind now has a lot more time to wander — and worry. What if I haven’t done enough to survive that brutal course on race day? Last week I felt great, but this week I feel blah! Am I going to gain weight from doing so much less? Uh-oh, was that my IT band hurting? 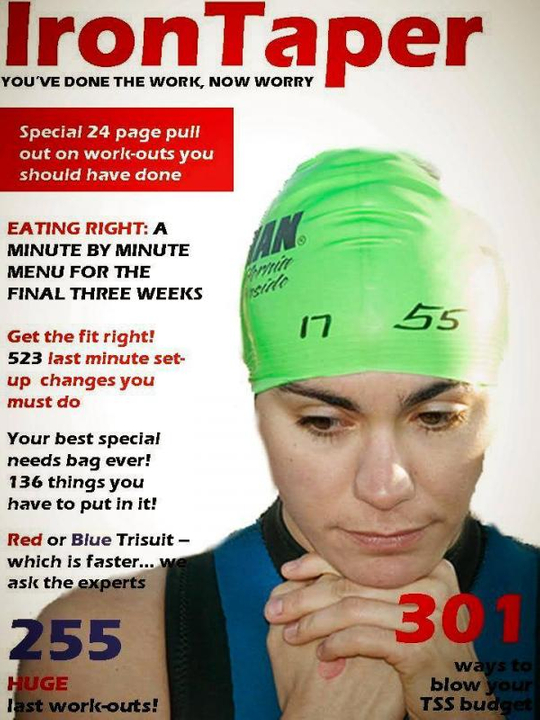 So here’s what to expect when you start tapering, and how to deal with it. This is the art of the taper, where there are no hard and fast rules.

You’ll feel awful initially. Rest up. Chris “Macca” McCormack writes in his book I’m Here to Win: “When you’re doing an endurance routine, your body tends to hide a lot of its fatigue sometimes, and you tolerate it. Then when you begin a taper, your body sometimes says to itself, ‘Oh thank God that’s over,’ and it starts to shut down.”

As endurance athletes, our long sessions (over 90 minutes) depress our immune system, so we’re at greater risk for illness during and right after the heavy weeks. Our bodies are also very used to the endorphins and other good stuff that gets into our muscles during exercise, and decreasing amount of exercise can produce feelings of withdrawal. Sometimes it can make us downright cranky not getting as much as we are used to! Exercise, I mean.

Before Ironman 70.3 Philippines I felt this. I was at the peak of fitness; running with the Thursday group suddenly felt easy. Then when I went into my taper, I got a sore throat, a slightly stuffy nose, and just felt sluggish. This is absolutely, completely normal and not something you should worry about.

Macca takes a week during which he expects to feel horrible, but it’s a week of pressure-free training with no guilt attached to missing sessions. He writes, “The key to tapering is sleep. Rest, rest, rest. Don’t squeeze in one more session. The hard work is done… You’re saying, ‘Thank you body, for cooperating.'”

You’ll worry you haven’t done enough. Get a reality check. You may have seen other people also training for the same race still hitting the big miles or intensities. You may have read about the kinds of workouts the pros do and feel bad you didn’t do any of those things. Etc., etc., etc.

I find what really helps me is looking back at my training log. I keep mine on Strava because it shows me graphical representations of how much work I’ve been doing.

I did some pretty heavy training in January, but did a good job of listening to my body and backing off. There was a week where my resting heart rate and blood pressure were higher than normal, so I dialed back the workouts the week after and my cardiovascular system was able to recover. My ITBS happened the week after I’d done a PR at a half-marathon, even if I’d given myself a pretty easy week after.

When I look at all I’ve done it’s easier to accept that I really need to take it easy if I want to make it to race day. Whether taper started three weeks or two weeks before race day, the most important thing is to get to the starting line healthy and injury-free.

You may gain weight. Fuel appropriately. The second week of the taper is also usually the time to carbo-load. I’m not saying eat a whole pizza every night, but usually on the plate, the portion of carbohydrates gets larger in relation to the rest of the food groups. High-carbohydrate foods can make you retain water and can make you feel bloated and heavy.

Now’s not the time to go on a diet because you do need to have the glycogen stores in your body topped up. Of course, now’s not the time to binge as well. Personal trainer and multiple ironman Ben Greenfield gives a reasonable carbo-loading scheme in a 2009 column on Trifuel.

Your confidence may flag. Visualize success. So the doubts start creeping in because you don’t feel like you’re doing enough. At this point the only thing you will need to work on is your mental game. The physical training you do during the taper is just enough to “keep the engine turning over” so you can rev it hard on race day.

Go back over your training log and realize just how much you’ve done. Remember the training sessions that were particularly difficult to get through, but you did. Know that each session you did, no matter how short or light, is something that has built you and made you the athlete you now are. If you put in the time and effort in training, you will make it. See yourself overcoming heat or humidity or other challenges. See yourself crossing that finish line.

Amby Burfoot, co-author of The Big Book…, writes: “Without the right taper, all of your hard-earned fitness can go down the drain faster than spoiled milk. None of us is that wasteful. We want to train, and then we want to see our training pay off with a strong race effort.”

I always say, “Better undercooked than overdone.” What it comes down to is that you are doing all this training to peak for a goal race. Don’t underestimate the benefits of a good taper. Come race day, you’ll be rested, excited, and can perform at your best. Go!

5 thoughts on “The Art and Science of the Taper”