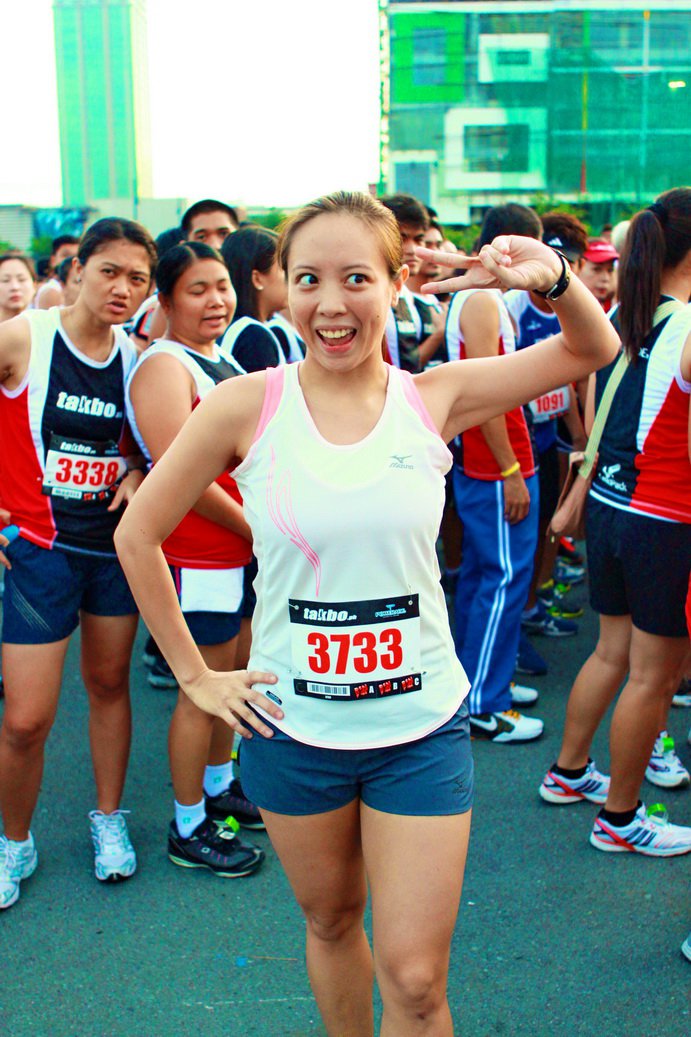 I thought that I wouldn’t be able to join this year’s TAKBO.PH Runfest, which was the second edition after last year’s successful event. Right after my injury I was demoralized and couldn’t even consider running any sort of distance. But when the cast came off and I started rehabbing my elbow, I felt that familiar itch, and after running about during Tri United I was positive I could handle a 5K run.

Unfortunately, I hadn’t registered for the Runfest, so I was thankful and delighted that Powerade sponsored my race kit. 
I was glad that Powerade (and Viva Mineral Water) had continued to sponsor the Runfest’s hydration needs. It was one of the things that had made last year’s Runfest such a success, since there is always plenty of Powerade and water at long hydration tables, and a bottle of cold Powerade awaits at the finish line. (Two bottles, if you make pa-cute to the models manning the table. Hee hee.)

I went into this 5K race after a two-week layoff. Although I’d had some aerobic activity at the gym using a stationary bike and elliptical trainer, that was only once the week before. I had swum twice the week before the race, but that only resulted in me being slightly sniffly with a cold during the race itself.

Obviously, this year I wasn’t as fit as I was last year, so I relied a lot more on hydration just to keep me motivated and to keep my legs going. My strategy was basically just to make it from hydration table to hydration table, where I would take walk breaks and assess how I felt. I mean, I didn’t want to get sidelined again just as I was coming back. Looking forward to a good run

Well, I survived the 5K, although it is my slowest since my recovery run from my first marathon last year. My elbow felt heavy and I couldn’t really swing my arms (in short-distance races, upper body rotation and arm swing contribute a lot to speed), but my legs felt good and it was just great to sweat again. And at least, with Powerade in my tank, I got that energy boost I needed to get me across the finish line. I was surprised when they told me I was the 5th female to cross.

I spent the next two hours chatting and getting photos taken with TAKBO.PH friends I hadn’t seen in a while (three weekends is an eternity in the running world!). Sprint to the finish

I loved making my comeback at this race event which means so much to me. (It’s my running anniversary race!) It was wonderful to get such a warm welcome. Thumbs up to Leadpack for a well-organized race; I couldn’t have asked for anything more. I give this race FIVE KIKAY PINKIE FINGERS out of FIVE!