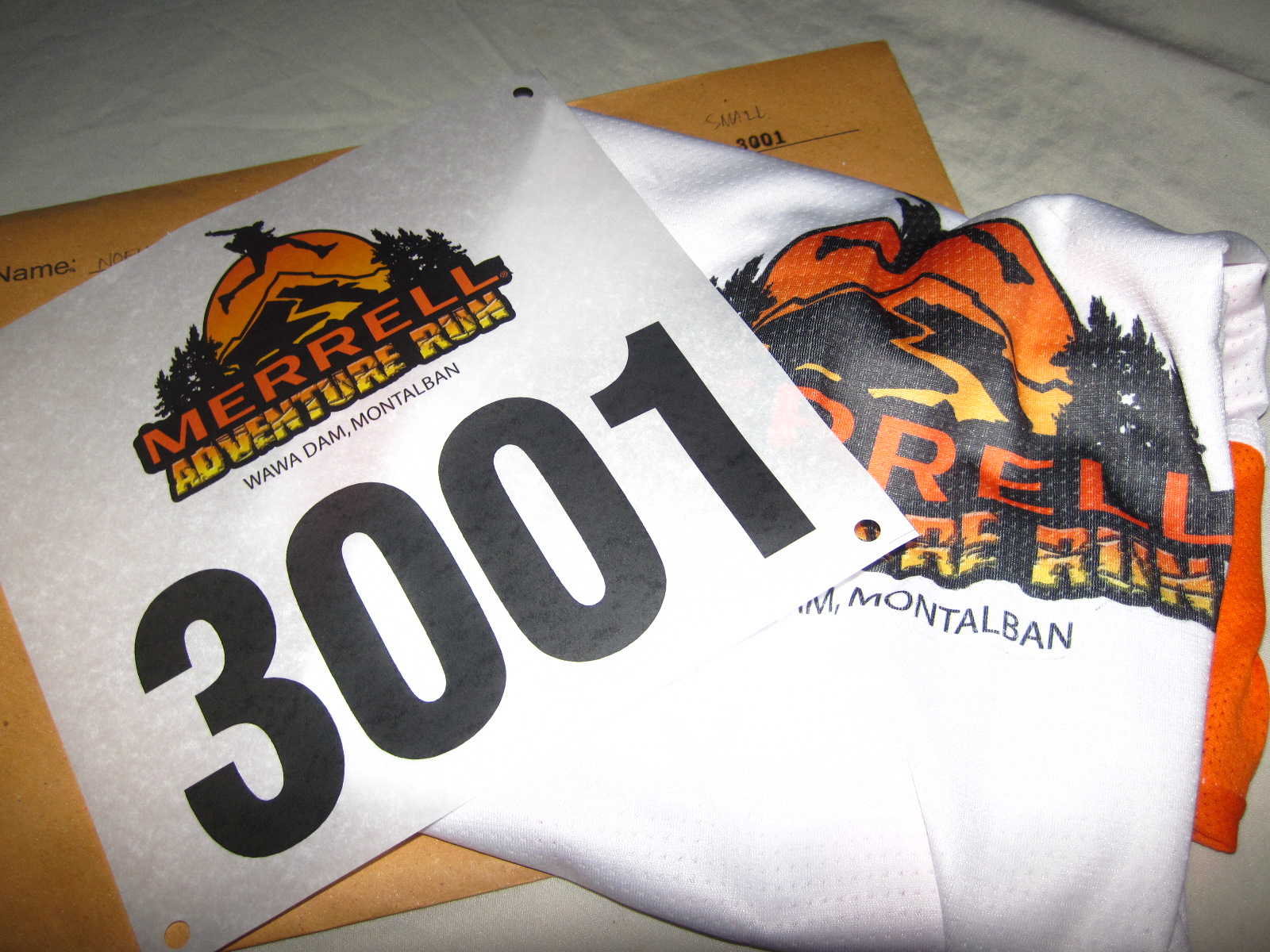 After missing out on TNF Nuvali, I was really looking forward to the Merrell Adventure Run held last Saturday, April 17, at Wawa Dam in Montalban, Rizal. It would be my first trail run, and thanks to A&F Magazine and Runnerspeak I had a free 3K race kit and pair of Merrell Waterpro trail shoes. As race director Thumbie Remigio said in my Runnerspeak interview with him, trail running is very different from running in the streets. The terrain would be varied and surfaces would be unstable, unlike unmovable concrete and asphalt. I figured to ease myself into this whole trail running thing it would be advisable to choose the shortest distance offered at the event. (There were also 5K and 15K distances.)

Not if you get lost.

On the Wrong Track

When the gun for the 3K went off, I was leading the pack with a male runner. I kept checking Kiko for pace and distance updates. At the 1.5-kilometer mark, all was well. I was handed a loop cord, so I thought I was nearing the end of my run. “Podium! Podium!” I thought. Aside from that, if I made it back to the finish line before 40 minutes were up, I’d get a finisher’s medal too.

And then it all came tumbling down. I figure it’s because my bib number was printed with black ink (for 5K runners) instead of blue ink (designating 3K runners). Or maybe the marshals just didn’t know what they were doing. Or maybe even the route markers weren’t placed where our eyes could see them — low to the ground since we were also keeping our eyes on where our feet were going. Whatever reason there might have been, instead of pointing me through to the next stage of my 3K trail run, the marshals put me on the 5K trail leading up, up, up a mountain and through some very narrow ledges where all I could do was follow the person ahead of me and hope I didn’t get lost.

But I already was. I checked Kiko and was aghast to see that I’d already traveled more than 3 kilometers — and the end was nowhere in sight! Finally, I found a marshal and started screaming at him that I was on the wrong trail, I was supposed to be running only the 3K, and that I didn’t want to continue going on the trail they were pointing me to. If I hadn’t started freaking out, the marshal would have pointed me onwards to the 15K route!

I was waved in the general direction of where the finish line should be. There were other runners in front of me, so at least I knew I was heading somewhere race-related. My feet, in their Merrell shoes, slogged through all kinds of surfaces: slippery slopes, jagged rocks, knee-deep streams, and sandy shores. I just knew I had to keep going.

And then finally I emerged back onto paved road, and I saw the finish line looming ahead. But before I could sprint through it, the marshals were waving me down onto a dry rocky riverbed for the “last 1K”. What the hell?! If it wasn’t bad enough I’d been pointed through the wrong trail and had run more than twice the planned distance (Kiko had registered 7K so far), I still had to stumble over a kilometer’s worth of hardship? It was more than I could bear, but I had to.

Gritting my teeth, clambering hand and foot, and finally pushing my wearied legs on the last 10 meters, I ran past the finish line with more than 1 hour and 30 minutes on the clock. Kiko had logged about 8 kilometers, but had been stopping and starting the whole time (it paused every time I went very slowly) so I estimate I actually did 9 kilometers total.

I was tired, wet, and upset. I had to sit down in a corner and cry all the negative feelings out. I’d run three times the planned distance, had missed out on a podium finish and a finisher’s medal, and had experienced the highest stress levels I’d ever encountered during a race. But at least I wasn’t alone; many of the runners I talked to afterwards said they’d gotten lost as well.

If there was one thing I was thankful for the whole time, it would be the shoes. They were stable and grippy, helping me hop, skip, and jump like a mountain goat through the course. Even though they were submerged in water six times, they never became water-logged and squishy. And after three hours in the sun, they were dry enough to use again.

I give this race TWO KIKAY PINKIE FINGERS out of FIVE — but that’s because I’m kikay and I hate getting all messed up. At least I made it back to the finish line in one piece (albeit a bedraggled one piece). But I still haven’t run a real 3K race!

10 thoughts on “Merrell Adventure Run: On the Rugged (and Lost) Side”