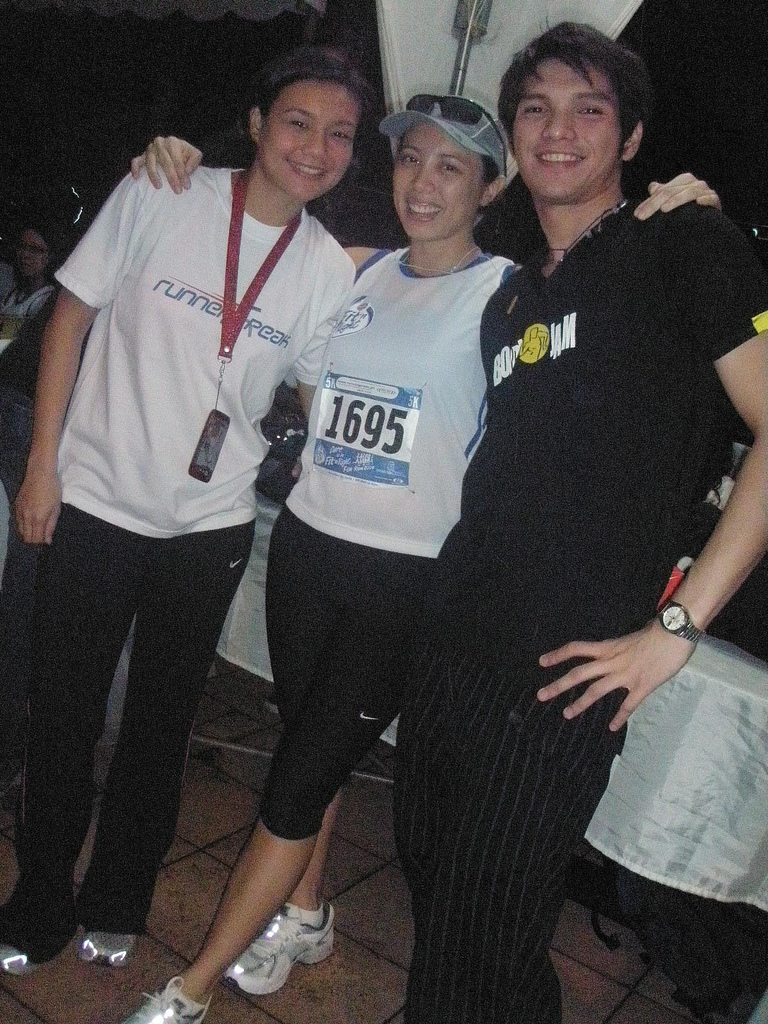 After the PIM 10K, which was held on Roxas Boulevard, my next race took me even further southwards, to the Mall Of Asia complex. My running friends and I signed up for the Del Monte Fit ‘n’ Right Fun Run after our PIM stint because we really enjoyed the camaraderie, the photos, and the eating after our run, and we wanted an event to cap off our year. At 300 pesos per entry, we thought it was a good deal for a singlet, a bib number, and a Radio Frequency ID sticker that would serve as a timing chip. Then my family, my sister, and her fiance joined in the fun as well.

After some trouble claiming the race kits (according to race organizer CEMG, the singlet supplier was late on deliveries), I finally got them the Friday before the race, except for mine. Good thing I called the CEMG office (particularly the point person Marianne Tapales) and was told they’d deliver my singlet to my doorstep. Ü

On the morning of November 22, My family and I arrived at 4:30am, the assembly time. However, when we got there, the arch hadn’t been built yet and the booths were still being set up (ahhh, assemble-y time). When we went to look for portalets, there were only eight of them — four for men, and four for women. I was thankful I was only going to run 5K, and purposely held back on hydrating myself too much before the race to avoid a Tatakbo Ka Ba running-with-a-full-bladder scenario.

I bumped into some of my co-instructors from Fitness First, and both of them were there not to run, but to perform in the race’s program. Joanne Ignacio, as last year’s winner of the Fit ‘n’ Right reality show, was one of the hosts, while Andre Sunga would lead the race participants in the warm-up. Well, Andre tried to lead the participants in the warm-up (part of the program that began really late), but not everyone in the crowd were dancers (he used a modified BODYJAM warm-up). There was also poor crowd control because the 10K, 5K, and 3K runners had not been segregated. As a result, when the gun fired for 10K start, the warm-up was still ongoing and some 10K runners were unaware that their event had started.

We 5K runners moved to the front of the line, but even then there was no real countdown to the starting gun. All of a sudden everyone was running, and I wove through the slower runners to get ahead. This was when I started to enjoy my run. The route was flat, the air crisp and cool, and I was able to get my first (and only) cup of water from the hydration table. I noted that it was a short table, and true enough, from the horror stories of people post-race, there were hydration problems. The 5K and 10K routes were the same (10K runners would do two laps), and by the time the 10K runners were on their second lap, the tables were out of water.

I finished the race with a time of 24 minutes and 7 seconds, a new 5K PR for me (even beating my Race for Life time), and then waited for my friends to come through the finish chutes. I was able to stand really close to the finish line because none of the marshals were making me leave. I found out post-race that the bib checkers were crowded out by participants waiting for their friends, and this caused problems in verifying which bib numbers had crossed in what order.

The Del Monte freebie booth by that time was handing out huge sackfuls of Del Monte products, but it was located very near the finish. People standing in line were blocking the way of runners. There was a general air of frenzy in the place, and there were no safeguards to determine who had already claimed their loot bag. As a result, when our turn came, there were no more goodies. Well, at least we still had each other. Ü I had fun with my friends, but it was only after the race that the sad faces set in. I had a hiccup with the RFID timing chip when I was recorded as coming in 3 minutes later than my actual finish time. I thought that was the biggest problem, but then I didn’t know how bad other participants’ experiences were until I checked out the comments on the Fit ‘n’ Right fan page on Facebook. Ouch!

Del Monte was quick to offer an apology and to accept responsibility.

From my point of view, CEMG, being a first-time race organizer, had miscalculated the logistics needed for the number of participants who had signed up — water, portalets, marshals, and grounds set-up. I do think they’ll learn from their mistakes, and I appreciate the way they handled the backlash — with an apologetic attitude and a promise to do better. I think they just might have bitten off more than they could chew with a big product race such as Del Monte’s (which received a lot of promotion in the tri-media). Perhaps they should have gained experience first with smaller events, like company runs with a lower number of participants.

Hopefully, next year’s Fit ‘n’ Right run will be a lot smoother. Ü Which reminds me — I can still claim my loot bag at CEMG this week.