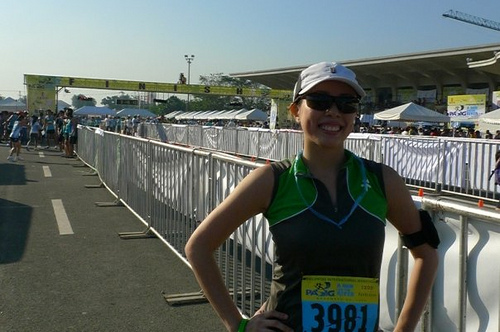 For my last 10-kilometer race of the year, I ran at the Philippine International Marathon held on Roxas Boulevard on November 8. at the finish line

My dad dropped me off at the assembly area at Quirino Grandstand around 4:30am. The marathon runners had just started, and the roads surrounding the area were already blocked off. It took some effort to find everyone else I was running with, particularly Lalah, who had picked up my race kit for me. By the time we had all gotten together, I didn’t feel like switching my Race for Life top for the blue Izod singlet that all the other runners were wearing. (Hey, I like standing out.)

I was running the 10K distance with Joel, while the rest of the gang had signed up for 5K. Joel insisted we place ourselves near the front of the pack since I was attempting a new PR. I’d seen the route on Google Maps a few days before and knew that it would be a flat course for most of the way, excluding one flyover. This was the route used by the Milo race earlier this year (before I started running), so Joel warned me about certain smells I would encounter along Roxas Boulevard.

Former president Fidel Ramos fired the gun, and we were off. Some Marines and Coast Guard men were among us, and I found a group among them I could comfortably keep pace with. Everything about my run felt good; I wasn’t taking it easy like I did KOTR, but I wasn’t pushing myself too soon yet. I took notice of landmarks so I would know when to start pushing myself to sprint pace on my way back.

The water and hydration stations were wonderful. Water and energy drinks were there when I needed them, so I never felt like I was going to run out of “gas”. After every drink break, I was able to speed up just a bit more.

Then I hit the wall of stench: a smell of rotten eggs was emanating from stagnant water trapped between Roxas Boulevard and the reclaimed area in Manila Bay. I coughed, waved my hands in front of my nose to fan the smell away, but the only way I could escape the smell was to run faster. So I did.

When I got to the flyover, I leaned into the incline and drove my legs down to push my body up and over the crest. Then I sped up my footstrikes going downhill, gaining much-needed time. The U-turn point came pretty quickly.

I thought the home stretch would be the easier part since I still had a lot of leftover energy (I was unwittingly doing a negative split, where the latter half of the run would be done faster). I had no idea that the slow-moving molasses masses of people participating in 3K and 5K would block our way. All runners had been directed to U-turn onto the other side of Roxas Boulevard, so imagine trying to speed up when there are 20,000 people standing in your way. There were people strolling along like they were walking in Luneta Park (which was beside the race’s starting line), students horsing around, unmindful of serious runners like us who were hurtling towards them, girls moving against the flow because they were looking for their friends, and a woman who crossed the street while texting. I yelled at her, “NO TEXTING WHILE DRIVING!” as I sped by.

(I should have followed the other 10K runners who were on the other side of the street, counterflowing against the few stragglers who had started their 3K and 5K late. That’s what Gingerbread Runner Luis did, and he was able to finish under 50 minutes.)

A race marshal was pointing the way to the 10K finish chute with a placard, but he was facing the wrong way so I got shunted away with 5K runners. I had to vault a steel barrier to get back in position. Then I saw the clock at the finish line: 50:46. I went nuts, screaming “What? WHAT?!” in disbelief as I sprinted towards it. I felt another runner closing the gap behind me, and launched my body forward over the mat into the finish chute before he could overtake me. HAHAHA

For a run that I entered at the last minute, I did surprisingly well — I set a new PR of 51 minutes, 15 seconds (unofficial). Maybe it was my new cropped running tights and socks. Maybe (most probably) it was being well-rested and well-nourished the night before. Maybe it was the novelty of running a new route. I just remember thanking God for giving me a great way to finish my running year.

Well, it’s not over yet. I still have the Del Monte Dare to Be Fit ‘n’ Right Run this Sunday. I’m running it with the same group of friends I went to PIM with — they got hooked on running too! Ü

One thought on “Philippine International Marathon”

Indoor rides aren't scenic, but they do the job OK