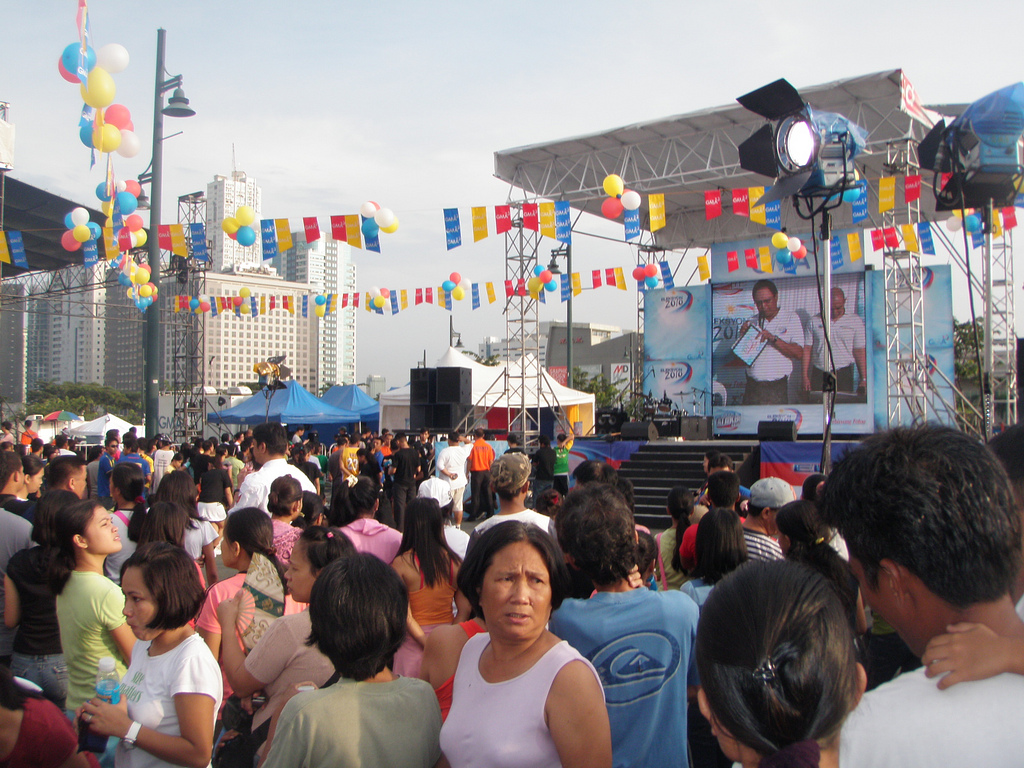 Back in high school I was a vice-presidential candidate for the student council. It was miting de avance day and we’d gone off to the nearby park to practice our speeches during the lunch break. We ended late and had to race back to school a few minutes before the bell rang. As we ran, I quipped, “So this is running for election!”

Thirteen years later, I found myself joining a race held to campaign for clean and honest national elections. I don’t really know why, as I have turned apolitical and cynical about the country’s politicians (with few exceptions). I think I must agree with Bald Runner, who just wanted to run fast. When I got to the venue at Fort Bonifacio, I realized this was not just another race. This was also a media event where celebrities from the sponsoring network (as well as politicians) would turn up, and this meant there were people in attendance just to see a famous person. Americans call them “rubberneckers”; Pinoys call them “mga usisero“. Whatever you call them, they filled up the venue to overflowing. It would have looked like a political rally had we not been wearing running attire.

I was at the assembly point by 5:15am, thinking that the gun would sound at 5:30am. Unfortunately for me, I had drunk about a liter of water, and my bladder was rapidly filling. By 6:00am I needed to pee badly, but couldn’t leave my position near the starting line as it would mean that when I came back from the portalet, I’d have to take a position at the back of the line — behind a few thousand runners and walkers. At least I’d only be running 5 kilometers, I reasoned. I could hold it.

Big mistake. As soon as the gun fired at 6:30am and all 5K and 10K runners set out simultaneously, I found my brain divided on whether I should keep running the course, or take a little detour into some bushes and tall weeds to relieve myself.

It didn’t help that a large part of the 5K route was held on a two-lane winding road where there was barely enough room to pass slow runners. It got even worse as I made my way back past the halfway u-turn. Runners who were still on their first half crowded into my lane to get to the water station and I had to slow down to a walk to avoid nasty collisions. Then I had to scream at people to get back on their side of the road because I didn’t want to fall into the ditch at the edge of my lane.

I had hit my wall; it was a lonely run and I really felt it was me against the world. Then a guy in a yellow iamninoy singlet began to pace beside me, and for the next half-kilometer I didn’t feel so alone. He ran past me at the 4K mark.

Finally, I found my second wind, enough to make a final push for the finish line. As I picked up my pace, I spotted Mr. iamninoy walking, out of breath. I ran up to him, clapped my hands and said, “Come on! Come on!” I saw determination flash in his eyes as he started running again, waving his arms in the air.

The final bend before the finish line was crowded by bystanders, photographers, and a TV crew on a platform. I was sprinting. I blew a kiss at the guy trying to hand me a Vitwater and grinned at the TV camera. People were clapping, not just for me but for all the other runners. So, this must be what Heaven would be like, I thought, dizzy with adrenaline and euphoric at not having to pee in the bushes. LOL!

After I collected my giveaways, made a trip to the portalet, and gone back to my car to collect my camera, Mr. iamninoy and I crossed paths again. We slapped palms, and he said, “Good run.” I replied, “Good job.”

I waited for my friend Liz to finish her 10K, and as we took photos at the finish line, I found the Takbo.ph banner, and about a dozen people standing behind it for photos. I’m a member of the online community, so I didn’t want to miss this chance to be in the “class picture.” It surprised me that a few of them recognized me from my blog. I should order a Takbo.ph singlet Although I didn’t have the best run (I wanted to beat 25 minutes, but I took more than 26 minutes), I enjoyed the sense of community, of knowing we were all in it together.

I should pick my races more carefully next time, though. I wish the politicians had run either a 5K or a 10K rather than that silly sub-100meter Unity Walk. Then they might actually have gained some respect from the runners who had turned out for the race. As it turned out, the network used the large turnout to hype their popularity, and the politicians got publicity I don’t think they deserved.