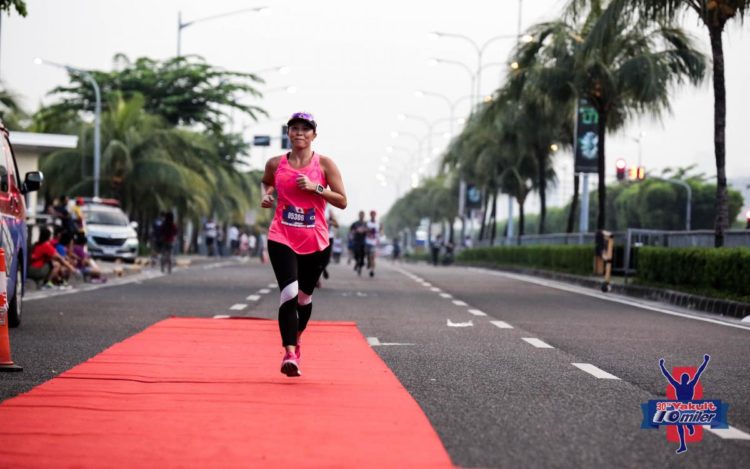 The single biggest reason why I’ve logged so many Did Not Start results at run races this year is that I’ve either been sick or too lazy to make the effort. Mostly it’s been “trying not to get sick” rather than being full-on sick, so I farmed out the complimentary kits received from race organizers to friends and teammates who were more willing to race than I.

But on Saturday afternoon, my race kit for the 5K at the Yakult 10-Miler arrived. It just so happened I had signed on for the 5K Run Challenge on Strava, which required me to run a 5K outdoors to earn a badge. I figured it would be a great way to get that 5K run under my belt, and I didn’t want to waste yet another race kit.

I asked myself, what was I really hoping to get out of this aside from the Strava badge? Maybe I could make it a benchmark run workout. While I’ve done several race-pace runs at the tail end of the multisport races I’ve joined, I haven’t been hitting the paces I expect from myself. I also wanted to see how fast I could run on fresh legs (not bike-fatigued ones).

So yeah, come Sunday morning I rolled out of bed at 3am, ate a light breakfast, and headed to the SM by the Bay North Fountain at the Mall of Asia complex. I was pleasantly surprised to see so many run community stalwarts at the 5K starting line, particularly the Powerpuff Boys (and Girls) who I later had breakfast with. They asked me what my target time was, and I said anything under 27 minutes for the 5K would make me happy.

Off went the gun.

Challenge #1: Get ahead of the “rabbits”.

You’ve seen these people at every single race: they’re the ones who put themselves at the very front, run hard for the first 200 meters, and then gasp for breath and slow to a walk. (Not to stereotype, but they may also carry face towels and fans…) The problem with getting stuck behind these kinds of race participants is their starting surge can mess with how you intend to run the opening kilometers, making you go too fast or too slow.

Because there was a U-turn right at the 100-meter mark to get out of the start chute, I made it a point to sprint for 20 meters and get out in front so I could get some open road ahead of me before I settled into my own pace. At the same time, I had to keep my pace controlled so I didn’t end up roasting my legs too soon.

It was nice to exercise these run race tactics again, since I don’t usually get a chance to start in a big run pack in a triathlon. (I’m always the one trying to catch up…)

Challenge #2: Catch up to the leading female.

Once I’d put the more casual runners behind me, it was time to focus on the road ahead. And what did I see up there, about 300 meters ahead? The leading female with a motorcycle escorting her. I had a little less than five kilometers to get up onto her shoulder — could I do that running at my current pace?

Many times runners think they need to put on a big surge right away, when in actuality you can still catch runners out in front by running just slightly faster than them. I eyeballed the distance between us, and noted that it was shrinking even if I wasn’t speeding up. Just needed to bide my time and not run out of road…

…And I finally took the lead at the 2.5 kilometer mark. Now all I had to do was hold on for the next 2.5 kilometers, right? I put on a little surge to see if she’d come with me, but no response. The funny thing is, the motorcycle escort didn’t realize I was the new leader. They probably assumed I was in one of the longer categories.

Challenge #3: Hang on when you realize the distance is longer than advertised.

I didn’t start out with the goal of negative-splitting, so naturally my pace started slowing down in the back half of the race. I was running a bit more comfortably, I couldn’t hear or see anybody coming up from behind me, so now my goal was just to finish 5K in under 27 minutes. Easy, right?

Well, the 5K mark came and went on my Garmin (did it in 25:43!) and I was still some distance from the finish line. I ended up crossing the finish line in 30 minutes and 8 seconds. The recorded distance was 5.8 kilometers, which was nearly another kilometer extra!

I didn’t initially set out to win the 5K category, but I went for it when I realized it was within my reach while still hitting my initial time goal. (Also I think the lack of a cash prize diluted the competition somewhat: the strong runners were off in Cavite doing a local run where the top 20 finishers got P1,000 each. But you can only race whoever shows up, right?)

Congratulations to all the participants, organizer Proactive Sports Management, and Yakult on holding the 30th Yakult 10-Miler, one of the OG races in Manila. Hopefully next year I can do one of the longer distances again!