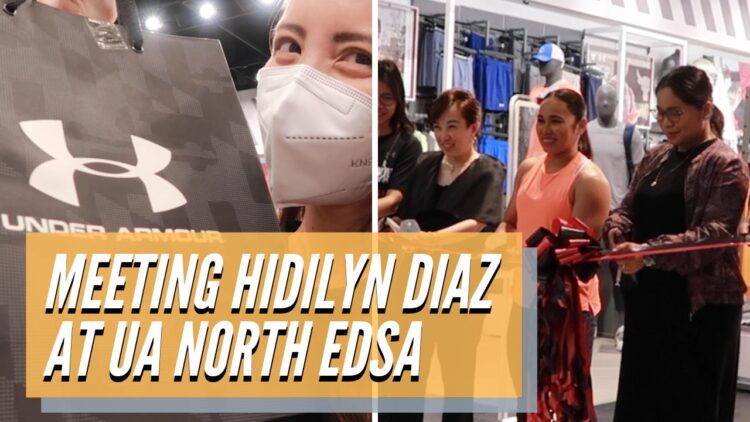 I’m back! Today I’d like to share with you my visit to the new Under Armour brand house at SM North EDSA, and the few snippets of wisdom I learned from Hidilyn Diaz, the first Filipino Olympic gold medalist and newly-signed brand ambassador for Under Armour.

“As a woman it’s a big deal for me that women are celebrated, because at the Olympics we showed that women can be strong,” Hidilyn said in Filipino. “I hope we don’t stop. Because many will say, ‘You’re a woman; you should stay home. You’re a woman; you don’t belong in that sport.’ I’ve also encountered those situations. Let’s not listen to what they say that we can’t be here. But let’s do this because we want to, because we enjoy what we’re doing… Let’s not let anyone tell us what to do, but let’s do what we want to do.”

The Under Armour SM North EDSA store featured different collections such as Project Rock, the new Curry basketball shoes, and myriad apparel and footwear for sports and active lifestyles. Particularly for runners, there are some items that are currently only available at the North EDSA branch.

Check out my vlog of the store visit below:

After a few months of totally focusing on moving into my new house and not exercising regularly, I felt so inspired listening to Hidilyn that I immediately started planning my run training again — and nothing motivates me more than training in new gear that can match some of my older collection. So I picked up a new running tank top and shorts and partnered them with my Under Armour Flow Velociti Wind, which are still going strong even after a year. (Incidentally, the Flow Velociti Wind 2 is much lighter!)