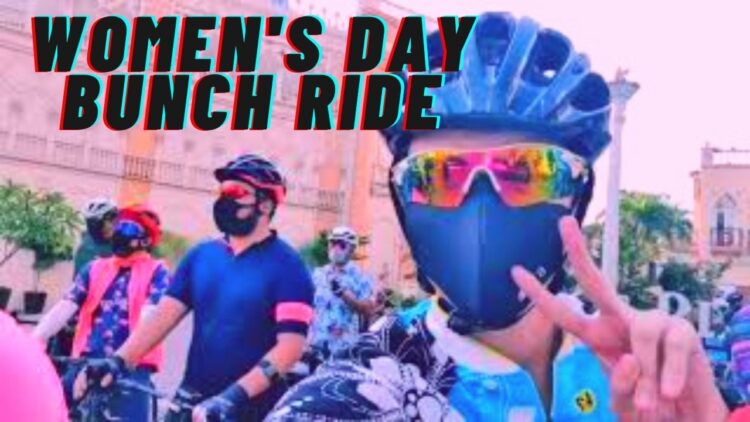 However, all bikes need maintenance so I finally hauled my pink Ceepo Mamba to Bikes & Coffee which recently opened at Uptown Parade in Bonifacio Global City. I was able to book in for an advanced tune-up for Thursday using the “Text” function on their Instagram account. (I don’t like doing walk-ins anymore anywhere for services because you never know if a place is unable to accommodate you.)

When serendipity strikes… It just so happened that Dale of Colnago Manila was also at the store. We’d met briefly at the GFNY Iloilo launch two years ago, but it was nice of him to say hello and tell me about the International Women’s Day “bunchy ride” happening. An event by Cyclism Manila and Black Sheep Cycling, it was set to jump off from Bikes & Coffee on Sunday. Would I be interested?

What better way to baptise my newly-replaced chain and freshly-tuned bike than to ride outdoors for the first time in 13 months? One week before the anniversary of community quarantine beginning in the country, I found myself up early on a Sunday morning kitted out for an easy 20-kilometer ride.

Watch my short vlog below:

Apart from some jitters in the first few kilometers as I “found my cycling legs” and reawakened my road sense and handling skills, I felt quite at home in the bunch. The pace was also very easy and allowed me to chat with a few folks as we rode along.

The only thing that felt alien to me was wearing a mask while cycling. I’m still trying to wrap my head around pulling it up and down when drinking from a bottle. Thank God for the photo stops we took along the way so I could have a sip!

I really tried not to make a nuisance of my triathlete self, even removing my aero bars so as not to offend the pure cyclists, lol. Nearly got away with it too, but I have a confession to make: I put my rear road tire on the bike the night before the ride, replacing the trainer tire that’s usually on it. The ride itself was uneventful. I already had made it all the way home and was putting my bike in its usual place when the tube started hissing. It’s a wonder it didn’t blow up during the ride — the tube was full of tiny aneurysms just waiting to pop. :/

(Anyway if it had sprung a leak during the ride, I was ready with a spare tube and inflator.)

That leisurely ride reminded me of one of the things I’ve been missing in cycling: that sensation of slicing through the air as I freewheel on a smooth road. Indoors is efficient and safe, but it definitely can’t replace cycling outdoors.

Anyway, do check out Bikes & Coffee for some great bike service, food, and coffee, and Cyclism Manila for fash finds and group rides.