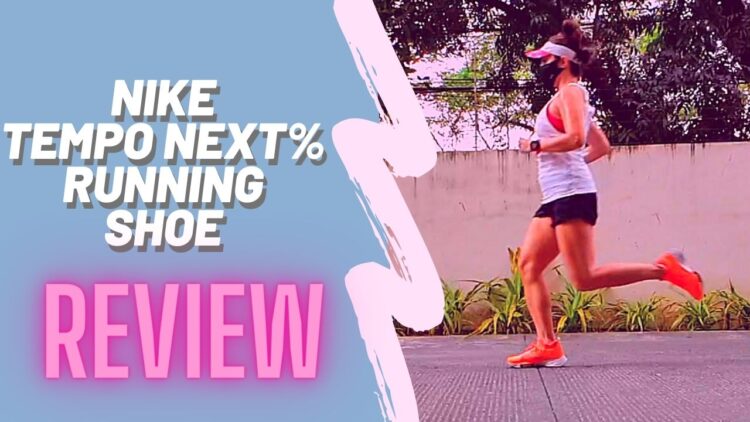 I’ve been running in the Nike Air Zoom Tempo NEXT% shoe for a month now, and so far my experience has been exactly what my first impression indicated it would be: that the Tempo NEXT% is a pretty awesome shoe that delivers on its technology’s claims.

(Head to my Nike Tempo NEXT% First Impressions post and vlog for the technical specs and other useful information.)

But apparently I had a lot more to say in this follow-up review. You can watch below, or keep scrolling for some key points.

I thought it was just my perception, but it’s shown in my Garmin data that in the Tempo NEXT%, I was running at lower exertion (heart rate and perceived exertion) while still hitting some fast times.

I also thought that it would benefit someone with a more bounding style versus my own shuffling, due to the spring of the composite plate and the dual Zoom Air pods in the forefoot. But looking at my data, I ran at similar cadences and stride lengths while wearing the Tempo NEXT% and a comparison shoe (I had a marginally faster cadence in the Tempo).

I mentioned in my first impressions that it felt like the shoe would want a faster pace to feel comfortable. However, having run slow and steady as well as sharp and fast in them, I would say that it handles very well in either instance. While the midfoot cushioning does encourage and reward landing on the midfoot, it doesn’t feel harsh slowing down and landing further toward the rear of the foot.

When I run fast, I naturally feel a bit more beaten up the next day due to my body absorbing greater impact forces due to intensity. But running fast in the Tempo NEXT% doesn’t come with that penalty of soreness the next day. You really feel the ZoomX and React foams coming through in their promise of cushion as well as energy return.

These are the tallest shoes I’ve worn in a while, at a whopping 42mm. You definitely sacrifice the feel of being low and stable to the ground, and I found myself taking the corners more gingerly than I would with a thinner-soled shoe. Given the feeling of potentially yanking my ankle to either side as well as the fragility of Zoom Air chambers versus full foam cushioning, I would recommend using these on well-paved, well-lit, familiar roads.

The laces are somewhat just for show, or to lock the foot down even further. But you can’t loosen the shoe completely, since the upper is built in one piece (no tongue) just with additional stretch built into the top part of the foot over the arch. I don’t have high arches but could still feel the shoe constricting the top of my foot. And that could be a problem when feet start to swell during long-distance running.

I like the Nike Air Zoom Tempo NEXT% even more now than I did during that first impressions run. In fact, I’m wondering what it and I could achieve during an actual race. Hopefully, the shoe lasts long enough for me to find out.