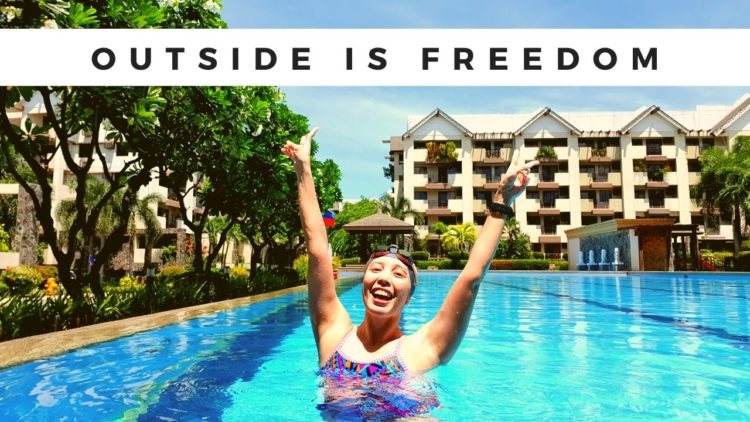 I’m going to ask for your forgiveness in advance for my rambling in writing. I’ve had to do a lot of work the past week and don’t really have energy to get in front of the camera to vlog, but I always try to write as I speak: from the heart.

Last week was the first time in nearly three months that I was finally able to look at the swimming pool in our condo complex and not think: “I can’t swim in there just yet.” We were allowed back into the pool subject to scheduling and crowding restrictions, and for the first time things felt like normal again. I joked that my time at the pool is the only time I’m allowed to be outside without a mask on, but it’s actually true especially since we have to bike and run wearing masks outside.

I think back to my childhood and how being outside was a break from the grudge work of school: recess and lunch were spent at the playground and I could still swing from monkey bars. I would spend a few hours after school on a disused soccer field nearby playing with friends, whether these were organized sports like volleyball or making-believe we were explorers or spies.

And then I grew up and packed all that being outside away, trading it in for the four walls of university and then an office. Even exercise became something I did inside a building, at gym facilities.

I started running back in 2009 to get away from being inside, and had some of my best results when I was running outdoors on varied terrain. Then my work and life schedule changed and I couldn’t get out to run in the mornings or evenings anymore, so I took it back into the gym.

I took being outdoors for granted. And then this pandemic hit and we all got squared away.

Freedoms should be cherished and not given up easily, so we stayed home so that we could buy time for our health care system and our government to beef up their abilities to trace, isolate, and treat this disease called COVID-19. (Unfortunately the government just used this time to accomplish its stranglehold on power and quash dissent, but just ask me about that in person because I don’t feel like writing about it.)

We’ve been told once there is an effective vaccine we can go back to how we used to do sport and engage in physical and social activities. But what if there isn’t a vaccine? I’m reminded of this article I read about mass participation events moving forward and how endurance sport has begun to adapt.

“…people are getting back on the road, back out into the freedom of the real world with more enthusiasm and without question a greater appreciation for life’s little luxuries. [Virtual racing has] been a nice complimentary piece for during the lockdown, but it’s definitely not fully meeting what people’s desire is and why people are drawn to sport, which is: to get out from those four walls, smell the fresh air, get the feeling of freedom and training and challenging yourself. Racing becomes a big part of that.” – Chris McCormack

I’m certainly not in any rush to get back to racing. I’m happy my involvement in endurance sport has turned largely inward, more for my own fitness and wellbeing rather than competing with others and proving myself. That being said, I do miss the social aspect, of getting together with friends and pushing one another on. But doing that now is all dependent on your appetite for risk.

As human beings we are social creatures who take shelter in our homes but otherwise for centuries have spent our time outdoors to hunt, gather, farm, and socialize. There’s a reason imprisonment and solitary confinement is considered punishment. That’s why being outdoors after such a long time of staying in feels so freeing.

Of course, my freedom ends where it infringes on another person’s freedom, so I will do my best to keep masked and give other people space (so that virus never gets the chance to jump from host to host!). But otherwise, being outside is freedom, and I’m going to keep exercising that freedom as much as I can.