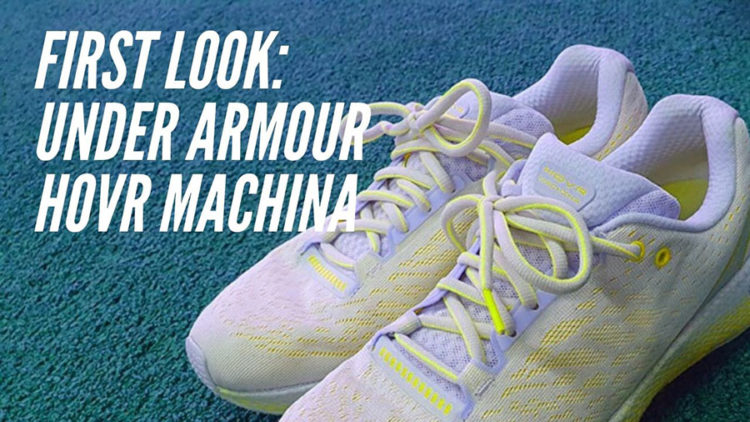 Last Thursday, Under Armour invited yours truly and a bunch of other running enthusiasts to their launch of the Under Armour HOVR Machina. The latest model to feature a HOVR cushioning midsole, the UA HOVR Machina is supposed to be the perfect balance between a high-cushion training shoe and a lightweight racing shoe.

The Machina is the first to feature a new partially uncaged UA HOVR midsole: the cage supports underneath the midsole while the sides are bare HOVR. This slashes the weight considerably, despite the Machina featuring 20% more HOVR cushioning than the HOVR Infinite. It also features a two-pronged carbon-filled Pebax propulsion plate that helps the foot transition faster from landing to toe-off.

The UA HOVR Machina weighs 283 grams (10 oz) for men’s size 9 and 241 grams (8.5 oz) for women’s size 7. (These are actually just a few grams heavier than one of the shoes I’ve recently reviewed.) In hand, it definitely felt solid. On feet, the cushioned yet breathable mesh upper along with the removable insole made it very comfortable to walk around in.

Under Armour’s pop-up booth for the launch also featured other HOVR models: the Sonic 3, the Infinite 2, Velociti 3, and Phantom RN for neutral runners, and the Guardian 2 for those who need added stability. 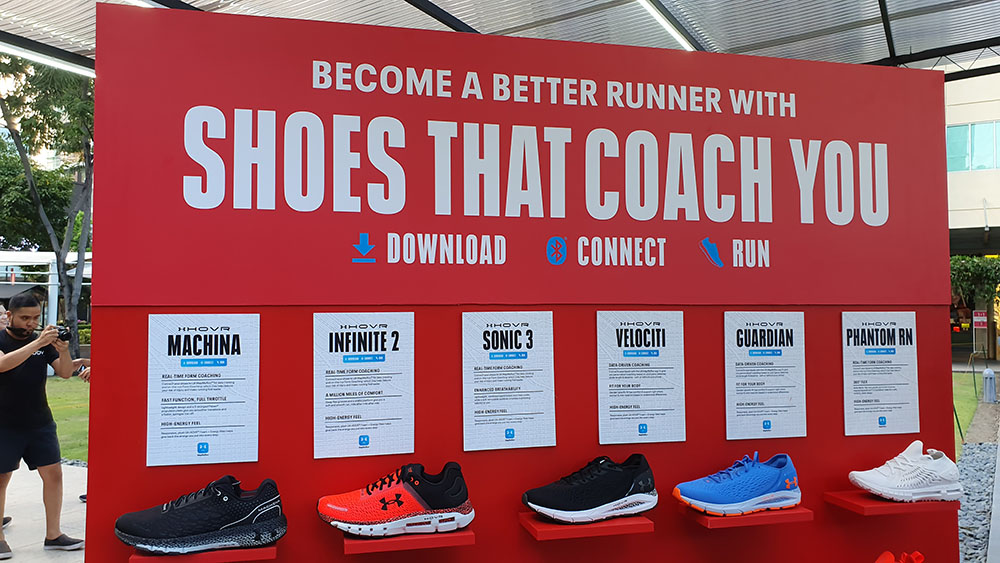 Aside from all featuring HOVR midsoles, these shoes are part of Under Armour’s Connected series of shoes which contain Bluetooth pods embedded in the soles that track steps, cadence, footstrike, ground contact time, and more. Given Under Armour’s acquisition of MapMyRun a number of years ago, it was only a matter of time before all their running shoes shunted you towards using the MapMyRun app to track your runs.

The friendly folks from the Under Armour Run Crew helped me set up my shoe with the MapMyRun app, which was simple enough. I ran with the shoes that weekend and picked up some achievement badges, as well as got to take a look at the kind of metrics the shoes picked up and the app analysed.

My first impression of the UA HOVR Machina is pretty favorable. Just the comfort factor I mentioned previously make these great to walk around in on a grocery or mall errand. When I started running in them, I felt good.

After Under Armour stopped producing Speedform Apollo models I was devastated, and none of the succeeding models they came out with sat right on my feet. While these are definitely a different shoe versus the Apollo, they captured the same kind of magic I experienced when I fell in love with my first pair of Under Armour shoes.

I will be running in these over the next few weeks, and have already started comparing the feel of the HOVR cushioning versus other shoe brands’ proprietary midsole technologies so that when I come out with the full review next month on my vlog I can say more than just “these are fun to run in”.

In the meantime, check out some more of my pictures of the Under Armour HOVR Machina (showing some dirt after two uses):