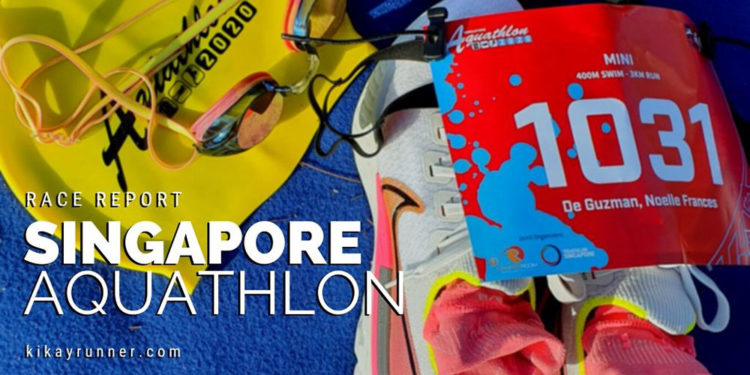 It started out as an idle idea pitched by an athlete who had come second to me at both the Aquaman Aquathlon and the Yakult Run 5K. Geline had never raced internationally by herself and was looking for someone to come with her to the Singapore Aquathlon. I thought it would be a good way to kick off 2020 and my blog’s 10th anniversary. Also, since the organizer was a friend and I’d never done one of his races overseas, it would be like hitting two birds with one stone.

Well, that was back in October. Enter the week of January 19, 2020 and I’d only started swimming and running the week prior. Thankfully, I’d had the sense to register in the Mini distance only (400-meter swim, three-kilometer run) so it was definitely survivable on such limited training.

Thinking back on it now, I’ve never done a race in Singapore that had a morning start. Both the Star Wars Run 10K and the Singapore Marathon 21K were afternoon starts. Morning starts in Singapore are pretty late relative to my body clock — and the Mini distance aquathlon had a gun start of 9:05am! Of course, we had to show up before Geline’s sprint aquathlon gunstart at 8:30am, but it was still late enough that I managed to get a full eight hours of sleep, have a light breakfast, and then take a 10-minute Grab car ride to the race venue at East Coast Park Casuarina Grove with an entire 90 minutes to spare ’til my start.

After sending Geline off, I set up my transition with the Nike React Infinity Run shoes I’m testing, Kalenji socks, Ceepo visor, Salice sunglasses, and race belt with bib number. (I’d forgotten to pack my own, but thankfully the race pack included a free belt!) I chatted for a bit with Elvin and Joseph, my friends from the race organizers Orange Room, which definitely helped take my mind off the pre-race nerves.

And then I had some time to myself to set some goals and parameters for the race:

This race would set my fitness baseline for the season. From there, there would be no way to go but up. And so off I went into the waters of the Singapore Strait for two laps of the 100-meter course, followed by a run through transition and onto quite a short run.

I actually felt pretty average in the water and flipped over onto my back a few times, as the race pace I was accustomed to was quite a bit above my current swim fitness. I took some time in transition to calm my racing heart, but I was soon red-lining again as I ran. The shoes were pretty comfortable to run in, but I didn’t know if they were holding me back or if I was just actually sh*t on the day. (My bet is on the latter.) In any case, I still was able to run a sub-6 minute pace to finish as 8th overall female since there were no age categories for the Mini distance.

After some rest back at the hotel, I decided to take Geline on a tour of my favorite spots in Singapore. Luckily, it was also the last weekend of the Light to Night Festival 2020, so admission to the National Gallery was free! Here are some photos (of myself, because Geline’s camera-shy).

Last year I started my racing in Singapore as well, but I had more lead time to prepare and thus enjoyed myself more. January’s really just a bit too early to be racing, and so lesson learned. In any case it was nice to pop over into one of my favorite cities for the weekend and celebrate my blog’s 10th anniversary in advance.