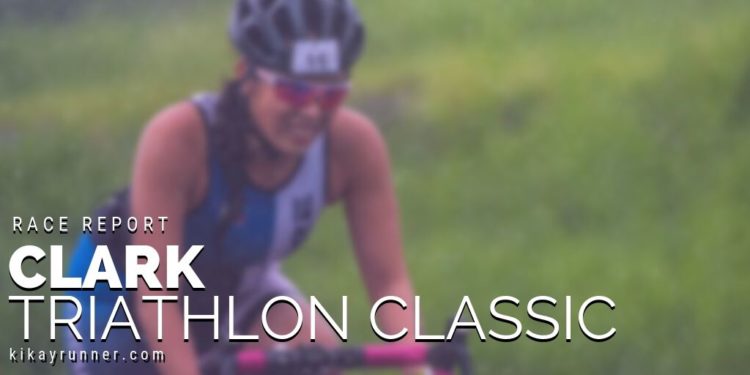 Last Sunday’s Clark Triathlon Classic was my longest race yet this year with a 700-meter swim, 40-kilometer bike, and 7-kilometer run.

I’ve been thinking of this race with some trepidation, feeling horribly under-prepared because I hadn’t ridden 40 kilometers in one go and I’d skipped my planned 10-kilometer run at Milo Marathon Subic. So, instead of spiraling into self-doubt the night before the race, I had some good food and set goals that had nothing to do with how fast I wanted to go. Instead, I focused on consistency, mental fortitude, and perceived exertion.

My past three triathlons have all been held in Clark, with the swim at Fontana’s 50-meter pool. This pool is only four feet deep, so it should hold no terror. However, at Triman in July I couldn’t swim non-stop; I had mini panic attacks in the water and couldn’t catch my breath. I was going at an effort I couldn’t sustain, and also I was just psyching myself out for some reason.

Goal #1: swim the 14 laps (700 meters) non-stop, without flipping over to backstroke and breathe. This was made infinitely easier because it wasn’t a mass start, but a rolling wave start separating groups of four or five swimmers each by 15 seconds.

I found someone in my age group whose pace was similar to mine, and so I stuck to her. I managed to edge ahead of her by the last length and get into and out of transition faster.

It had been a drizzly morning, and the weather had not improved by the time I got on my bike. It actually got worse, as the drops grew bigger and rain started coming down in sheets.

Then my nemesis from the swim blew past me and into the horizon. She was going at a pace I could not keep up with (ended up with a bike time four minutes faster than mine), so I shut down my thoughts about her and instead concentrated on riding the course well.

I had to keep my wits about me because aside from the rain, I had to negotiate errant drivers and motorcyclists as well as male participants who would overtake me and then slow down. While this was a draft-legal race, I still had to avoid drafting behind male athletes (you can only draft behind athletes of the same sex), so it was frustrating having to brake to give myself enough space, or burn some matches to re-overtake them.

Unlike previous races here in Clark, the bike course for the Clark Triathlon Classic featured what locals call “Pader” or “the Wall”: a connector road from SCTEX running alongside the Sacobia River that features a 137-meter elevation gain over 10 kilometers. It’s not particularly steep, but it can take the sting out of your legs. The CTC route required it twice, and the last climb comes right before the 300-meter spin into transition. I knew that I would have to control my effort so I had enough left to run well. As the old adage says, “Bike for show, run for the dough.”

The rain had stopped by the time I rolled into transition, but the shirt I had covered my running shoes with was soaked through. Thankfully my shoes and socks were safe, so I was able to turn the pace up from the very start of the run.

Goal #3: run an even or negative split.

On this two-loop run course, I decided to run the first loop at a slightly uncomfortable perceived effort, but one I knew I could sustain. If I felt okay, I would push a little harder on the second loop. If I saw any female athlete in front of me, I would try to get ahead of her, use them as “rabbits” I could chase.

By this point I knew first place in my age group was out of reach, but I had to try anyway. I crossed the finish line without the fanfare of being first, but I was satisfied I had done all I physically and mentally could.

We were all ranked within our respective age groups but looking at the female field’s splits, I was second overall with the second-fastest swim, fifth-fastest bike, and fastest run. (Of course the runner in me took pride in that last one!)

It was nice to find out my consistent training on an MX Endurance Olympic-distance plan had prepared me for this long sprint distance. In retrospect I could probably have given more but just didn’t have the feel for it yet, so I’d played safe. (Better that than DNF-ing or blowing up spectacularly.)

Sometimes we build up obstacles in our own minds and get overwhelmed at the thought of finishing something so big. If we change mindset and think more about process rather than outcome, it breaks things down into more manageable chunks. “How do you eat an elephant? One bite at a time.”

I have some travel ahead of me over the next week, so I’ll take it as an opportunity to recover before getting back into training for my last triathlon of the season at the New Clark City Triathlon.