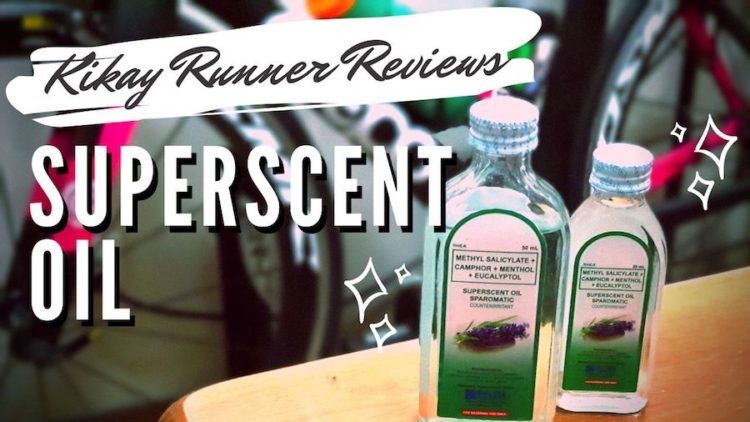 When I was a kid I always wondered why my grandparents kept a bottle of liniment in prominent position in their bedroom. So I had this notion that liniments were an old-person thing — until I became a runner and triathlete. But even then I tried toughing out the minor aches and pains, only resorting to liniments when I got really stiff and sore.

And then of course, Rhea Generics sent me like a year’s supply of their Superscent Oil.

This actually came at a really good time because I started putting in a lot more mileage (which bring the aches on) and then my mom got a stiff neck from moving wrong while dancing. I gave my mom shoulder and neck massages using Superscent Oil and her neck pain dissipated, and I slathered on some Superscent Oil myself post-race after the Duaman Duathlon. The scent itself is more peppermint than camphor (the generic is Methyl Salicylate + Camphor + Menthol + Eucalyptol) so it doesn’t have that classic “grandma smell.” The warming sensation is also mild compared to some similar products I’ve tried, so it’s great for people like me who don’t like their liniments too “spicy.”

All this is to say, I think I have come to terms with the fact that liniments are for active people as well. Using Superscent Oil as part of my recovery process just helps me shake off fatigue better.

Of course, being a topical liniment it only brings surface relief — first a cold sensation, then a warming one — and you still need rest and a gentle massage to revive strained muscles. But often, just a little relief is all you need to get a better night’s sleep so your body can heal itself. As most over-the-counter medication and supplements say, “If symptoms persist, consult your doctor.”

Check out my vlog review below: