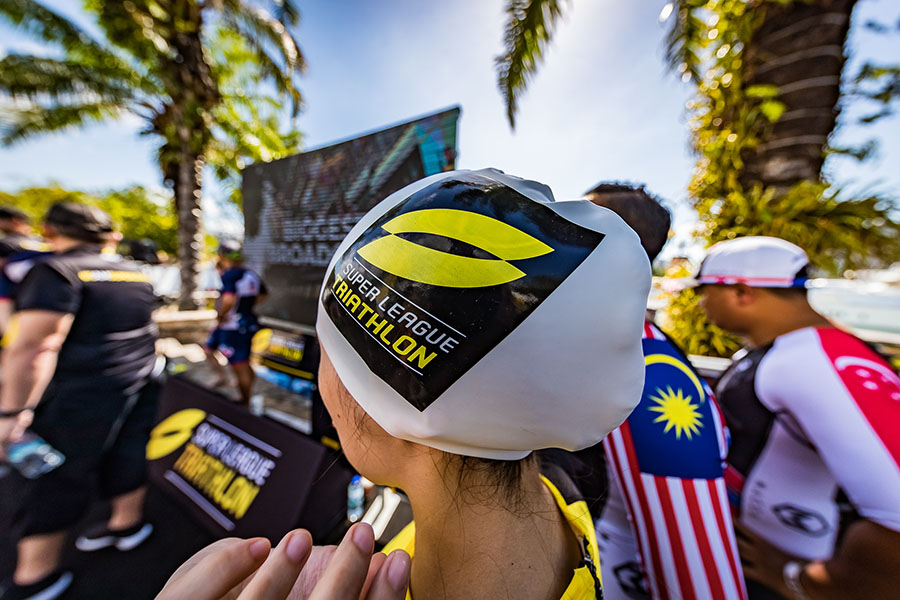 Some people would call it kismet — destiny, fate. In many ways my life always comes full circle as if to bring closure, or to create something new.

At Super League Singapore, my first triathlon since suffering from overtraining for two years, the distance would be roughly the same as my first ever triathlon so many years ago. And since previously I worked on Super League Triathlon through its first year, this time I was coming as a participant. Cheers to new beginnings, hey?

What I raced wasn’t properly an age-group race, although many of us racing were age groupers. It was called the Corporate Team Relay and Relay Enduro, and MX Endurance had fielded four teams of three members each. After all meeting up for a satay dinner al fresco at Lau Pa Sat on Thursday night, the teams were finalized and I was assigned to “MX Endurance Red” with Kimie from Malaysia and Sufian from Singapore.

MX Endurance is a diverse and truly global endurance community, and I’ve been a part of it since 2013 (when it was called MaccaX). Anywhere I’ve been around the world I’ve been able to touch base with an MX member or two, and the support is so great especially when racing far from home. We also have access to experts and coaches and a whole wealth of information and training resources so we can be the best athletes we can be. At the same time, it’s not all about going fast, but also about having fun doing a sport we love.

Being a frequent visitor to the Little Red Dot, I knew if you don’t intend to go elsewhere in Singapore then staying in Sentosa would be a good idea (because that’s where the race would be held). However, I also had (non-triathlon) friends to see and some shopping to do — and food is cheaper on the “mainland”. So it was easier to stay along Telok Blangah Road and just cycle into and out of Sentosa.

It was also nice to see so many Filipinos out there watching the races over the weekend. We had Claire Adorna and Kim Kilgroe with wildcard entries into the women’s pro race, and a large number of juniors racing the U19 enduro.

While my main race is in four weeks’ time, it was good to get a race in here and hit two birds with one stone: knock off the rust and make all possible mistakes, and have a good excuse to watch the pro races in person.

Check out my full vlog below:

So far you have three chances to do the age group racing that Super League Triathlon is offering at its Qualifier races: Bali on 23-24 March, Poznan on 28-30 June, and Penticton on 21-25 August. These short formats are a completely different animal from Olympic to Ironman racing. While the long races we’re used to are all about energy conservation and trying to go fast for a long time, these super sprint distances require you to redline all the way. I haven’t done a lot of intensity in the past few years, so I’ll need to add that into my training leading up to Super League Bali.

I don’t really want to drag this blog post out for too long, so I will just put up some more photos from the racing we did.