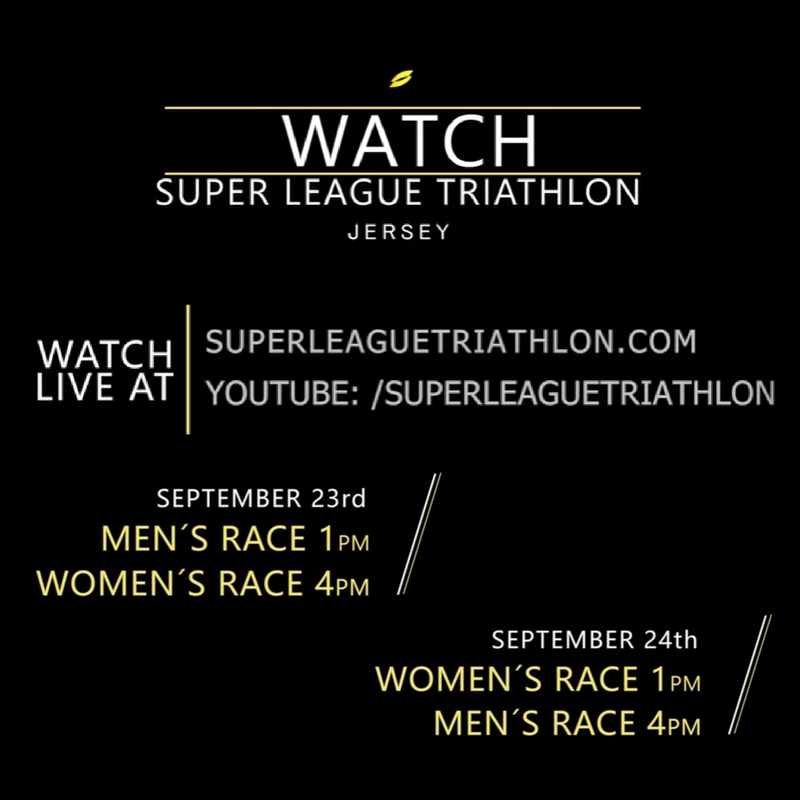 Is it that time of year again? Super League Jersey has crept up on us and suddenly it’s happening this weekend 23-24 September 2017 on the island of Jersey. Click after the fold for streaming schedules and more details!

Jersey is a British crown dependency only about 50 miles off the French coast, so its weather is warmer than, say, London at this time of year. It is however not in the tropics, so the conditions for this race will be wildly different from that of the inaugural event at Super League Hamilton Island.

Super League Jersey will also host the first women’s races, featuring the multi-talented London Olympics gold medalist Nicola Spirig and USA queen bee Katie Zaferes among other world and regional champions. I’m actually quite excited for the women’s races to unfold. I’ve already seen the men race Super League Triathlon’s unique formats; I’m super interested to see how the depth of the women’s field holds up. We may yet see some surprise winners!

In the men’s races, Super League Hamilton Island champion Richard Murray and runner-up (and two-time ITU world champion) Mario Mola are back, while third placer Jake Birtwhistle also returns after having missed the ITU final in Rotterdam last week due to illness. My dark horse for this is Matt Hauser, who has just taken the junior ITU world championship and hopefully carries momentum into this weekend’s racing. Of course, Jonathan Brownlee couldn’t resist racing on (somewhat) home soil and while Alistair’s absence will be felt, this is shaping up to be an exciting weekend. I also really love how up close and personal Super League Triathlon gets with the athletes. If you are following their Instagram account, they went live with the first of the athlete arrivals yesterday. It was nice to see the athletes pulling their own bike cases and stowing them inside the vehicles volunteers from the Jersey Triathlon Club used to pick them up from the airport. That old-world rugged feeling is the soul of Jersey

While I’m not on the island this time around I still will be writing all about the races and the athletes. That’s because I don’t even have to be on Jersey to watch the action. Super League Jersey races will be streamed live on September 23 and 24 at 8pm and 11pm Philippine time, so it’s perfect to get all your tri buddies together and sit down in front of your Apple TV’s or Chromecasts to enjoy some of the best racing the sport of triathlon has to offer. Catch it all on www.superleaguetriathlon.com or on youtube.com/superleaguetriathlon — you can use the Youtube app to optimize your viewing experience!

Check out the full athlete roster here and let me know who your favorites are! Also, here’s the official program booklet I worked on. The TV broadcast schedules are being finalized but I was told it will also be available on free-to-air TV here in the Philippines, so stay tuned for further announcements!