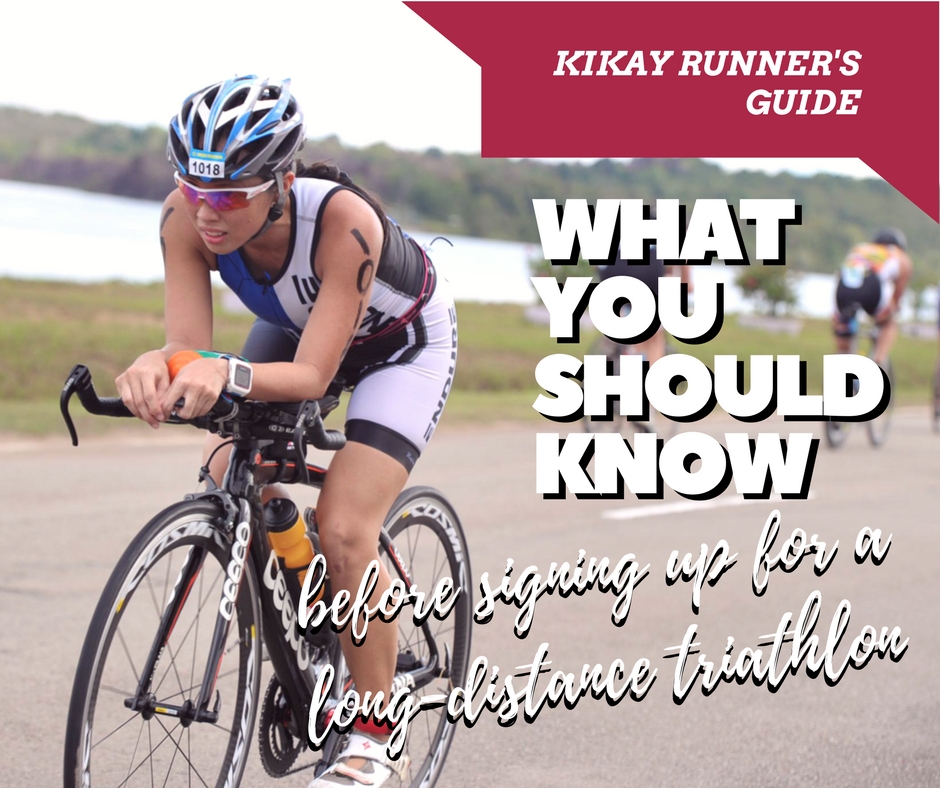 This year, the major long-distance triathlon organizer in the country laid down some new ground rules. In order to sign up for their upcoming Ironman Philippines, one must have done a half or full-distance triathlon between January 2016 to March 2018.

I regret writing here that this would be a cheaper way to do an Ironman. Unless you’ve been caught in the yearly vicious cycle of signing up for 70.3’s come October, you probably weren’t counting on having to do another race on top of the one you really want to do. I know a few experienced triathletes who have been waiting for a full Ironman but only race Olympic distance because they don’t like the Cebu and Subic 70.3 courses, or it’s too expensive to race a 70.3 every year. They pounced on the Ironman registration, but are now caught in a bind. (I know someone who has quit triathlon for now on principle because of this requirement which was laid down after they had registered.)

If you’re in this situation, you can either spend more money and sign up for a half, have your registration transferred to another Ironman in the region, or ask for a full refund.

While the organizer has a right to lay these requirements down for newbies, it still rubs me the wrong way as an experienced triathlete and ironman finisher that my 2014 Challenge Roth finish and most recent 70.3 Cebu race in 2015 don’t fall within the timetable — especially since other races within the region don’t have a similar requirement, and it’s a requirement that was set in place post-hoc. Anyway, it seems people like me are a minority, with many of the athletes already completing the validation requirement or set to do so.

This is why it’s so important not to get swept up in the hype that comes during registration season. I always consider a few things before I sign up for longer distances because I now know very well that I can’t rush the preparation my body needs. At this point, it’ll be three years before I even consider signing up for another half-ironman. (You might need less or more time.)

Why? Because I had been running for two years before I did my first minisprint triathlon. The following year, I moved up to sprint. The year after that, I did my first Olympic. And then I decided I’d do a half. It took me seven years to build up to a full ironman, given my work and other physical commitments. By then I had laid down a very deep foundation of aerobic endurance fitness.

So, here are the things you should know before you sign up for a long-distance triathlon.

What is my current level of physical fitness?

Most age-groupers come into the sport of triathlon later in life. With age comes medical conditions, especially if you’ve been sedentary a while. It really does not hurt to get a full physical work-up or an executive check-up, which can detect ailments that could be triggered or made worse by intense or lengthy exercise.

It pays to know yourself and be realistic. Also, understand that the sport will still be here years from now. You don’t have to move up in distance right away. Maybe you’re not ready, and that’s fine. If you really want to do long-course, then plan long-term to do it in a few years when you’ve gotten fitter and can handle more volume and intensity.

(Just a side note: you don’t even have to do long-course. Doing an ironman is not a requirement to be a triathlete, after all.)

What do I need to do to get fit for that triathlon?

Before I signed up for my first half-ironman, I could cycle 100 kilometers in one go, and by then I already had two marathons under my belt. I’d also been swimming more than 2,000 meters every training session already. I’m conservative like that. Others, like Kuya Kim Atienza, signed up without even knowing how to swim — but they had an action plan to learn and build up leading into the event.

I already had a training plan and strategy in mind before signing up, because if I was going to spend that much on a race I was going to make sure I could absolutely nail it.

Can I afford it?

Not a few people were hit by buyer’s remorse after registering for Ironman Philippines, especially with its hefty P35,000 price tag. It’s so easy to enter your credit card details; you don’t even feel the physical money leaving your wallet.

Then you realize that’s probably worth your entire tax-deducted monthly salary. The half-ironmans cost half as much, but still in the range of P18,000.

Before you sign up, make sure your budget can handle this cost, as well as others associated with it. I’m talking about:

Remember, this race will always be here for you to enter even a few years from now. Don’t let FOMO (Fear Of Missing Out) push you to make financially unsound decisions.

Do I have time to prepare for it?

Especially for triathletes with families of their own, you need to factor in not just the time you need to train, but also time for family and work. There are only 24 hours in a day and increased training will take time away from something. Make sure your family understands that you’re doing this for only a period of time so that you can achieve your goal. Remember that it’s only training, so if your wife or kids need you around for something big like a birthday, recital, or even an emergency, do your best to be there for them.

Do I understand the risks of participating this sport? Do I have contingency plans in place?

Not many realize this but long-distance triathlon is an extreme sport. You are pushing your body to its limits for a prolonged period of time under conditions where it would otherwise stop. Much of the training involves mantras such as “Shut Up, Legs”. You add Type A personalities into the mix, and situations could arise where an athlete who should stop or not start in the first place continues until their body gives up. There are other situations that turn life-threatening, such as bike crashes, or getting swum over.

Understand and prepare to face these risks. This is why being on a health plan and having life insurance is important. It’s better to have it and not need it than need it and not have it. This way I know that if I need medical treatment my family doesn’t have to worry about the costs. And if I end up gone they will be taken care of…

Doing a long-distance triathlon is a pretty major decision that will impact how you live for many months. I just want to make sure you know what you’re in for. If you’ve thought about all of these things and are still determined to sign up, go for it!