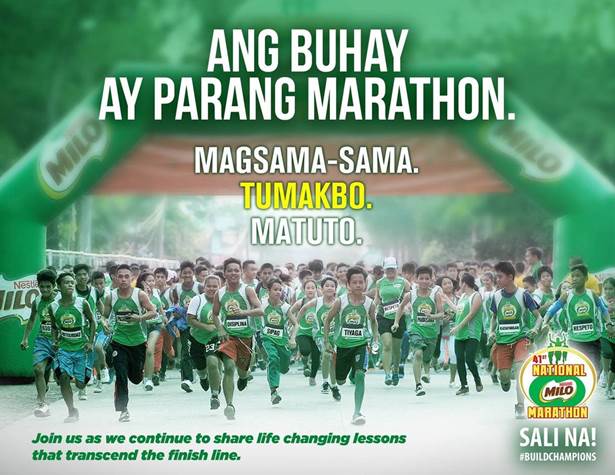 It’s that time of year again! The 41st National Milo Marathon kicked off with its first race in Urdaneta last July 16 as the first of 16 races all around the Philippines, culminating in the Milo Marathon finals to be held for the first time in Cebu City on December 3.

Since 2010 I’ve been involved in getting the word out about the country’s longest-running marathon series, and every year Milo Marathon never fails to inspire runners old and new alike to keep running. This year’s theme is “Magsama-sama, Tumakbo, Matuto”, based on the premise that values such as discipline, resilience, and determination — learned through running — can be applied in our journey in life.

I was invited to the press launch where I broadcast some of the Q & A on Facebook Live. Watch it here:

Three new locations are on the roster this year: Urdaneta, Laoag, and Roxas. The annually rotating list of cities allows people from nearby regions to get that running experience the National Milo Marathon is known for.

This is the second time the national finals have been held in the Visayas, and the first time for the Queen City of the South to host it. As a side effect though, Cebu runners will have to go elsewhere in the country to qualify because there will be no elimination leg held in Cebu.

In other innovations, this year the Milo Marathon will have Age Group category winners at the national finals. Not only will runners be competing against the entire field for overall placing, but they can also compete against those in their age group. (This is an age group title only and not eligible for cash prize, but it’s a nice carrot to chase.)

Milo continues its Help Give Shoes advocacy in partnership with the Department of Education which marks eight years since they first started donating shoes. This year, the advocacy will be donating 5,000 pairs of brand-new running shoes to underprivileged school children.

Are you racing the National Milo Marathon? Let me be the one to tell you, “Kaya mo ‘yan.” Good luck!