Hello, folks! Sorry for the long blog post absence (two weeks!). I’ve just gotten back from Germany which was a much-needed break from routine. I know I was supposed to be in the heat of training for Challenge Vietnam at that point. However, in my life while things don’t always work out as intended, they do always work out for the best. 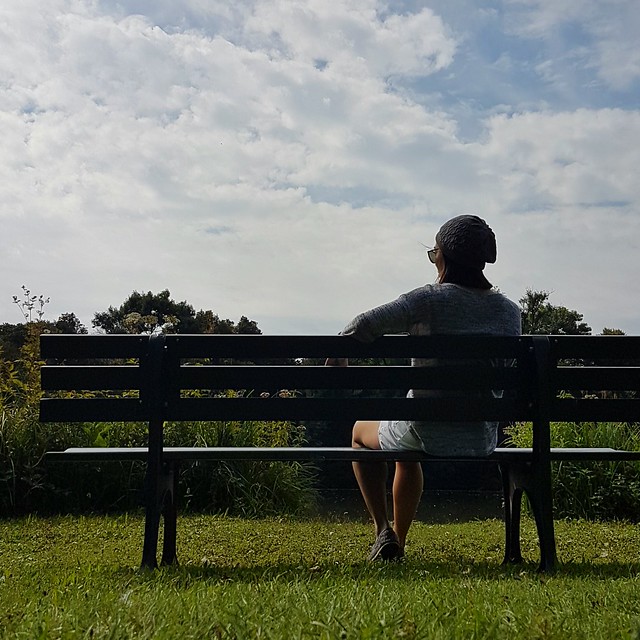 “Life is like a box of chocolates. You never know what you’re gonna get.”

I have a confession to make: my body hasn’t felt the same since I completed Challenge Roth 2014.I was at my fittest then, and Roth tested me to the limits; since then I’ve just felt things going downhill. I maybe compounded this by racing Ironman 70.3 Cebu only two weeks later, driving me deeper into the first cycle of fatigue. Then I did Supercamp at T*** and not wanting to lose the fitness gained, kept on going with training.

I was puzzled by my body’s response to the training. I mean, I had trained and raced well in 2013 and 2014 while holding down a full-time very physical job at the gym. Last year, I quit my gym job to focus on providing writing and back-end services. With less non-specific physical stress, I should have seen better results from my triathlon-specific training. Instead I kept getting derailed by illness and malaise. I wasn’t recovering well enough between sessions, either: I never felt the high levels of energy I had enjoyed two years previously.

But I kept going throughout 2015: trying to peak for three half-ironmans, but failing to achieve my best at each one. The warning signs were there, with illnesses hitting me with more frequency and with longer-lasting periods laid off from training because I was either too sick or not recovered enough.

This year I decided to focus on marathon training until June, then go into triathlon training to peak for Challenge Vietnam in September. I did fine with the marathon, but after that it was like my body wanted to shut down. It said, “Nope” every time I tried to up my bike training.

Then I got sick near the end of July, and that effectively was the death-knell for Challenge Vietnam. I was in denial though, as evidenced by my posts the past few weeks. It was only when I headed out to Europe, did some leisurely running in beautiful weather, and watched Challenge Regensburg, that I realized I was in no way fit enough to race in September. 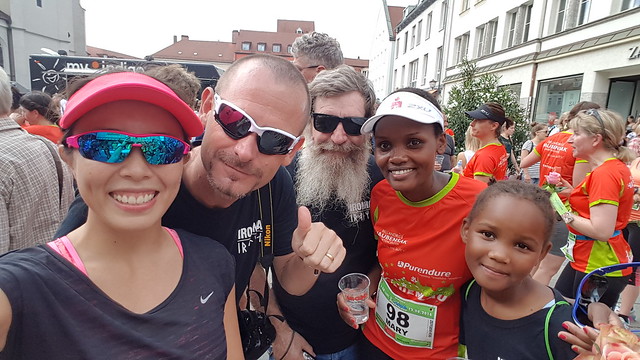 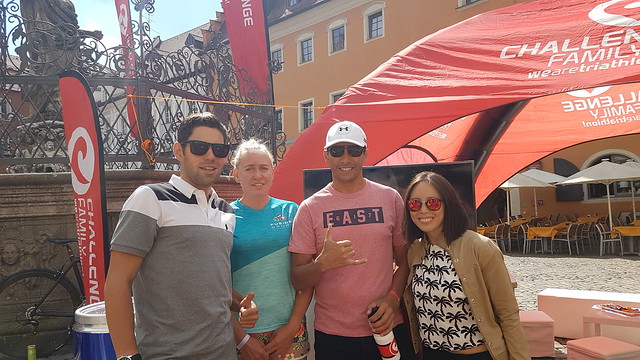 the pros at Challenge Regensburg

Every time I tried pushing the pace on those runs my heart rate would skyrocket and I would overheat — yes, even running in 21-degree temps! My resting heart rate, which I track with Fitbit, was still elevated from my normal levels as well. My asthma also acted up.

I had a few days after Regensburg to wander through Bavaria before coming home, but even the low-grade physical exertion of merely walking approximately 20,000 steps a day made me feel tired and sniffly by the end of the day. 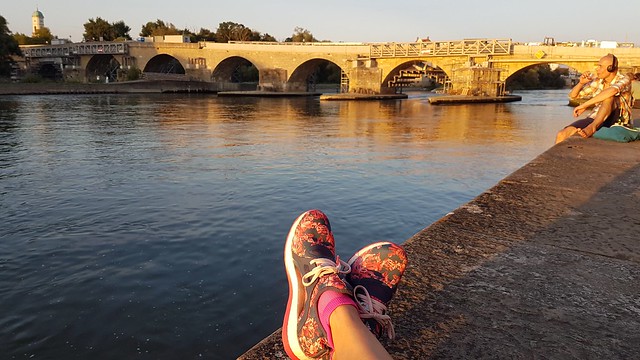 the Old Stone Bridge at Regensburg 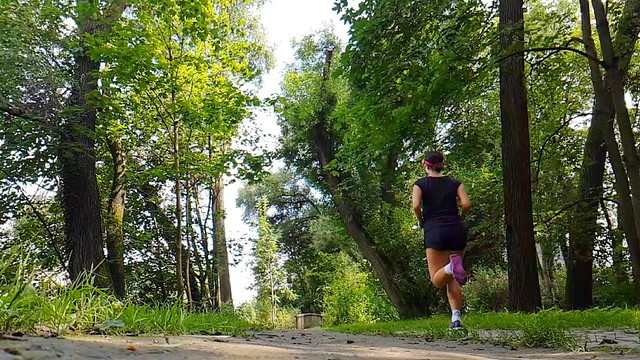 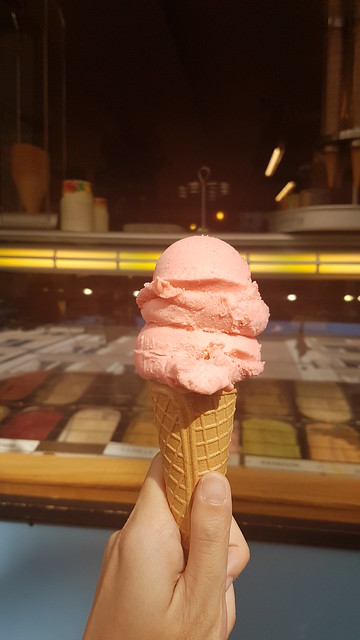 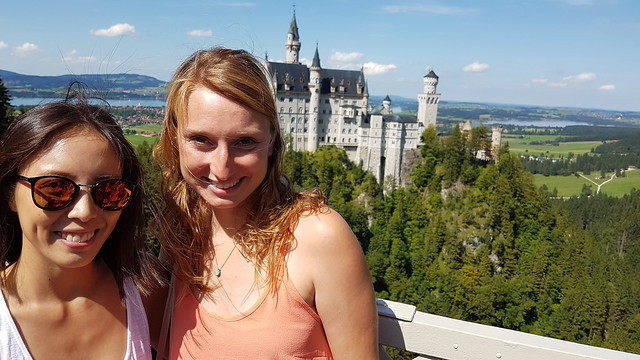 with my Roth host Mona at Neuschwanstein Castle 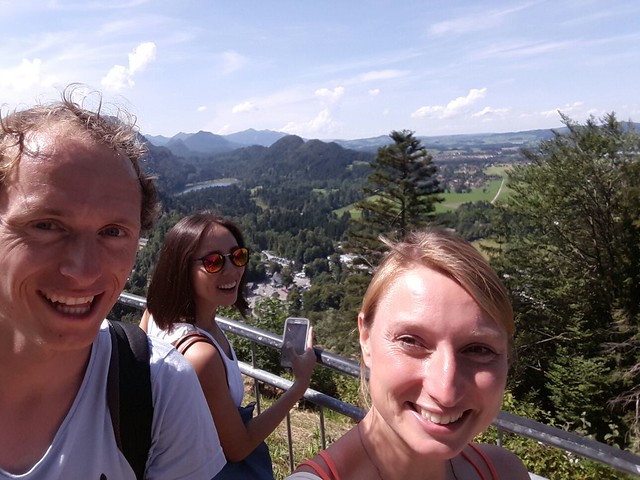 the view from the Marienbrucke 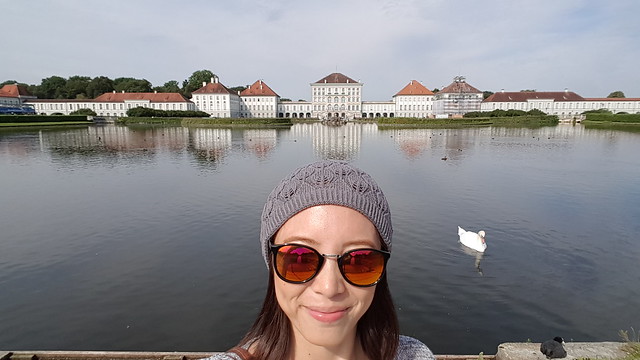 So I raised the white flag and emailed the Challenge Vietnam organizer to see if I could be put on a relay team. I quote from my message: “I can do swim, bike, or run, but looks like I’m not well enough to do all three by Sept. 11.”

Pending confirmation by one more member of the relay, I’ll be doing the swim leg.

(Just a sidenote: while booking my flights to Vietnam, I had some trouble getting extra baggage allowance for my bike even if I were willing to pay for it. Now that I don’t even need to bring my bike, I guess it worked out for the best.)

If athletes were bread, I would be flour, eggs, and water that haven’t been mixed yet. I know I have all the ingredients; I just can’t seem to put them all together, at least not in time for the intended race. And the elevated resting heart rate makes me concerned as well; I fear that if I push it by racing when I’m not ready, I might do lasting damage to my heart.

I think that after going at it full steam ahead for so many seasons, this is my body putting the brakes on before I reach the end of the line. And now I need to back up and take a different track. 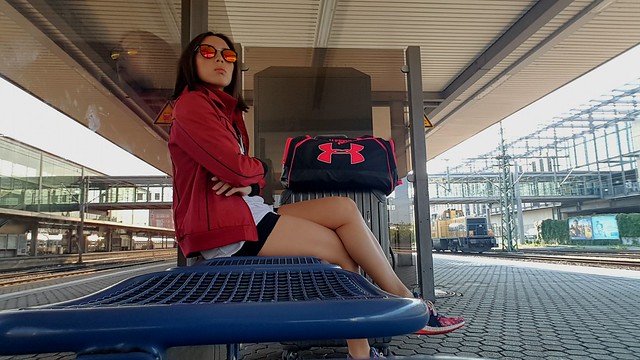 How’s that for extended train metaphors?

There’s a difference between being fit and being healthy. You can be fit without being healthy, and conversely be healthy without being fit. Fitness is having the stamina, speed, and muscular ability to perform the sport of choice. Health is the absence of disease or infirmity as well as a state of complete physical, mental, and social wellbeing. I don’t want to let the pursuit of fitness affect my health. So I’m going to need to take a big step back and look at the big picture. There’s a lot to enjoy in life that doesn’t involve getting to a finish line.

Maybe next year I’ll be healthy enough to toe another start line.