Mcsy Jugo asks: Hi I know this may sound odd but you see my daughter has taken running as well and she does her regular training and mileage run in our place in Cainta and she runs all the up to Sta. Lucia Mall and back.

Along the way she couldn’t help getting catcalled and whistled at every time she runs that route. Sometimes I run with her, well of course no one would dare do it when I’m around her running as well.

I would appreciate it very much if you can take it up in your blog on how to deal with those kinds of situations: the how to’s during, avoiding, and preventing.

I’m so disappointed right now since our would-be president seems to encourage it as well!

Some people say, “What’s the big deal? Take it as a compliment!”

Um, no. Being on the receiving end of catcalls is annoying at best, terrifying at worst. Some women feel validated and flattered, but those women are in the minority. The rest of us feel vulnerable, and when you’re out on the streets just on your own two feet there’s not a lot you can do. 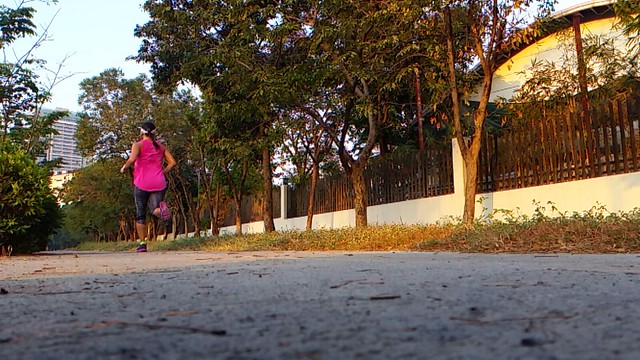 Avoiding catcalls by wearing shapeless, baggy, or concealing outfits only made me warm and uncomfortable and hampered my performance. I don’t feel safe running out from my doorstep because there are too many “tambays” in our area; I drive to Bonifacio Global City to do my runs. One of my guy friends said that if he had daughters he would just buy them treadmills to avoid getting catcalls.

This is not fair. Why can men run where they please and wear what they please and not be harassed by sexual comments, but women can’t? Why should women have to modify their behavior to feel safe? Why do catcallers feel they have the right to comment on a woman’s body?

It’s because even in this supposedly matriarchal society, people still see women as inferior. We are also permissive of the same attitudes and behaviors (a “rape culture”) that perpetuate catcalling and similar acts of sexual harassment.

Oh, yes. Catcalling is sexual harassment. Additionally, catcalling is part of the violence pyramid in rape culture. It all starts with the beliefs and attitudes that women are sexual objects and not people. It progresses to verbal expression (catcalling), then physical expression (rape and sexual assault).

Of course, women should do what they need to feel safe, and if that means taking a “safer” route or running in groups then I am all for it. However, just like rape, it is not a woman’s fault if she is catcalled. Nobody asks to be catcalled by virtue of what they are wearing, or what time of day they are running, or the location where they happen to be running. Sexual harassment and sexual assault are wrong, and the fault for that lies solely with the perpetrators.

At the same time, know that you can take action against catcallers.

Let me tell you a story. Once while I was at Pico de Loro for The Next Step Triathlon Camp, I ran alongside a construction site on a hillside. One of the workers called out to me: “Hi, sexy!” I was wearing shorts and a tank top — normal, functional wear for a runner, right? I ignored him.

I had to come back into the resort the same way. While I was huffing and puffing up the hill, I heard him again. Even worse, I think his pals were cheering him on. As I passed a crew of security guards making their rounds, I told them about the incident.

When I arrived at the resort grounds at the end of my run, the activities manager approached me. Because I had stood up for myself, the resort had rounded up the construction workers. I had made a point. YOU DO NOT TALK TO WOMEN THAT WAY.

In Quezon City, catcalling is a violation of an ordinance, punishable by fines and jail time. You can register your complaint with the Women’s Desk at the nearest police station.

The larger culture disrespecting women also must be addressed. We’re on the back foot these days with this incoming president. Here’s what he’s done just in the last four months:

You may see this modeled by more men in society. It’s our duty to call them out on such things. These attitudes and behaviors have no place in a society that should see women as equals.

This is Nikka Melchor’s performance art. This is her protest. Read the signboard beside her. It’s overwhelming how…

So, long story short, here’s what you can do about catcalling: