This week I head off to the Bintan Triathlon with Raymund Magdaluyo, one of the guys responsible for bringing Powerman Duathlon to the Philippines. I’m in full support of developing multisport in all its facets in the Philippines, and duathlon is definitely one of the more accessible multisport options out there. (It’s easier to learn to ride a bike than to swim, haha!)

Based on last year’s successful first event, this year there are two races in the series — and there’s plenty of time to get ready because they’re happening in November and December in more accessible venues. 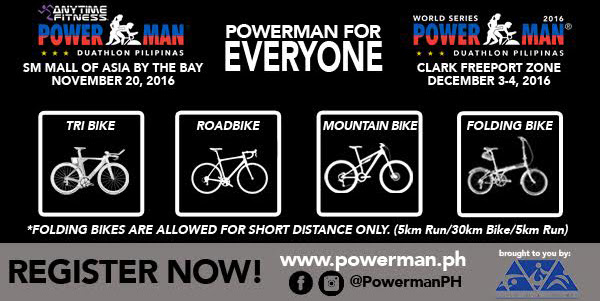 The Anytime Fitness Powerman Duathlon Pilipinas Asian Invitational will be held on November 20 at the SM Mall of Asia. This will consist of the Powerman Short distance of 5km run-30km bike-5km run. Anytime Fitness is also running a Power Training program to help people prepare for the races with Power Camps and Power Clinics featuring guest coaches and mentors.

Then the Powerman Duathlon Pilipinas World Series will be held on December 3 and 4 at the Clark Freeport Zone, Pampanga. This will feature a Powerman Short, the Powerman Classic distance (10km run-60km bike-10km run), Powerkids for ages 6-16, and Powerteens. Clark Freeport is the ideal venue to host the target 3,000 participants and their families.

Just like the Bataan International Triathlon, part of the proceeds from Powerman will go toward buying bicycles and other gear for the Batang Tri grassroots program that supports young individuals without the financial means to enter the world of multisport. Batang Tri is also supported by Blackbeard’s Seafood Island and is currently headed by Coach Jojo Macalintal, Coach Ivan Leopando, and Coach Melvin Fausto.

Register now at Powerman.ph for early bird rates, or check out Powerman Duathlon Pilipinas on Facebook and @powermanph on Instagram for information and updates.