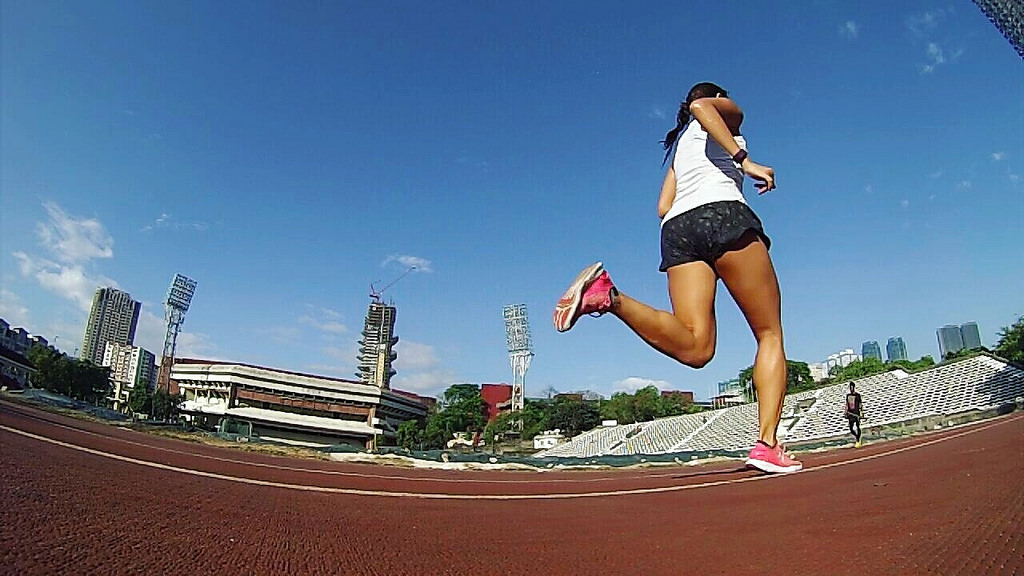 Hi guys! It was rather stressful last week so apologies if I haven’t gotten around to writing about some stuff (NatGeo Run, boostManila, and the list goes on…). I have been trying to keep up my training volume in the midst of the heat wave and also trying to recover from the NatGeo Run, which was quite a shock to my body.

The early gunstart really messed up my body clock and I’ve been waking up around 10am rather than my usual 7am (without alarm clock). As a result, I’ve had to shuffle my work and training schedule, and the blogging fell by the wayside. I’ll try to catch up this week without being spammy. Because of my late starts it’s also been difficult to get up early enough to train outdoors without frying in the process.

I went to ULTRA last Wednesday for some track work and even though it wasn’t even 6am yet, the sun was already shining on the tartan. I got through that workout, but I was useless the rest of the day with a headache caused by heat and dehydration.

I have instead sought solace in indoor training, including an indoor pool where I first tested out a swimsuit from Dolfin. I also attempted to do my long run on Friday on a treadmill, but midway through felt like throwing up. In the end though I was able to get some mileage work done yesterday, when I did 20 kilometers at a real steady and easy pace. Absolutely no intensity involved. watch out for my review!

the relief of finishing a long run

I had no idea why I was so fatigued all week until I realized I had been carrying a huge weight on my shoulders. “Stress is stress” and the human body is unable to distinguish between the stress of training load, versus emotional stress.

As we all know, the national elections are coming up in less than two weeks’ time and tensions are high. About 40% of Filipinos eligible to vote are still undecided on their choice for President, while the rest have taken their stand, myself included.

I don’t always agree with Mr. Celdran, but on this choice we are of the same mind.

The vote is a precious thing. My vote weighs exactly the same as your vote, regardless of who you are or how much you’ve done for the country. But even though it is one vote, it’s not just one vote that’s at stake. It’s the future of millions of Filipinos and I believe we all have a duty to vote based on being well-informed about the issues at stake, the people who would ask to be put into the highest office in the land, and the kind of effect each of them would have on our culture and our future.

(If you’ve been following my Facebook you know who I’m voting for. I’m not asking you to vote the same, just saying how I came to choose.)

I’m a peace-loving Filipino who believes in the decency of each of our countrymen, and that we can strive to do better and be better without the threat of punishment or dictatorship. I’m for obeying our laws and also protecting our civil liberties. That these seem to be under threat because of candidates who have stolen from the nation’s coffers and demeaned the weakest of our countrymen has been alarming to me.

But lately the weight of the world has been lifted off my shoulders. You know why? It’s not because my candidate has shown himself worthy (which I think he has in all his years of government service). It’s because I’ve been reminded of where my joy should lie.

“Though the fig tree should not blossom, nor fruit be on the vines, the produce of the olive fail and the fields yield no food, the flock be cut off from the fold and there be no herd in the stalls, yet I will rejoice in the LORD; I will take joy in the God of my salvation.” Habakkuk 3:17-18

Regardless of who we’re voting for on May 9, God is still in control.

Now I’ve spoken my piece and that’s the last you’ll hear from me on this blog about this. Back to training for me. 🙂

These people make me proud to be Filipino.