I hope you’re not living under a rock, and have already seen the front page of today’s newspapers… 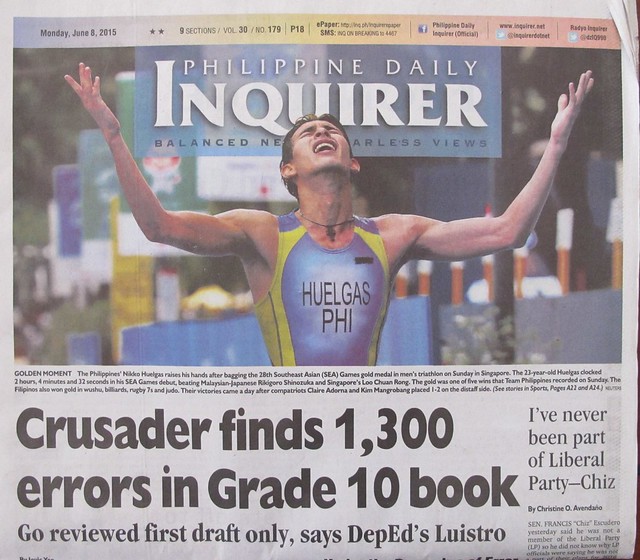 Triathlon on the front page of the Philippine Daily Inquirer

That’s certainly an image that will embed itself into the minds of many readers and decision-makers who may have never thought triathlon to be a productive use of resources.

But now we have this: our country’s first gold medal at this SEA Games was won in triathlon. The gold medals won by Nikko Huelgas and Claire Adorna are also our country’s first ever in triathlon. This was a dream ten years in the making, ever since the SEA Games held its first triathlon event in 2005. A young Arland Macasieb took home the bronze, while on the distaff side Sandra Araullo scored a silver; triathlon was a nascent sport in the country then. In 2007, George Vilog was silver medalist and Arland took the bronze, while Sandra again won silver and Maria Lucas the bronze. Eight long years then passed before triathlon was again contested at the SEA Games — but this time, the team was ready.

I’ve sat in on many conversations with people from the Triathlon Association of the Philippines, so I can’t remember all the details (I forget things when I’m not in interview mode). I can still recall being told that there was a huge chance for the Philippines to excel in triathlon, at least within the region, and that they were pouring funding into the program. TRAP President and Philippine Olympic Committee chairman Tom Carrasco says as much in this interview.

I am glad there were more people who thought triathlon was a worthy investment — not only the Philippine Sports Commission for authorizing funding for our national team triathletes to head to Portugal for the last two years for training, but also the private backer that helped fund a further training camp in Australia this year.

When it comes to being competitive internationally, if you want to be the best you have to train with the best. Exposure to Europe’s best triathletes whipped Nikko Huelgas and Kim Mangrobang into shape, while Australia’s Gold Coast is the hotbed for its triathlon juniors and helped Claire Adorna and Jonard Saim become seasoned competitors. The investment paid off for the SEA Games, but it also bodes well for the future development of these athletes as well as those who will come after them. Hopefully this exposure will stir up more interest in the sport, expanding the funding and the talent pool to choose from for decades to come.

As SWIMBIKERUN.ph’s Carlos de Guzman pointed out yesterday, there were those who thought triathlon would never net the country any wins, and that resources were better spent on popular sports like basketball. Not that I don’t think basketball isn’t a fertile ground for medals and international acclaim… but there are other sports and athletes that need the help and attention more.

Our country abounds in talent; that talent just needs to be nurtured. I am proud that Mary Joy Tabal took home a silver for the women’s marathon last Sunday; as the reigning MILO Marathon queen she is the best our country has to offer and I’m so happy that there are those who supported her along the way.

There are still many viable medal contenders who don’t get as much support, such as Isidro Vildosola, a Paralympics hopeful who was sent to compete in London at a Paralympics qualifier. A group of concerned citizens crowd-funded his trip through a Facebook page — but this isn’t sustainable. There needs to be a better program to identify athletes in need, and provide them the appropriate support.

“It’s just sport! Aren’t there more pressing needs in our society, like poverty?” some may ask. To that I say, why do we always view poverty only in its economic aspect? There is also poverty of the mind, and poverty of the soul — when people give up on themselves and their dreams.

There are many things that don’t work as they should in this country. But when I see something that does, against all odds, due to the efforts of good men and women, it gives me hope that we can still make a difference everywhere else in society — that it just takes a little elbow grease, sticking to your principles, and plenty of support from like-minded people. When we make art, education, and sport flourish, we uplift people and give them purpose. And that enriches the country.

So you see, when one wins, we all win.