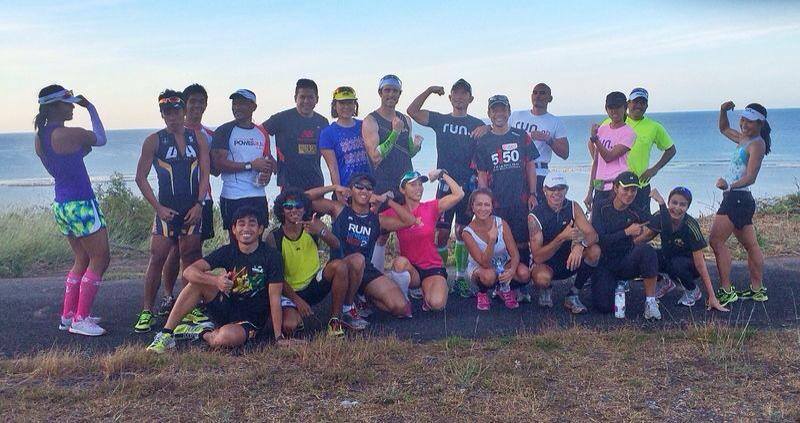 This is part of a new series about training venues for running, cycling, and swimming near Metro Manila.

With only a two-and-a-half hour drive separating it from Metro Manila, Subic Bay is the preferred location for a bunch of races on the multisport calendar. It’s hard not to see why: this former U.S. base has open water, safe and well-paved roads whether flat or hilly, and plenty of good accommodation options. In fact, you’ll also often see local tri teams organize training weekends in Subic, especially before major races. Now, it’s also a training base for elite and pro athletes both local and foreign.

During one training camp in Subic

Running is great in Subic. It’s the site of the annual Subic International Marathon, so there is pavement aplenty. For flat roads the boardwalk area is great for a daily morning or evening jog and there are convenience stores aplenty to refill your bottle if you’re thirsty. For speedwork, intervals, and hard runs that need to be done on softer surfaces, you can use the track oval at Remy Field for an entry fee of P20. If you like hills, head towards Camayan Beach Resort, where the Challenge Philippines course is open to run on. Did you know there are also trails to run on? The Pamulaklakin Forest Trail is one of the more well-known ones right behind Binictican housing. My good friend Rene (Jazzrunner) is an avid trail runner and has a great post about it, which you can read here.

Subic is a safe haven for cyclists, whether you’re using a tweener or mountain bike with flat bars, or a roadie or tri bike. That’s because traffic rules are strictly enforced, there’s a dedicated cycling/running lane in the commercial area, and it’s not as urbanized as Manila. There isn’t a lot of flat road except that near the airport, but most people come to Subic to train on the hills anyway, especially if they’re training for the Subic International Triathlon or Challenge Philippines. You don’t even have to stay within the freeport zone; going one way leads you toward the hills of Bataan, while going another way leads you toward Masinloc — a route used during the Audax rides held throughout the year.

yet another training camp weekend in Subic

As for swimming, there are numerous beach resorts in Subic from where you can do open water swimming. Camayan hosts the swim start for Challenge Philippines and they have a permanent buoy line that stretches out for about 300 meters. All Hands Beach is another resort with buoy lines marking an area safe to swim in. The Sands of Triboa (formerly Dungaree Beach) is currently closed due to massive construction works, but it also used to be a favorite spot for swims and race simulations.

If you’re in need of a pool session, the newly-opened WOW Pool behind Remy Field is a 50-meter lap pool with shower facilities and free parking. They have annual (P15,000) as well as day rates (P250/4 hours), and when I was there they were running a promo rate for Mondays, Wednesdays, and Fridays (P125/1 hour). They can be sticklers for hygiene, though, so don’t expect to be able to go from cycling or running straight into the pool. There is also the 25-meter Brent School pool, which is where most of the Subic-based elites swim.

I had the WOW pool to myself.

As I mentioned earlier, there are plenty of hotel and lodging options in Subic at a wide range of prices, so there’s a place suitable for every budget.

There’s a reason why two Aussie pros have decided to make Subic Bay their training base as they join races in the region. Flights from Clark or Manila allow them to hit all the major Asia-Pacific races, and Subic’s got everything they need to get themselves into fighting form.